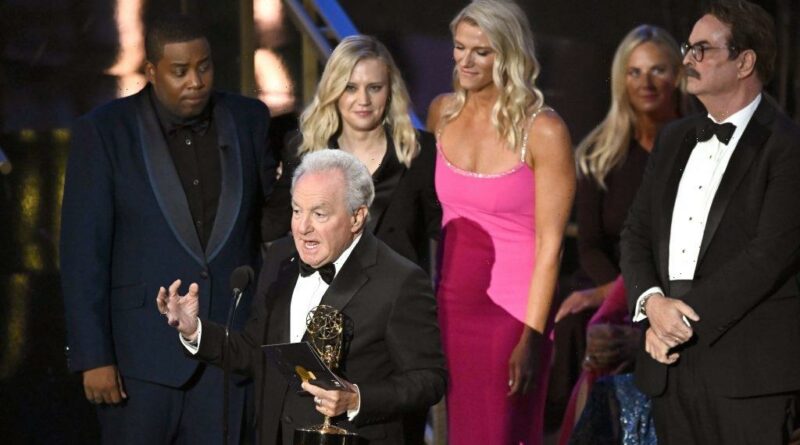 The Television Academy is taking another stab at resolving its Emmys variety talk and variety sketch category conundrum. The org announced Tuesday that it would scrap those two controversial categories and introduce two new ones: Outstanding talk series, which will center on shows that focus on “unscripted interviews or panel discussions between a host/hosts and guest celebrities or personalities”; and outstanding scripted variety series, which focuses on “programs that are primarily scripted or feature loosely scripted improv and consist of discrete scenes, musical numbers, monologues, comedy stand-ups, sketches, etc.”

In creating these two new categories, the Television Academy is likely hoping to solve two debates at once: What to do with the decline in sketch shows, which have shrunk to a point where they can no longer sustain a separate Emmy category; and how to separate topical and news-focused talk shows from more variety-centric talkers.

Whether or not this will resolve that debate is unclear. Programs like “The Tonight Show Starring Jimmy Fallon” could fall under either category: It features unscripted interviews, but it also includes plenty of loosely scripted improv, musical numbers, monologues, comedy stand-ups and sketches.

According to the new description for outstanding talk series, “A talk series can include scripted elements and other aspects of a variety series such as monologues, musical performances, etc., so long as the main intent of the program is interviews/discussions.” That would seem to keep shows like “Tonight” and “The Late Late Show with James Corden” in the talk field, in addition to obvious contenders like discussion-focused “Last Week Tonight with John Oliver.” But the new scripted variety category also notes that it “may occasionally feature unscripted elements, but the main intent of the series is scripted or performed entertainment.” That’s where the shows formerly in the sketch field, like “Saturday Night Live,” would now reside. But could that also include “Tonight” and “The Late Late Show”? This could make for an interesting debate in the coming months.

The Television Academy has struggled to figure out what to do with variety talk and variety sketch in recent years. In December 2020, the org announced that it would merge the two back into one category — and then, after uproar from high-profile figures in the variety field, reversed course a few months later.

But a change has been on the docket for some time. In September, TV Academy chairman/CEO Frank Scherma said the org would “make some sort of decision” soon. “It definitely is one of the things that’s on the agenda for this coming year,” he said. “As television continues to change across the board, we have to try to change with it. And we have to look at those things. We’re talking to our network partners. We’re talking to the streamers, we’re talking all across the board.”

But, as Academy president/COO Maury McIntyre added, there was no easy solution — hence the delay in finding one.  “If it was an easy call, we would have done it already,” he said. “There is a lot of interest and we want to make sure we do it right. Clearly we made a decision a couple of years ago [in announcing a talk/sketch category merge] that people were not happy with and we revisited it. That just shows we’re willing to listen to our partners with what they have to say. We will have to make a decision at some point.”

Variety talk and variety sketch series were awarded in one category until they were split in 2015. That decision came as the number of sketch shows were on the rise, with series like “Inside Amy Schumer,” “Portlandia,” “Drunk History” and “Key & Peele,” in addition to stalwart “Saturday Night Live.”

But that trend ultimately was short-lived. And rules introduced in 2019 determining the number of nominees in each category had a negative effect on both variety talk and variety sketch fields: Under the setup, categories with between 20 and 80 entrants compete with five nominees; for six, there must be at least 81 entrants. If there’s below 20 entrants, it’s a sliding scale for even fewer nominees.

In 2022, just eight shows were submitted in variety sketch, which led to just two nominees for the second year in a row: “SNL” and “A Black Lady Sketch Show.”

Meanwhile, variety talk is also seeing its numbers drop. This past year, only 19 shows were submitted in the category, but the TV Academy rounded that tally up to 20, in order to at least maintain five nominees.

Still, with shows like “Desus & Mero” and “Full Frontal with Samantha Bee” ending, and the fate of CBS’ 12:37 a.m. timeslot still up in the air after James Corden departs “The Late Late Show” this spring, the talk tally is likely to continue to drop. And it doesn’t help that some shows that might have entered that category, like “My Next Guest Needs No Introduction With David Letterman” and “The Problem With Jon Stewart,” opted to enter the hosted nonfiction series or special field instead.

The TV Academy has also had to contend with grumbling from inside the variety talk ranks about the wide difference in tone and structure from the shows: Topic-based shows like “Last Week Tonight With John Oliver” compete against variety-focused shows (“The Late Late Show With James Corden,” “The Tonight Show Starring Jimmy Fallon”), talk shows with a heavy dose of politics (“The Late Show With Stephen Colbert,” “The Daily Show With Trevor Noah” and “Late Night With Seth Meyers”) and shows with a bit of everything (“Jimmy Kimmel Live!”).

Here are other rule changes:

Cap on nominations-round voting: “The number of selections each voting member is allowed to make per category in first-round voting will now be capped at the number of nominations specified for that category. Members will no longer be allowed to vote for an unlimited number of selections in any category.” This should keep nomination voting more specialized and weed out the temptation to vote for everyone (or, more concerningly, everyone on your employer’s docket).

But also, “a trigger has been added to all tracked categories such that during any year in which the number of submissions for each track is 20 or more, the category will automatically be split into separate categories for that year. In 2023 there will be 16 categories with tracks, which could potentially be split.

Previously announced — Game shows come to primetime: As revealed in August, the Television Academy (the West Coast org formerly known as the Academy of Television Arts & Sciences) and the New York-based National Academy of Television Arts & Sciences has agreed to migrate game show categories from the Daytime Emmys to the Primetime Emmys beginning next year. Moving forward, the new Primetime Emmy category for outstanding game show “will be awarded to programs with game elements that primarily take place in studio and involve mental challenges.” As part of the move, the Primetime Emmys will also add a category for outstanding host for a game show, “awarded to the “master of ceremony” host(s) for a continuing performance in a game show.”

Previously announced — The end of the hanging episodes rule: As announced in June, “the Hanging Episode Rule has been eliminated; only episodes that premiere on a platform available to a national audience by May 31 will be Emmy-eligible.” The required number of episodes from a series must premiere nationally by May 31 to be eligible in the current Emmy competition: Six episodes are required for series in animation, comedy, drama, variety, short form and reality categories; three episodes are required for documentary series and hosted nonfiction series; and all episodes are necessary for limited series and anthology series.

Among other rule changes:

• The position of Costume Consultant is generally not an Emmy-eligible credit but may be reviewed on a case-by-case basis.

• In documentary programming, “recreations, including the use of performers or animations, if such recreations are factbased and used for illustration purposes, are limited to a percentage of not more than
50% of the documentary special or series, with the remaining content being primary source documentary elements.”