Given the sell-out crowd of 1700, Neil Gaiman’s conversation with us at Perth Concert Hall on Sunday night felt strangely intimate.

This is the author and screenwriter who brought us The Sandman comics, Coraline, Good Omens with Terry Pratchett plus its recent TV adaptation, American Gods (TV adaptation continuing), The Ocean at the End of the Lane, and will soon recreate Jim Henson’s classic The Storyteller series for TV. 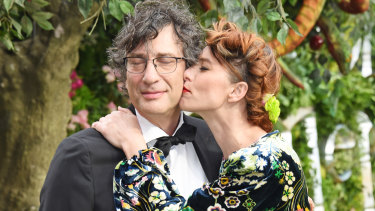 Neil Gaiman and Amanda Palmer at the premiere of Good Omens in London last year. Credit:WireImage

For Perth Festival, part of a national tour, he appeared against the backdrop of a cloudy night sky, surrounded by bare hanging lightbulbs like stars and beneath an enormous chandelier possibly intended to look like a moon (but which he described as a giant wedding cake).

In the gentle, mellifluous voice that’s made for memorable narrations of his own books on audio, Gaiman told stories of his life, read short stories and poems (including his yet-unpublished new children’s book) and went through a big stack of questions from the audience.

He gave festival-goers insights into both his home life with singer-songwriter wife Amanda Palmer and his four-year-old son Ash, and his work life, which he described as “seven different full-time jobs” what with all the screen projects he has on the go, as well as a sequel to the 1990s bestseller Neverwhere, and a new children's picture book currently being illustrated.

It included a few reveals:

What he wouldn’t reveal…

As to whether there’s going to be a new adaptation of Neverwhere, Gaiman “can’t confirm or deny”; but he does hope a theatre adaptation of The Ocean at the End of the Lane will soon make it from the West End overseas to Australia.

Neil Gaiman appears at the Capitol, Melbourne, on Tuesday and will also present a Bushfire Recovery Event with Amanda Palmer on March 8 at Forum Melbourne before continuing his tour in the United States.