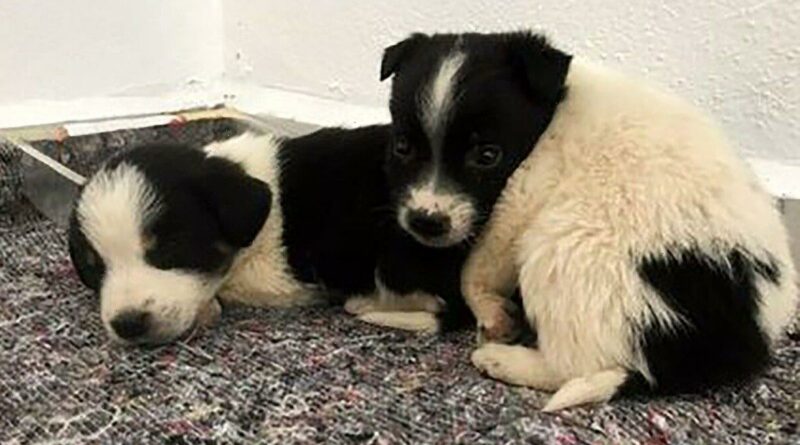 Puppies rescued after being found amongst rubbish

The pups, who are around five weeks old, were found in the cardboard box on top of a bin the day it was due to be collected after they were heard desperately crying. A rescuer from a shelter run by UK non-profit organisation Dog Desk Animal Action CIC took them back to the centre with her to warm them up and feed them puppy formula.

There were fears the tiny pups, who have not yet been named, would not survive after they were found on April 21.

But they are building up their strength and will be placed with other puppies at the shelter when they are ready.

Michelle Robertson, director of Dog Desk Animal Action CIC, said: “Nilufer came across the puppies while walking in the town.

“She heard their ‘mews’ and followed the sound to a cardboard box sitting on top of a bin.

“Inside were two black and white pups, not yet weaned.

“They had been callously left out with the garbage on rubbish collection day.

“She took them back to the clinic, kept them warm and gave them some puppy formula, of course they were both very hungry.

“It’s always a worry whenever pups come in so young with uncertain histories and without mum.

“But as each day passes the concern for their health becomes less as we watch them growing stronger.

“They are doing incredibly well, are still having bottle feeds but have started a weaning process.

“They will live away from the other puppies until they have had their parasite treatments and vaccinations.

“Once that happens they will move to our motherless puppy block where they can interact with the other little ones.”

The non-profit organisation eventually hopes to find loving homes for the pups in Turkey.

Dog Desk Animal Action CIC set up the shelter in Turkey following a crackdown on stray dogs this year.

It has 600 dogs in its care and is looking for people to sponsor them to help with costs.

Ms Robertson said: “Currently we have 600 dogs, all safe from vulnerable situations on the streets.

“For example our last intake came from an area where dogs were being injected with poison.

“Many of our dogs have been shot, run over, orphaned or abandoned by owners without the slightest idea how to fend for themselves.”