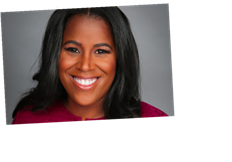 #BlackGirlMagic is taking over the C-suite. TIAA just named JPMorgan Chase’s Thasunda Brown Duckett as its new CEO — the second Black woman tapped this year to lead a Fortune 500 company.

This comes off the heels of news that Starbucks executive Rosalind Brewer was appointed last month to take helm at Walgreens. Because, what’s better than one Black woman CEO? In the words of JAY Z: two.

“I often think about the day my father asked me to help him plan his retirement, and I had to tell him, ‘Dad, your pension is not enough,’” said Duckett in a statement. “Now, thanks to his work and sacrifices and the support of many others who have guided me throughout my life and career, I am blessed to join TIAA, which has paid out over $500 billion of lifetime income and other benefits since its founding in 1918.”

In her most recent role at Chase, Duckett led a banking network with more than $600 billion in deposits, 4,900 branches and over 40,000 employees. “I am extraordinarily grateful for the opportunity to lead a company that has helped millions of people retire with ‘enough’ to live in dignity and excited about the opportunity to help TIAA chart its next 100 years,” she continues.

“Thasunda is widely recognized as an exceptionally dynamic and inspirational leader,” said Ronald L. Thompson, Chairman of the TIAA Board of Trustees. “She brings invaluable experience leading and growing large, complex businesses, setting and executing strategy, improving client experience and attracting and developing talent. Equally important, she is deeply mission-oriented, with values that reflect those of TIAA, including a passion for financial inclusion and empowerment.”

The 47-year-old exec will succeed Roger Ferguson, who announced his retirement from TIAA in November after a 13-year run as CEO. Ferguson will remain in his role until Duckett officially joins the firm on May 1.