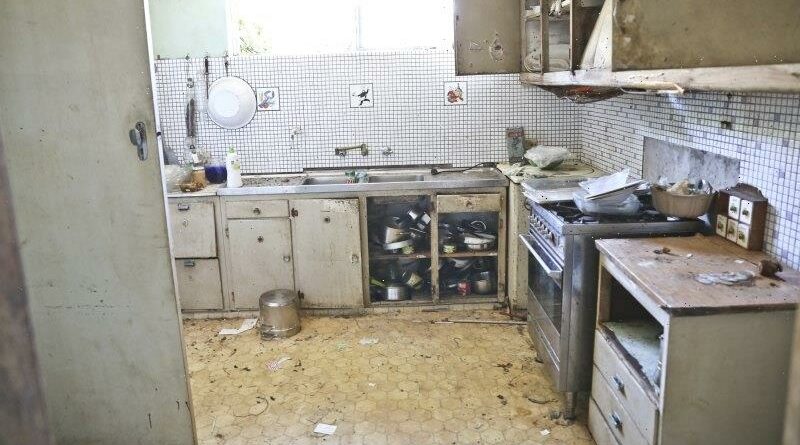 Buying the worst house on the best street may be a tried and tested way to get into a competitive property market, but the appeal of the fixer-upper lost its shine in 2022.

Rotting floorboards, crumbling ceilings and overgrown backyards can be a challenge for any renovator, let alone when faced with soaring building costs, and tradies and supply shortages. 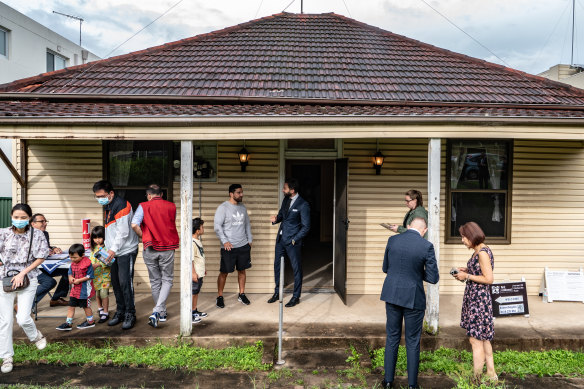 Some fixer-uppers and knockdowns drew strong interest in 2022, but such results were few and far between.Credit:Flavio Brancaleone

Not to mention a property market downturn fuelled by rapidly rising interest rates that are driving up mortgage repayments.

Still, there were plenty of original-condition houses, and even derelict properties, that found buyers this year, even if bidding wars for fixer-uppers became fewer and further between.

The stand-out result for the year was the $80 million sale of a Toorak mansion, which set a new house price record for Victoria despite its poor condition.

The mansion, on one of Melbourne’s most sought-after boulevards, was purchased by crypto king Ed Craven for $80,000,088. 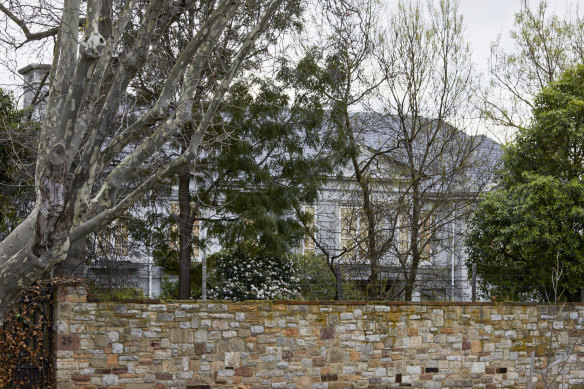 This Toorak house reset records when it sold for $80,000,088 to Ed Craven.Credit:Louis Trerise

His buyer’s agent, Kim Easterbrook, told The Age at the time that the house was in a derelict condition, and that Craven planned to build a new home on the block.

Then there was the Brighton fixer-upper with a price guide of $46 million to $50 million.

Despite the sky-high price tag, the property was marketed as an opportunity to renovate or extend, or knock down and rebuild a new dream home. It is still listed for sale.

At the comparatively more affordable end of the market, a rundown three-bedroom Richmond home — with cracked walls, damaged floors and a heritage facade preventing a knockdown — sold for $1 million early in the year. 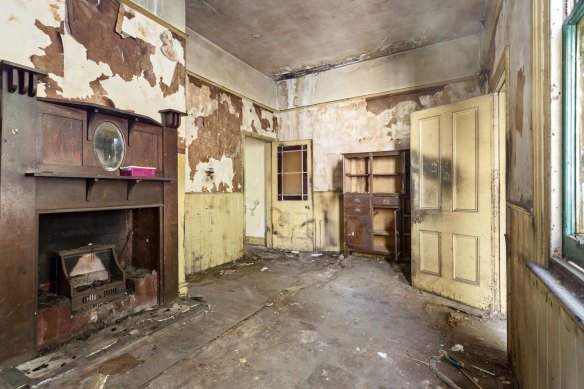 In Sydney, early in the year a dated three-bedroom semi in Bondi, with peeling wallpaper throughout, sold for $5.65 million at auction. Strong competition pushed the price $1.15 million above the guide.

The home drew interest from six registered bidders who were keen to capitalise on the 508-square-metre block in a prime location. 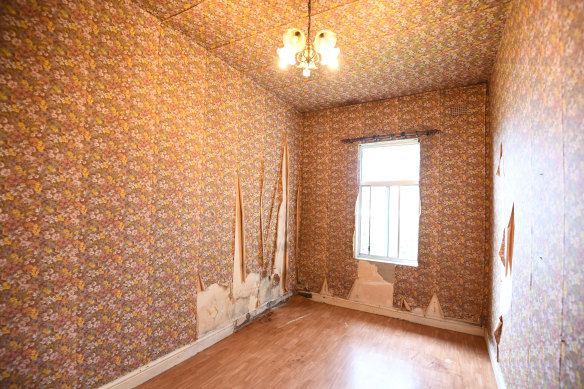 The deceased estate was in the same family for five decades and sold for $5.65 million.Credit:Peter Rae

Interest in fixer-uppers pulled back throughout the year, but there were exceptions. 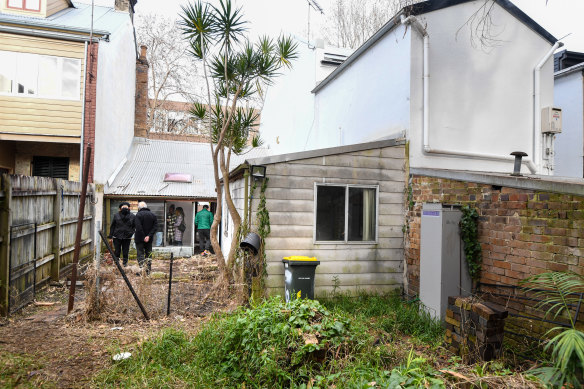 A rear shot of the 182-square-metre block in Surry Hills.Credit:Peter Rae 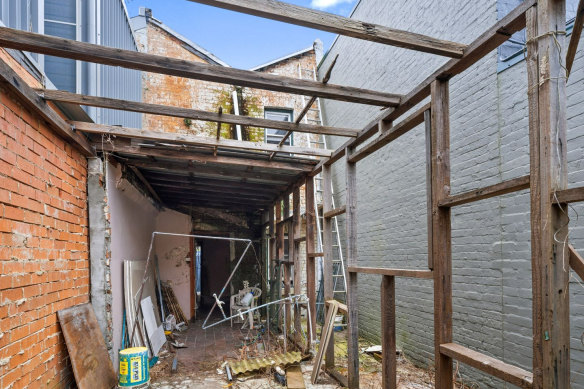 Scaffolding at the back of the Redfern home.

The two-bedroom terrace was extremely dilapidated, and there was little more than scaffolding at the rear of the home.

It sold through Mark Foy of Belle Property Surry Hills in post-auction negotiations after it was passed for $1 million. 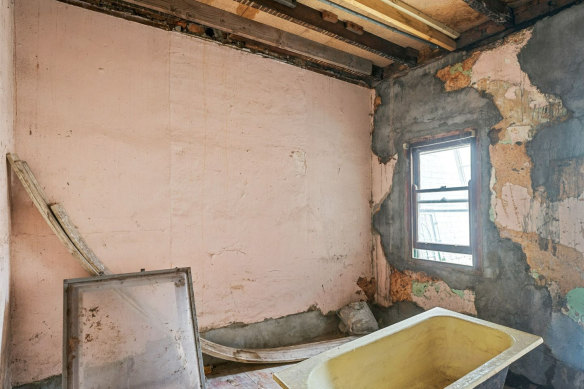 “Interest was really light. It had full DA approval, but we only had a couple of people register for auction and there wasn’t much bidding at all,” he said.

“Builders are still buying, but it’s your wannabe dream-home owner-builders that are just not in the market, they just don’t want to try their hand at it right now, and they would usually make up about half the bidders in a really strong market.”

Back in Melbourne, an art deco home in Bentleigh East sold for $1.26 million the same month. The four-bedroom house was unfinished and was in an unliveable condition, and had some graffiti throughout.

Later in the year, a storm-damaged federation semi on Sydney’s lower north shore sold for $1.76 million.

Nine buyers turned out to compete for the two-bedroom Neutral Bay semi, undeterred by the damaged ceilings, walls and floors – a result of a hailstorm in 2019. 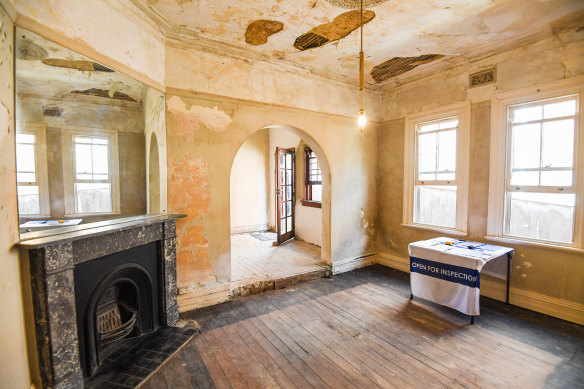 This Neutral Bay fixer-upper drew three bidders at auction, but not all homes that need work are as hotly contested now.Credit:Peter Rae

Two first home buyers and their mother outbid two other active bidders for the home. They were delighted with the result, and felt rising interest rates and building costs had reduced the level of competition for such properties.

In October, an uninhabitable four-bedroom house in Marrickville sold to an investor for $1,303,000. A few weeks later, an unliveable two-bedroom semi nearby sold for $1.2 million. 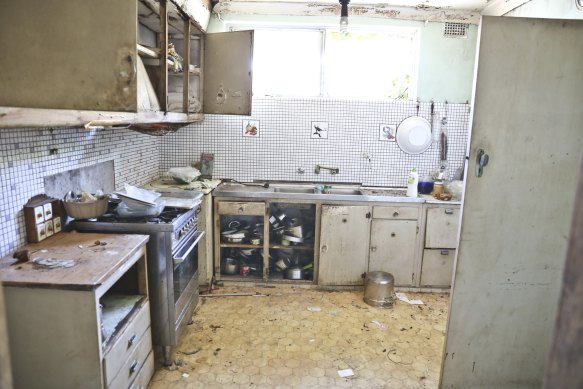 The vendors said no renovations had been carried out at 13 Wallace Street, Marrickville, since the four-bedder was bought in the 1960s.Credit:Ben Rushton

Back in Melbourne, a three-bedroom house on a corner block in Northcote recently sold for $1.06 million. The home with a damaged facade, an original kitchen and floral walls and floors had hit the market with a price guide of $1.1 to $1.2 million.

“Across the board, all renovators at the moment, or in the last … six months, have struggled because building costs have gone up, there’s a lack of tradespeople around and labour costs are going up.

“We had a lot of buyers going back eight or nine months ago who probably would have paid $1.1 million or $1.2 million and still renovated it comfortably.”

Across the country, a four-bedroom house in Brisbane’s Chermside sold for $890,000 after being marketed as an opportunity to renovate or detonate.

Thought to have been built in the 1950s, it was described as a blank canvas for the new owner to remodel or rebuild.

The three-bedroom house just steps from the beach was dubbed an opportunity for investors and future builders and featured wood panelling, wallpaper and retro carpet throughout.

Most Viewed in Property