Home » Lifestyle » The best white flowers for your garden 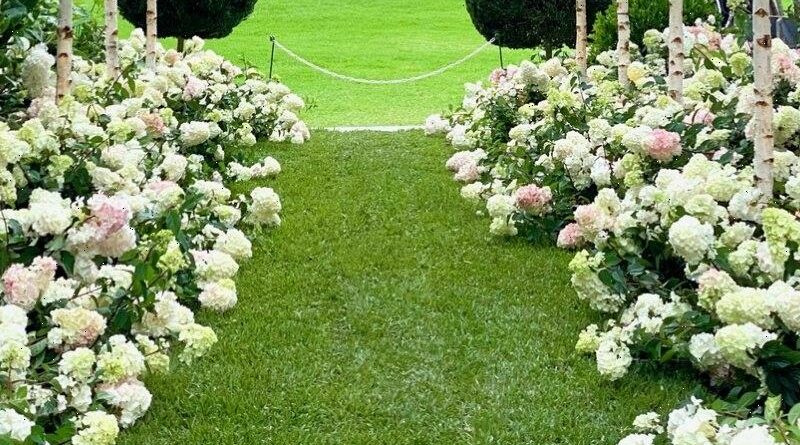 Surely the most famous white garden in the world is at Sissinghurst. 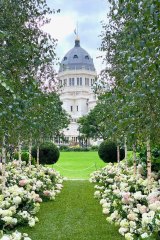 At the Melbourne International Flower and Garden Show, Robert Boyle, for Warners Nurseries, framed the dome of the great Exhibition Building with blooms.Credit:Robin Powell

Vita Sackville-West set about creating it after dreaming of a barn owl sweeping across a pale garden in the summer twilight. As was their way, her husband Harold Nicholson provided the structure for the space with yew and box hedging, and Vita filled it with white flowers and silver foliage that glowed against the green backdrop.

I’ve never seen it with a barn owl, sadly, but Sissinghurt’s White Garden is undeniably magical, and endlessly inspirational. On a recent trip to Victoria I saw several contemporary versions.

At Stonefields Paul Bangay has mixed references to Iranian gardens with a touch of Vita in his White Garden. In a rectangular space walled by a pleached hornbeam hedge, a long slim pond features a swerve of white waterlilies and punctuation points of white iris. There are crabapples in the corners, and a froth of white flowers behind a low box edge. Originally these were roses, but as the hedge grew and shade increased, the planting was changed over to shade-loving hydrangeas, wind anemones and aquilegias.

There is full sun on the Pale Border at Frogmore, which is why it’s not a White Border. Owner Jack Marshall believes that white flowers look too quickly scorched under the Australian summer sun. Instead he augments whites with palest lemon and pink. So in autumn pale dahlias bloom among a froth of white cosmos, Queen Anne’s lace, gaura, tiny white asters and nicotiana, whose flowers start white and fade to a very soft pink. The garden sparkles against a background of hedging. 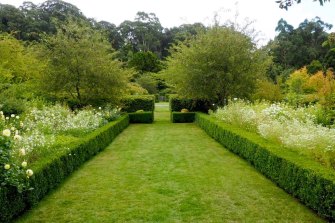 Frogmore, the garden on the southern edge of Wombat State Forest in Victoria.Credit:Robin Powell

At the Melbourne International Flower and Garden Show, triumphantly back after a two-year hiatus, Robert Boyle, for Warners Nurseries, framed the dome of the great Exhibition Building with an avenue of silver birch underplanted with the relatively recent French hybrid of Hydrangea paniculata called “Sundae Fraise”. This sun-hardy hydrangea, to a slightly floppy 1.2 metres high and wide, has cone-shaped blooms that start off green, turn white through summer, then age to various shades of pink in autumn. The birch garden was one section of a six-part design which took out a Gold Show Garden award for Boyle and Warners.

Yet of all the white gardens I saw my favourite was the simplest: David Glenn’s party of white wind anemones at Lambley Nursery. Under an avenue of columnar ornamental pears, in two wide beds flanking a grass path, masses of A. “Honorine Jobert” swayed and nodded in the breeze, catching the light drifting through the sparse canopy. The effect was breathtaking.

“Honorine Jobert” is one of the tall wildflowers, with flower stems to a metre, well above the clumps of foliage. Flowers are pure white, with golden stamens and chartreuse centres. Flowering starts in late summer and continues into autumn. It should be cut back to the ground after flowering, leaving space for spring bulbs to emerge – white ones, of course.