The suspense is already proving too much for some fans of The Cry, who have admitted to turning to the book the gripping BBC thriller was based on for answers.

Episode two of the mysterious drama, which follows anguished mother Joanna, played by Jenna Coleman, and her husband following the disappearance of their baby son, ended with a twist – as a snatched conversation between the couple made it clear they have lied to police about what happened.

Viewers had previously seen Joanna panic as she and her husband Alistair returned to their car after popping into a shop, to find that baby Noah had vanished from his car seat in the back while they were gone.

But at the end of Sunday night’s episode, after Alistair was seen urgently telling his wife ‘we’ve done the right thing’, the scene was played again, only this time the camera panned back to reveal that baby Noah wasn’t in his car seat when his parents arrived at the shop – and the couple staged his disappearance.

‘I’m going to have to download and read the book right now!’ one fan tweeted as the credits rolled on a twist that put Noah’s parents firmly in the frame over his disappearance. 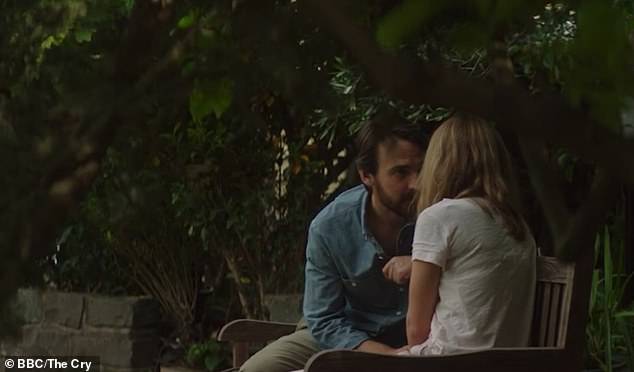 In a snatched conversation at the end of episode two of the BBC One drama, Joanna asked her husband if they would have done ‘anything differently’ if they could go back in time. He reassured her that they were doing the ‘only thing that makes sense’

Suspense: Viewers have admitted to downloading the book in search of answers, as they were struggling to know who to trust in the TV drama

‘Just downloaded the book to read because I can’t wait for the next episode,’ another chimed in.

They were among dozens of fans who admitted they’d given into suspense by downloading or googling the plot of the Australian author Helen Fitzgerald’s 2013 novel, which inspired the big-budget adaptation.

‘I’m ashamed to admit it but I’ve just Googled the ending to the book… if the program [sic] has the same ending as the book then I’d never have guessed it!’ 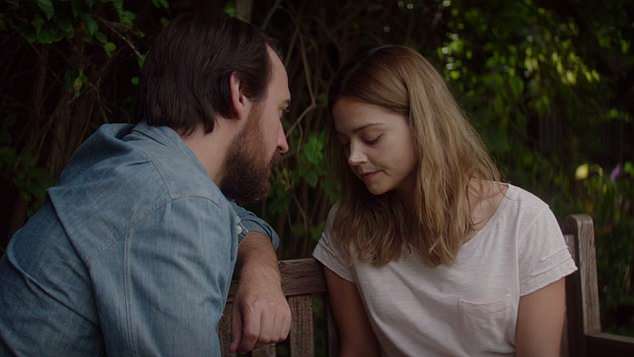 The closing scenes in the second episode of BBC drama The Cry, left viewers even more confused over the fate of missing baby Noah, as it became clear Alistair and Joanna are not telling the truth about what happened to their baby boy 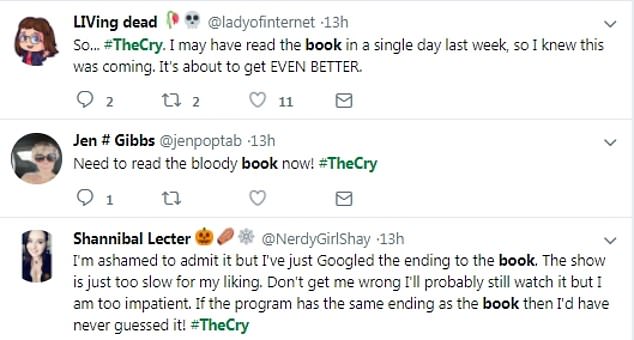 Dozens of viewers tweeted to say they’d given into suspense and downloaded the book, or googled its plot, to find out exactly who is responsible for baby Noah’s disappearance 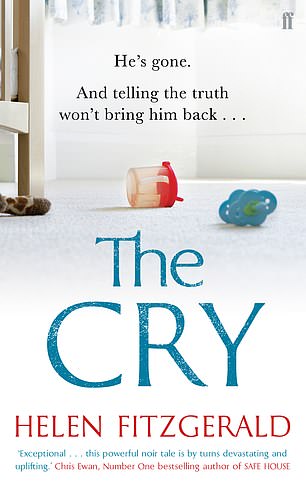 Fans have turned to the 2013 book the drama is based on, by the Australian author Helen Fitzgerald, for answers

The show has been keeping fans guessing from the start, courtesy of a non-linear narrative that jumps backwards and forwards in time – taking viewers from the early days of Joanna’s romance with married Alistair one minute, to their fraught flight to his native Australia with their new baby Noah the next.

Throughout, the flashbacks have been interspersed with scenes of Joanna in a courtroom, apparently on trial – although what exactly she is accused of remains unclear.

While the first episode saw both Alistair and Joanna behaving in ways that viewers branded suspicious, the finger of blame appeared to be pointing towards his ex-wife, Alexandra, who had taken their daughter, Chloe, back to their native Australia triggering an acrimonious custody battle.

The opening episode saw Alistair and Joanna on the long flight to Australia – with an incessantly crying Noah in tow – to confront his ex-wife.

Given that Alexandra’s ex-husband cheated on her with Joanna, the fact viewers know she set up a fake Facebook profile so that she could stalk his new partner online, and that she was seen acting suspiciously around Alistair and Joanna’s holiday cottage before they arrived, she seemed the most likely candidate to be behind Noah’s disappearance.

But Sunday night’s cliffhanger suggested she could be innocent and that her ex-husband is deliberately trying to frame her, with Joanna seen telling Alistair that ‘Chloe, Alexandra… they don’t deserve this’. 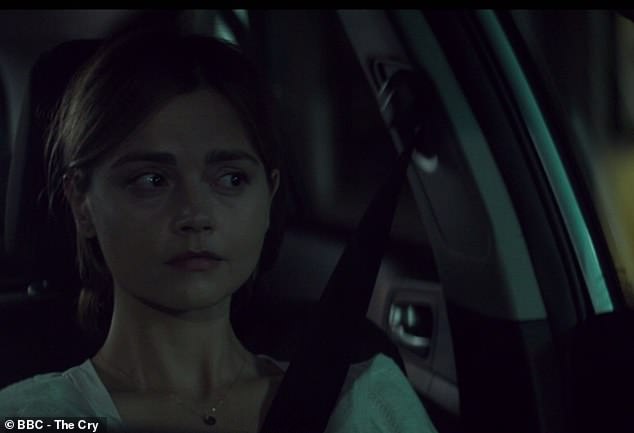 When Noah’s ‘disappearance’ first aired, viewers saw Joanna (played by Jenna Coleman, pictured) follow her husband Alistair into the shop, then return to the car and panic when she realised Noah’s car seat was empty 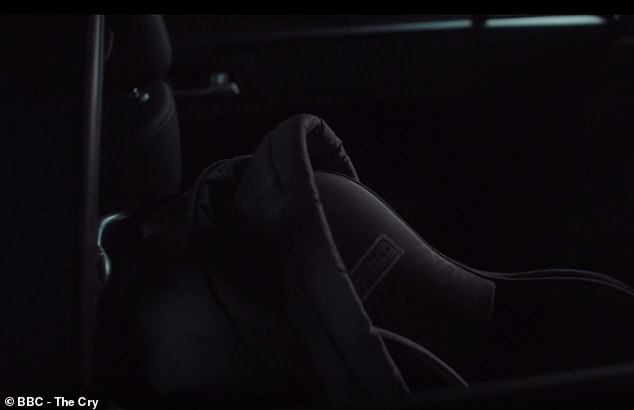 But the scene was played again in Sunday night’s episode, and the camera’s panned back behind Joanna after the car pulled up outside the shop, to reveal that baby Noah had never been in there at all 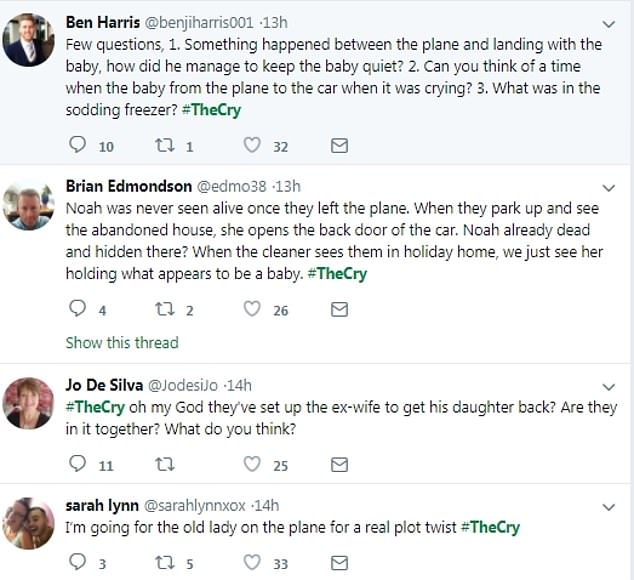 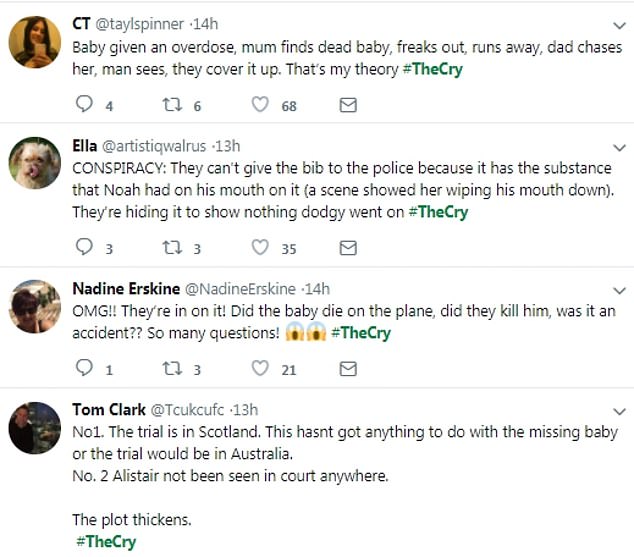 The frequent flashbacks, suspicious characters and multiple red herrings have seen fans flood Twitter with their own theories over what happened to missing Noah 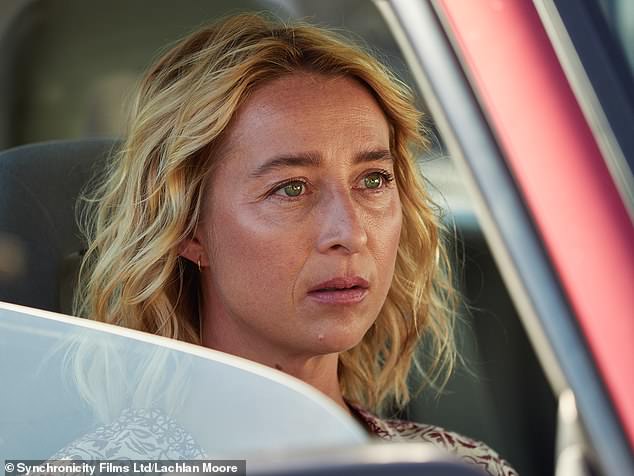 At first the finger of blame appeared to be pointing squarely at Alistair’s ex-wife Alexandra, but Sunday night’s cliffhanger ending suggested her former husband could be trying to frame her for his baby son’s disappearance

Fans have flooded Twitter with their questions following the latest twist – as well as their own theories for what happened to baby Noah.

Many said the couple were deliberately setting up Alexandra to take the fall so that Alistair could gain sole custody of their daughter, Chloe.

‘Oh my god they’ve set up the ex-wife to get his daughter back? Are they in it together?’ one tweet said.

Other fans pointed out that baby Noah had not actually been seen alive on camera since the young family disembarked their stressful flight from the UK to Australia, prompting some to speculate that Joanna’s desperate attempts to soothe her screaming baby on the plane had actually led to an accidental overdose.

One fan posted: ‘They’re in on it! Did the baby die on the plane, did they kill him, was it an accident?’

Another viewer pointed out that as the courtroom scenes from Joanna’s trial indicate it’s being held in Scotland, it doesn’t have anything to do with Noah’s disappearance, which occurred in Australia.

‘This hasn’t got anything to do with the missing baby or the trial would be in Australia,’ they said.

The Cry returns Sunday at 9pm on BBC One