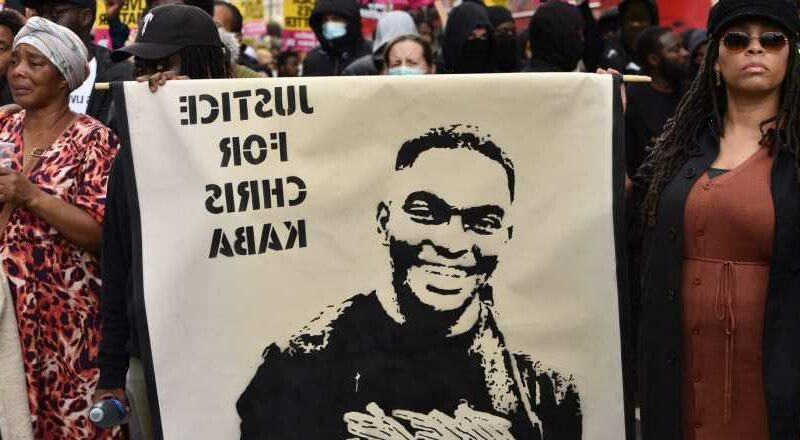 Chris Kaba died on 5 September after being shot by a firearms officer from the Met police. His death has sparked outrage across the UK, as many call for justice. Here is what we know so far.

Updated 13 September: The firearms officer who was involved in the death of 24-year-old Chris Kaba has been suspended from duty, the Metropolitan police have confirmed.

In a statement released yesterday evening (12 September), Amanda Pearson, the force’s assistant commissioner, confirmed the decision had been made following “careful consideration of a number of factors, including the significant impact on public confidence”.

“Our thoughts and sympathies remain with Mr Kaba’s family and friends,” the statement read. “We understand how concerned communities are, particularly Black communities, and thank those who are working closely with our local officers.”

In light of the Independent Office for Police Conduct’s (IOPC) decision to launch a homicide investigation following Kaba’s death, Pearson added: “We are actively supporting the IOPC investigation and would ask those with information that could be useful in establishing what happened to contact the IOPC directly to maintain the independence of their investigation.

“The decision to suspend the officer does not determine the outcome of the IOPC investigation. Firearms officers serve to protect the public and know that on the rare occasions when they discharge their weapons, they will face intense scrutiny. I know this development will have a significant impact on the officer and colleagues.”

Anyone with information that may aid the IOPC’s investigation is being asked to contact the IOPC by phoning 0300 303 0779 or by emailing [email protected], referencing “Streatham Hill”.

As reported 12 September: The death of Chris Kaba has affected the lives of many.

The 24-year-old, who was due to become a father, was fatally shot by a firearms officer from the Metropolitan police shortly before 10pm on 5 September in Kirkstall Gardens, Streatham Hill, London.

His car was hemmed in by two police cars in a residential street before one round was fired from a police weapon.

The Met said Kaba’s car was stopped by a specialist firearms officer following the activation of an automatic number plate recognition camera, which indicated the car had been “linked to a firearms offence in the previous days”.

However, the Independent Office for Police Conduct (IOPC), which has launched a homicide investigation, said that no “non-police issue firearm” had been found following a search of the car and surrounding area.

“We continue to ask that people avoid speculating about this incident out of respect for Mr Kaba’s family and for everyone else affected.”

Kaba’s death has sparked outrage across the country as many demand answers and seek justice.

In a statement released through charity Inquest on Wednesday, Kaba’s family said they are “worried” he would still be alive had he “not been Black”.

The statement read: “We are devastated; we need answers and we need accountability. We are worried that if Chris had not been Black, he would have been arrested on Monday evening and not had his life cut short.”

Deborah Coles, director of Inquest, said: “When the police kill, they must be held accountable to the rule of law. Inquest fully supports the family’s call for this to be a criminal investigation from the outset. It is essential that fatal use of force by police is examined with this high level of scrutiny.

“There is rightly anger and frustration at yet another Black man whose life has been cut short after the use of lethal force by police. Too often we see misinformation and demonisation of those who die. We hope this is not repeated here, as family and friends mourn the loss of a loved one.”

In a statement on Friday, assistant commissioner Amanda Pearson said the Met is “co-operating fully as the IOPC work to independently establish the full circumstances surrounding the shooting”.

On Saturday, thousands took to the streets of London to call for justice, with crowds gathering outside the Met police headquarters at Scotland Yard.

Speakers at the protests included Diane Abbott and Stormzy, who encouraged everyone to “have stamina”.

“Chris has a mother, he has a family, he has brothers, he has friends, people who knew him in real life, who for them, it’s unbearable,” he said.

“What they’ve done is they’ve killed someone. We can’t sugarcoat it.”

On Sunday Bell Ribeiro-Addy, the MP for Streatham, where the shooting took place, said: “This is a matter which could not be more serious.A young man has lost his life and our sympathies are with his parents and his family.It is incomprehensible that the officer who killed Chris Kaba is not suspended. The family, the local community and we as MPs want to see a swift response in recognition of the utmost seriousness of this.

“Chris’ death was on Monday, it is now Sunday and the officer has yet to be suspended.

“We are calling on the Met to suspend the officer today.Even moving him out of firearms duties or into back-room duties would not be sufficient in view of the seriousness of this matter.It must be suspension and it must be now.”

Dawn Butler, the MP for Brent Central, also condemned the shooting. She tweeted: “I was at this meeting and I very much supported the call to suspend the officer responsible. The Met is already in special measures and this slow response to something as serious as this is just totally unacceptable. No confidence. No justice. No peace.”

Those looking to support Kaba’s family can donate to the GoFundMe page set up by Jefferson Bosela, Chris Kaba’s cousin and the official representative of the Kaba family.

“On the 5th September, Chris Kaba, an unarmed black man, was mercilessly executed by the Met Police,” Bosela writes on the GoFundMe page.

“Since then, the Kaba family have relentlessly campaigned for a homicide investigation to be launched, which they have now achieved. However, this is just the beginning of a long road towards securing a prosecution and a guilty verdict.

“The campaign has been and will continue to be lengthy, costly and traumatic for those involved. Due to this, the target goal will be adjusted accordingly to compensate for this and to support the campaigners in their ongoing endeavour to bring the culprits to justice.

The page adds that the funds raised will contribute towards resources to run the campaign, the costs of organising protests, and fundraising events, and financially supporting the campaigners taking unpaid leave to dedicate themselves to the cause.

The remaining proceeds will go towards the Kaba family.