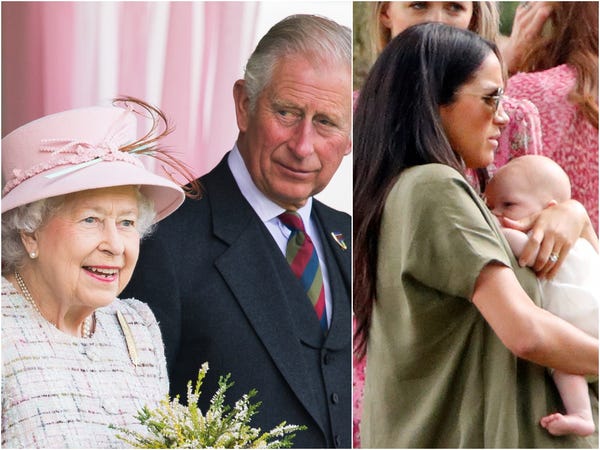 A friend of Prince Charles reportedly said "everyone really misses Archie" and that the royals are upset about missing out on seeing his growth.

Speaking to the Mail Online, the friend, who chose to remain anonymous, said the prince would regularly visit Meghan Markle and Prince Harry at their Windsor home before they relocated to North America last year.

"The Prince of Wales enjoyed popping into Frogmore Cottage to see his youngest grandchild and is sad that he hasn't seen him for so long," they said. "He has missed much of his development since he is now growing up in the USA."

"Other members of the family are very sad at not seeing him. Everyone really misses Archie – they feel it's particularly sad for the Queen and Prince Philip. Harry always said he looked forward to raising his family with William's – which of course is not now happening," the friend added.

Harry and Markle took Archie on a sabbatical to Vancouver Island in Canada for Thanksgiving and Christmas last year. The couple remained there as they transitioned from their previous roles as working royals in January until March, when they moved to California after officially dropping their HRH titles.

The Duke and Duchess of Sussex bought their first home together in Santa Barbara in August.

They have not been able to return to the UK since their farewell tour in March, however, Harry said during a virtual engagement in August that they "would have been back already had it not been for COVID."

They spoke about watching Archie grow during the Time100 talks, which they co-hosted in October.

"For us, we are just trying to embrace all of the quality time we get with our son right now, and to not miss a single moment of his growth and development, which has been really special," Markle said.

Harry added: "As Meghan quite rightly said, you know this is an opportunity to spend more time as a family than we probably would otherwise."

The couple previously said they likely would have missed Archie's first steps if it wasn't for the pandemic.

Clarence House and Buckingham Palace did not immediately respond to Insider's request for comment for this article.