If you’ve tuned into any romantic reality TV shows over the past few years, chances are you’ll be familiar with a concept known as “the test”.

A phrase synonymous with Love Island, “the test” involves seeing how a prospective partner behaves around other people to gauge their trustworthiness and how much they really like you via the age-old belief that actions on a night out with the boys speak louder than sweet nothing words whispered when no one else is around. 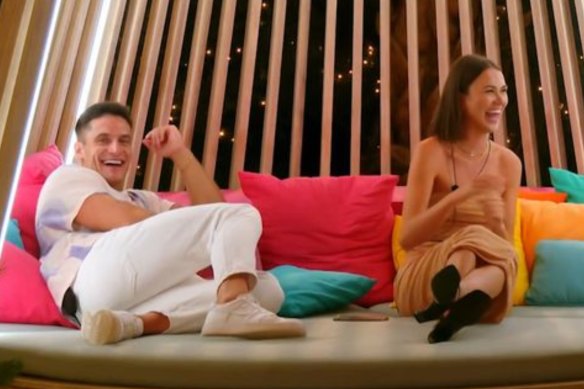 Love Island Australia’s Phoebe: ‘Good guys give me the ick.’Credit:9Now

Far from being just a subplot to create bingeworthy drama, experts say orchestrated tests are prevalent in the real word and can include things like having someone else slide into the DMs of the person you’re with, seeing how they react to you flirting with other people, outright cheating or even faking pregnancy tests.

“Tests are really just an elaborate form of manipulation,” says Rachel Voysey, a principal psychologist with The Relationship Room.

In the world of Love Island which airs on 9Now (Nine is the owner of this masthead), tests most commonly arise when one party of a previously smitten couple decides to get to know a fresh member of the villa, reasoning that flirting with someone new while the person they’re in a couple with is forced to watch on is a great way to “test the connection”. Tests also come in thick and fast during an infamous annual week known as Casa Amour, where the existing men and women are separated from each other and sent to villas with new men and women to meet. The logic being that if a relationship can survive a lads’ holiday or girls’ trip without cheating, the simulated test of fidelity has been a roaring success.

Sure, this behaviour sounds like something from one of the outer circles of hell, but Voysey says it’s a practice she sees all the time in her work, far from the bright lights and Spanish mansions projected on television.

“People make out like the things that happen on these shows are irrelevant, but they’re not. Yes, it’s a high pressure environment so you see the worst of human behaviour more quickly, but it’s still human behaviour and that’s extremely relevant,” Voysey says.

“It’s something we’ve all experienced before at some point. Ten years ago it was giving someone the silent treatment or not writing back to a message, but now with Gen Z it’s escalated to a place where there are “burner” accounts on TikTok dedicated to messaging the person you’re dating to test how they respond,” Luscombe says, adding that the instant gratification of social media and the insecurities that come with likes and follower counts serving as social currency has exacerbated an age-old dating habit that’s been around since time immemorial.

“We see this kind of behaviour a lot in younger people because when you’re young, you often don’t have much experience and don’t know how to communicate your needs and wants effectively,” says Luscombe.

Voysey says it’s also something she sees in the older dating demographic, where people “have lost their ability to feel risk and vulnerability because they just can’t cope with the prospect of another heartbreak.”

Like many forms of less than perfect relationship tactics, tests are more of a reflection on the person setting them than the recipient, says Luscombe. If you’re setting tests due to fears of being cheated on or heartbroken, for example, it’s likely you’re still processing hurt from previous experiences. Other reasons may be that you’re unable to communicate your insecurities or that you simply don’t trust the person you’re with – in which case, Luscombe suggests going with your gut.

“There’s no relationship that goes without tests,” Luscombe says, referring to challenging periods such as a loved one dying, financial troubles or job loss.

The question is are they natural tests that everybody goes through in life or are they orchestrated?

“Natural tests can provide an opportunity for the relationship to be solidified and a couple to come together in healthy ways,” she says.

The other moral dilemma arises when you consider the act of setting someone up to pass or fail a test they’re sitting without knowledge or consent in a bid to calm your discomfort.

“It kind of reflects your overarching ethics,” Voysey says. “Are you OK with playing around with people’s lives to quell your own insecurities? Because even if they pass the test, when they find out you schemed and manipulated they’ll no longer trust you, so it will backfire anyway.”

She adds, “It’s natural that people want to avoid rejection and heartache. In that sense, tests are a way of asking someone the tough questions, which are ‘can I trust you?’ and ‘will you hurt me?’ But there is no quick way to find those things out.”

While tests are, as Voysey says, “a slippery slope that shatters trust and almost never goes well” it is a pattern that can be unlearned over time by figuring out the root of the problem and learning how to vocalise what you’re feeling.

“A healthy test is being vulnerable and communicating your needs to someone and seeing if they can respect those. It’s about working on yourself, building resilience and asking yourself what you’re scared of.”

For people on the receiving end of tests, Luscombe says the best thing to do is vocalise what’s going on and what you’re experiencing before it’s too late.

“Telling someone you’re aware you’re being tested is really powerful. Then you can have a conversation about it instead of being tested.”

She adds, “It might be uncomfortable, but it’s so much easier to have a conversation before something happens and you’re far more likely to have a better result.”