‘The Wilds’ is Amazon’s new sensation. HL spoke EXCLUSIVELY with Reign Edwards about that episode 2 twist, Rachel’s incredible but complicated bond with her twin sister Nora, and more. Spoilers ahead!

Being stuck on a deserted island is hard, but being a teenage girl is harder. Amazon Prime Video’s young adult series The Wilds has captivated fans as it explores the complex lives of 8 teenage girls stranded on an island. Rachel and Nora are twin sisters stuck on the island together, and their backstory reveals a powerful love and connection that’s unparalleled. But this is The Wilds. Things are complicated.

HollywoodLife talked EXCLUSIVELY with Reign Edwards about taking on the role of Rachel. She loved how the relationship between the twin sisters took center stage in the series and weighed in on Nora being a secret operative giving intel to Rachel Griffiths’ character, Gretchen, who put these girls there in the first place. Reign also opened up about her process to play a character with an eating disorder. Plus, Reign revealed what she’d like to see in a potential season 2. Read our Q&A below. 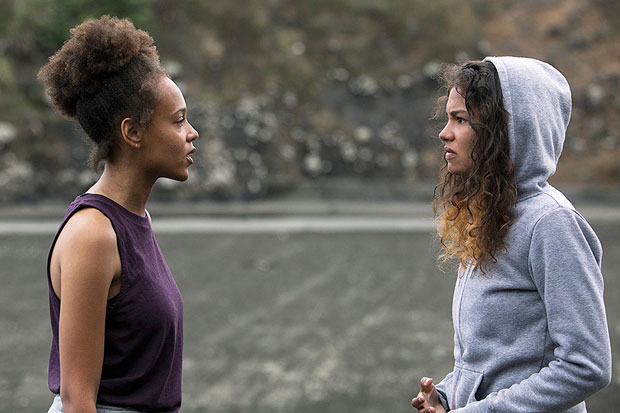 What was it about Rachel that stood out to you and drew you in?
Reign Edwards: When I auditioned for it, I didn’t know the depth of her story because we actually shot the pilot in 2018 and came back in 2019 to do the series. During that time, it kind of developed into what she is now, which is super beautiful and complex. But what drew me to her was, in the audition, the focus was on the sisterhood, as well as her athleticism. But for me, it was the first character I played where the love story that the character has isn’t a romantic one. It’s between sisters. It’s siblinghood. I thought that it was such an awesome opportunity to showcase the struggles and love between sisters. These are fraternal twins who couldn’t be further apart. I just thought it was such interesting storytelling and really exciting.

For Rachel, one of the biggest shocks was that her hand was missing in the second episode. In the finale, we find out she was bitten by a shark. There’s also the fact that Nora’s been an operative, and Leah discovers the Twilight of Adam. There are literally so many unanswered questions. For you, what do you most want to be answered?
Reign Edwards: Everything! For my character, I’m interested to see her journey and not being with Nora. Nobody knows what’s going on with Nora, and I want to see how she handles that. Even though she’s in a state of peacefulness and understanding, I’d like to see how she handles life without Nora, for whatever time period that is, because we don’t know how long it is until she’s reunited with Nora and all that.

We also don’t know Nora’s fate because we don’t see her after they’re rescued from the island. I found it very interesting during Rachel’s interrogation how she spoke about Nora. We don’t know what happened to Nora.
Reign Edwards: You don’t know, and that’s what I think is so intriguing. Because she could be dead, she could not be dead. Rachel’s in a state of she doesn’t know if Nora’s alive or dead. But I think she’s gotten to a point where she understood why she did what she did, understanding why her sister has always been the way she is towards her. Because of that understanding, I think she has a hope to be reunited with her sister, but she really doesn’t know. I think that’s going to be interesting to see play out whether Nora is there or whether she’s not. Whether or not Nora is there, we don’t know, and Rachel doesn’t know. So I wonder how long that peaceful state will last.

Rachel may now know that her sister was an operative on the island. Do you think Rachel could forgive her sister for pulling her into this situation and thus setting off a chain of events that led her to losing her hand?
Reign Edwards: I don’t know if Rachel knows if Nora’s the operative. I think she understands why Nora has been the way she is her whole life, with how she’s treated Rachel in terms of her diving journey and seeing how unhealthy it was for her. But if Rachel finds out, I think it’s this conflict of being like, what the f**k? Why’d you do that? Why are we in this situation? But also understanding that she [Rachel] was off the rails. I think eventually, Rachel could forgive Nora if she were to find out that Nora was the operative. I do think that, eventually, she could forgive her. 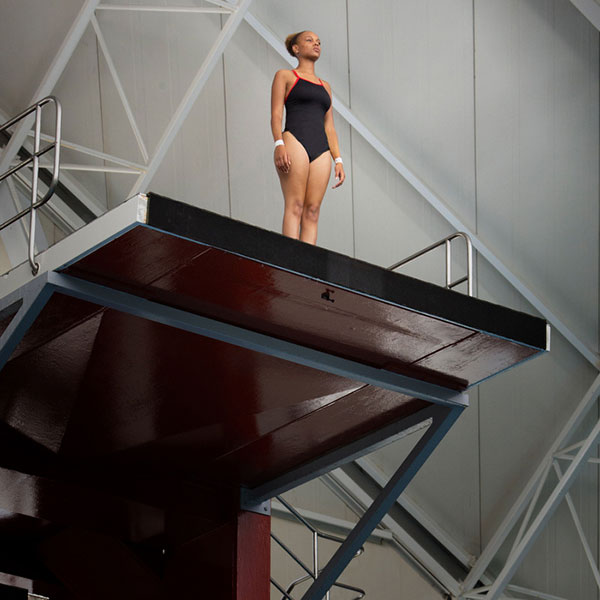 In the second episode, we get an inside glimpse at Rachel’s struggles, especially with an eating disorder. How did you prepare for that storyline?
Reign Edwards: A good friend of mine named Karla Mosley actually struggled with an eating disorder as well, so I spoke with her. And, really, Rachel is a part of her. I took everything that she spoke with me about and applied it to Rachel. Honestly, Rachel’s dedicated to her because it’s such an important thing to talk about, especially within the Black community. So I made sure that I included her in everything I spoke to her about, even just down to the way that Rachel views herself in the mirror, and the kind of calculator that goes on in your head when you have an eating disorder, and the constant pattern of thoughts that goes on. Karla Mosley was just a big, big help for me in that realm. I also went to YouTube and looked at other people talking about their eating disorder and what it’s like. It’s really a mental disorder that takes physical form. When you’re binging on food, it’s a comfort thing, and then purging is like a punishment for doing that to yourself. I definitely had multiple conversations with Karla Mosley throughout production and throughout filming. She goes on this journey with Rachel to give insight on what that journey of “recovery” is like because it’s never fully gone when it comes to eating disorders. It’s just something where you learn to use your tools to help you.

Another aspect of Rachel’s life was her diving career. Were you a diver at all prior to this role?
Reign Edwards: Honestly, it wasn’t until this project that I’d ever dived in the water. I always jumped in. No one ever just showed me how to dive in the water before this project. So that was a trip. I was really up at the top of the board. All those scenes where you see me at the 10 meter platform, I was really up there. As far as diving starting from 10 meters, that was not me.

I’m 28 years old and can’t dive. When Rachel hit her head while diving, it gave me goosebumps. I literally gasped.
Reign Edwards: I think that’s what I’m so happy about with my episode. The series doesn’t shy away from things. What I really love about my episode is that there wasn’t any filter for Rachel. They really show the reality of what an eating disorder can do to somebody. She could have died. That’s how intense it is. Honestly, I was shocked because originally in the script it was written where you didn’t see the dive. You didn’t see her hit her head, you just heard it. I was so happy that they actually put it in there because it’s breathtaking. It helps people see the painful reality of a lot of people, and not necessarily just hurting yourself on the diving board. It gets that bad for some people where something that they’ve been so good at for so long becomes damaged because they haven’t gotten help that they need with this illness that they have. 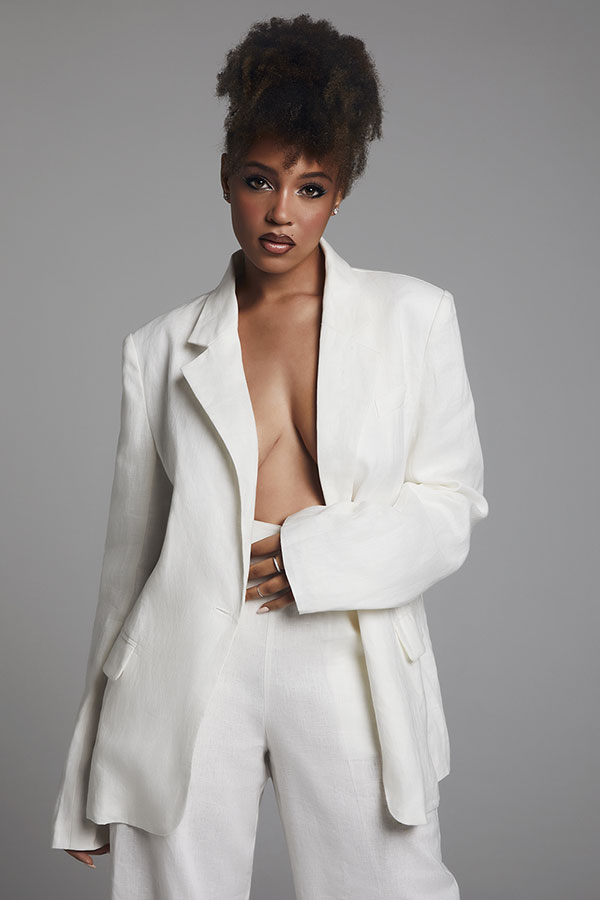 One of my favorite moments of the whole season is at the end of your episode when you’re talking about Nora and how you can always feel her hand. It was a really beautiful and sad monologue. Walk me through what that was like approaching that scene just because it spoke such volumes about the bond that they have and what could potentially have happened to them. I didn’t feel like it was just about her hand.
Reign Edwards: So I have sisters and I think that’s why I was so in love with that aspect of Rachel’s story. I remember the whole time I was shooting it with Helena [Howard], I would just be so excited. Even talking about it now makes me a bit emotional because it’s such a strong bond. That sisterhood and just siblinghood is such a strong thing. The power of family is so important, and I just love being able to portray that. I was in New Zealand without my family, so there were so many moments where I was working with Helena where it really reminded me of me and my sisters. I just think that there are not enough stories out there that talk about that.

In the last seconds of the finale, Leah discovers the Twilight of Adam, a group of young men going through what Rachel and the girls went through. This leaves things wide open for season 2. Is there anything you would want to explore with Rachel that you didn’t get to in the first season?
Reign Edwards: That’s a really good question. Well, number one, I think it’s already going to be a challenge doing things with one hand now. That’ll be very interesting to go about and how she actually has coped with that. A big struggle that you see with her is her body image and how she’s perceived. I think it would be interesting to go into that next layer of dealing with something else that she can’t control and how she now deals with it from this new mindset perspective. In Rachel’s interrogation, she’s at peace with not being in control, but when those feelings of not being in control ramp up again, how does she handle it from this new perspective? Does she go back to her old ways? Or does she find this new way of moving forward? How does that actually impact her life? How does she see herself differently? I’d love to explore more of how she got to that place of seeing herself differently. We see it throughout the island, but I’d love to see how she handles it now that they’re in this dormitory.