Home » Lifestyle » ‘There are no answers’: Toni Collette brings a murder victim to life in The Staircase

On December 9, 2001, Kathleen Peterson died after falling down a staircase in her home in Durham, North Carolina. Her husband Michael claimed he had been outside at 2.40am and had returned to the house to find her body at the foot of the stairs. A jury disagreed, and in 2003 Peterson was convicted of his wife’s murder.

As the story unfolded, the French documentary series The Staircase, from filmmaker Jean-Xavier de Lestrade, tracked the case’s every detail, including Peterson’s appeal. In 2017, Peterson was re-sentenced to time already served and became a free man. 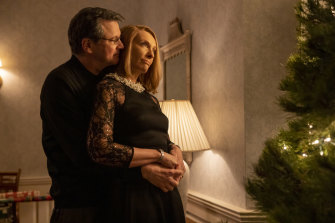 Colin Firth as Michael Peterson and Toni Collette as Kathleen Peterson in The Staircase.Credit:HBO Max

Standing on the sidelines was the New York-born film director and screenwriter Antonio Campos. The result of his obsession with the case is the miniseries The Staircase, which stars Toni Collette as Kathleen Peterson and Colin Firth as the man charged with her murder, her husband Michael.

The miniseries represents a different – and critical – way into the story than the documentary, Collette says. “The documentary is quite presentational, everyone knows they’re on camera and this is a bit more fly-on-the-wall and a bit more of a realistic, even though it’s part fiction,” she says. “It’s more of a realistic, balanced view of what may or may not have happened.”

She found the story inherently fascinating. “Antonio Campos and his brilliant mind and passion knew that. At first, you think, well, the documentary did so well why would you bother to dramatise it? But Antonio has created something so beautiful, and it’s singular. That was very much in the scripts and that’s why I wanted to be involved.”

Having watched the finished miniseries now, Collette says she was “even more blown away because he has elevated it. [He has] created something even bigger and more fleshed out and compelling and complex than the documentary.

“This is an incredibly tragic story, and he’s really managed to capture something very truthful, even if there are no answers. The questions themselves are kind of beautifully complex and honest. It’s very moving and some of that’s very funny. It’s moving in all directions. Obviously, we know that it’s tragic and upsetting, but some of it is just so clever and funny as well and poetic, he’s just made it so beautiful and real and whole.”

Delving into Peterson’s life, Collette says she was compelled by what she found. “She was a passionate woman, and she lived a big life, and she was a great leader at work; she was highly responsible at work in a top position,” she says. “But it started to kind of fall apart and everything she worked for became very unstable. And she became very vulnerable.

“She was on a cycle of just constantly going, she was burnt out and hugely fatigued, and you can’t make decisions when you’re that tired,” Collette adds. “And I really think their relationship was potentially coming to an end. She was not happy. It wasn’t an equal partnership in any way, shape or form. And I think the story holds up because you get to see her as a very, very alive person.” 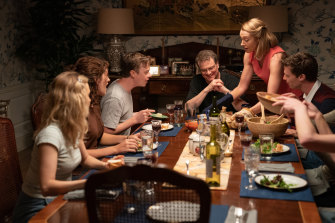 The Peterson family, as imagined in The Staircase.Credit:HBO

Collette felt that Michael Peterson has been “somewhat glorified, within their family, and certainly in the documentary.” In contrast, she says, Kathleen “was objectified and nothing more than really a victim. So, I think that this particular version of the story, it is much more balanced in terms of its perspective. And it is just as much about the breakdown of their marriage as it is what happens after her death.”

The Australian actress elected not to step too far outside the script itself, which was written by Antonio Campos, Maggie Cohn, Emily Kaczmarek and Craig Shilowich. “I had seen the documentary and the scripts were just so informed,” she says. “There were a couple of offers to talk to different people, but I don’t think that was ever going to help me. The writing was amazing, and we had those words to drawn from.”

Collette says she felt somewhat greater freedom than her co-stars “because everybody else is still very much alive and my character wasn’t”. “Also, I think for me in the context of the stories that I’ve told in the past, it was nice not to be the one grieving; everybody else went through that and I got to play with Kathleen very much alive.”

“What we do learn about her is just how stressed she was before she died and the strain that was on their relationship and the imbalance of their relationship. But I did not, as an actor, have to go through all of that really intense grieving, which is exhausting.”

One of the show’s dramatic conceits is that it does not conclusively say how Petersen died. Instead, at different points, it shows a number of potential scenarios. The challenge for Collette was that all three of those scenarios had to be filmed – which means she had die for the camera. And die again. And then die again.

“I thought it was a really great construct,” Collette says. “I think it’s a really wonderful kind of way of being able to look at each of the possibilities. In terms of the physicality of actually falling down the stairs, there are certain places that we have very real knowledge about where she hit and where the blood was, which we had to choreograph so that it matched those specific places.”

In true Hollywood style, not all the tumbles were Collette’s own. “I had a magnificent stunt woman who did the major part of the fall, and then I struggled with the rest of the clawing around and trying to come to and trying to get up and call for help,” she says. “And some of it was shot at crazy times of the day, which just added a stupid amount of strain to it.”

Collette acknowledges that she is drawn to these kinds of dysfunctional family stories. “It’s inevitable,” she says. “We all come from family, and we are so influenced by family, whether we want to admit it or not. I think that psychologically that just makes stories so juicy. And specifically with The Staircase, it’s a big blended family of different personalities.

“I think it is something I gravitate towards because I think in a way we all inherit wonderful things from our families, or sometimes the opposite, and we become such a hodgepodge of those experiences,” Collette adds. “Some people are wily enough and brave enough to make something more of their lives. And some people are really stuck in what they were born into and can’t escape if they need to.

“I like stories about people who are able to live their own life and follow their own path. People who are ballsy enough to be authentic. There are so many influences [in the world] to just be able to stop and to be able to listen to yourself is so important. In terms of carving out your own experience.“

Collette does not agree that the television miniseries serves as a cautionary tale about the potential inherent biases of the documentary form but she does say it is “less one-sided.”

“If you are in a group of people, and you’re getting your photograph taken, everyone cringes, and you put your smile on. So if you magnify that and think of it, in terms of a documentary, what kind of kernel of truth are you getting?” she says. “I think this, even though it’s part fiction, delves even deeper into the story, and because it isn’t so presentational and Antonio really gets into the characters in a way that you would imagine it would be more real in a documentary, that he brings something potentially even true to it.”

The Staircase airs on May 5 on Binge/Foxtel.