Home » Lifestyle » ‘There was no other option’: rushing towards 9/11’s ground zero to find my husband 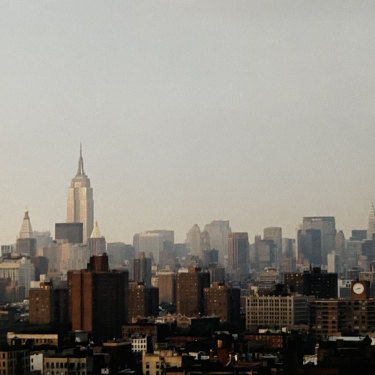 The view uptown from Tegan and Tony’s tiny apartment.Credit:Courtesy of Tegan Sadlier and Tony Clayton

It was 20 years ago. It was a Tuesday and it was hot. I remember I was wearing a white shirt and a white skirt with a picture of a dragon. An outfit I’d never have worn in Sydney, but New York does that to you. It makes you brave.

My husband, Tony, and I had moved there following our July wedding. After four years working in the photography department at Who magazine in Sydney, I’d been offered a two-year contract as its US-based photo editor in the People magazine office, an opportunity I couldn’t refuse. Neither of us had been to New York. We were newlyweds, loved up and excited to be starting a new chapter of our lives in the world’s most vibrant city.

We were renting a not quite legal sublet in a building on the Lower East Side. In the lifts – one of which was programmed to stop at every floor from sunset on Fridays in observance of the Sabbath – we’d eavesdrop on conversations between our eccentric neighbours; we were seriously living in a Seinfeld episode. In a short space of time, we fell in love with Manhattan: its bars and shopping and crazy roller skaters in Central Park. From the only window in our tiny apartment, we had a perfect view of the Empire State Building, with its ever-changing rainbow of night lights. We were living the dream.

At about 8.40am on September 11, I left home for another day at work. As I came around the corner of our building, I noticed what a great view we had of the World Trade Centre, about 2½ kilometres along East Broadway. I stood and gazed at it for a moment, thinking about my mum’s visit in a few weeks’ time and how we’d take her to the rooftop observation deck of the South Tower, 110 floors up. The view was amazing.

I walked down the stairs to my nearby subway stop and took the train. By the time I got off at Rockefeller Centre 20 minutes later, the world had changed forever. It was immediately apparent that something had happened. There was a sense of panic and confusion as commuters darted around me on their phones, trying to catch the news on the TVs in the underground shops.

Feeling rattled, I got into the elevator and headed straight up to my office on the 37th floor.

The Who office comprised a team of four: Karen, an Aussie who’d arrived two years earlier, Charlie and Jeff, two Americans, and me. All of them were in a visible state of shock as they stood around the TV, where I joined them and caught up on the details: at 8.46am, while I was underground, American Airlines flight 11 had flown into the North Tower of the World Trade Centre.

At 9.03am, while I was in the lift, a second plane, United Airlines flight 175, also from Boston, had crashed into the South Tower. It was now just after 9.10am. From our office window, we could see thick brown clouds of smoke billowing up into the blue dome of the sky downtown.

I got in touch with Tony, who was at home in our tiny apartment and was alerted to the disaster by a deep rumble, which he’d feared was a bomb on the subway. It was such a relief to hear his voice, and that he was shaken, but okay. Now, like us, he was paralysed in front of the TV, witnessing a terrifying chronology of events that was hard to digest: another American Airlines flight slamming into the Pentagon in Washington at 9.37am; the collapse of the South Tower just before 10am; followed by another United Airlines flight crashing out of the sky into a Pennsylvanian field at 10.02am. At 10.28am, we watched in horror as the North Tower began its hideous, slow-motion crumple. 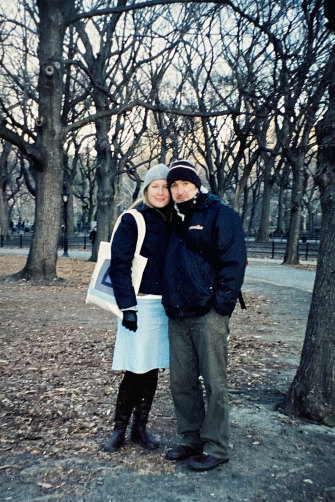 Tegan and her husband, Tony, had been in New York for just a few weeks when 9/11 happened.Credit:Courtesy of Tegan Sadlier and Tony Clayton

It was deadline day at People, but already the team was mobilising to put together a new issue dedicated to the day’s events. My job was to keep my Sydney colleagues looped in on the coverage, but I had a few hours: much of Australia was still asleep, blissfully unaware of the crisis. Until then, there was no way I could concentrate on work. I was sure of only one thing: I needed to be with Tony. We made a plan.

With the city now in lockdown, the subway was shut, so we’d have to walk. I would head six blocks east to First Avenue and walk south as he headed north on the same side. There were five kilometres between us and no mobile reception. At some point, we’d have to meet. There was no other option.

I left the office at about 11am, promising to be back later. Even this far uptown, the streets were busy with people trying to get home, crowds heading on foot towards the bridges. As I started down First Avenue, I passed medical centres where the unscathed were already lining up outside to give blood.

Very few were heading, like me, towards the tragedy: the vast majority were trying to get away from it. They were quiet, haunted-looking and growing in numbers, becoming dustier, filthier, more torn and damaged the further south I walked. Some were on their own, others walking arm in arm, bruised and bloody. I couldn’t imagine what they’d been through, what they’d seen.

They were a distraction I almost had to block out, though, along with the smell of burning plastic and electronics, to focus on my mission: Tony.

By the time we found each other, around the halfway point, we were exhausted. We fell into each other’s arms as if we’d been separated for an eternity and sobbed as the masses, like zombies, continued their melancholy march around us. It was 1pm. 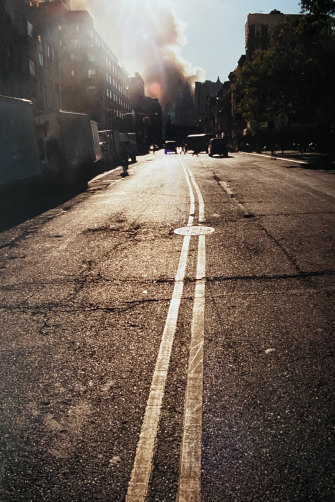 Smoke rises from the World Trade Centre.Credit:Courtesy of Tegan Sadlier and Tony Clayton

We headed back to the safety of our apartment and watched the news: the words “terrorist attacks” were being used, as we sat numb and frightened, trying to process what was happening around us, just down the street. The US was under attack, and it was completely overwhelming.

At 3pm, Tony and I began the long walk back uptown to 49th Street. Sixth Avenue, never less than an iconic picture of New York energy – a pulsating artery of yellow taxis and traffic jams – was eerily deserted, swallowed by an apocalyptic silence. New York was holding her breath. Back in the office, we spent the afternoon and evening on the phone, talking to colleagues, friends and family in Sydney who were waking up to the tragedy. We went through the details of the morning over and over again, as if by repeating the facts we’d somehow accept them. 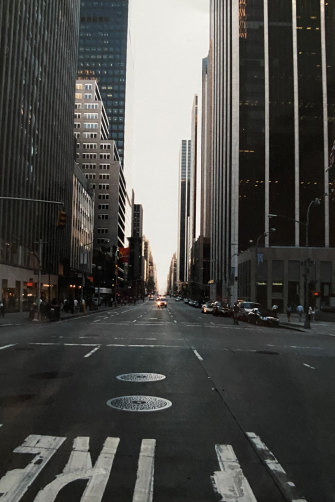 An eerily deserted 6th Avenue on the evening of the attacks.Credit:Courtesy of Tegan Sadlier and Tony Clayton

I did a radio interview with 2GB, where my father was working at the time, but can remember nothing about what I said. The horror of September 11 consumed us for weeks. There were constant reminders in our neighbourhood: the sickly smell of burning plastic and electricals from Ground Zero; the normally bustling streets closed to allow the passage of noisy trucks and the ambulances that never came. Working on the 37th floor of a landmark building now felt perilous. I struggled with having to go there, the expectation that we’d all continue as normal. For a while, Tony, who didn’t yet have a job, came with me: if there was another attack, at least we’d be together.

Every street corner was plastered with posters of the missing. Every fire station became a shrine. Candle-light vigils were an almost nightly occurrence, the city’s sadness palpable. When the first plane since the tragedy flew over Manhattan, everyone looked up. My 30th birthday, just two weeks later, was a sombre affair; a quiet dinner with a few friends, all sharing the same unease. No one was in the mood for celebration.

I struggled with having to go there, the expectation that we’d all continue as normal. For a while, Tony, who didn’t yet have a job, came with me: if there was another attack, at least we’d be together.

Over the next few months, though, New York did what she does best and distracted us from our distress. In October, my mum came to stay as planned. Later, Tony and I took advantage of cheap flights and, nerves jangling, flew to New Orleans. We spent Thanksgiving in Martha’s Vineyard and on Christmas Day we had brunch at the famous Plaza Hotel – and it snowed.

My contract would now finish in March, more than a year early; American companies were cutting funding for international postings. We thought about trying to stay, but it really wasn’t the climate for foreigners to be looking for work. Tony and I had always been adamant we wouldn’t have children but now, somehow, we didn’t feel so invincible any more: our selfish little lives had been humbled. We took it as a sign that we were supposed to go home and maybe think about having a baby. So that’s what we did. 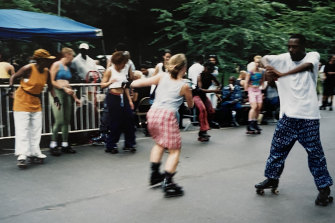 Newlyweds Tegan and Tony had fallen in love with New York, including Central Park’s “crazy” roller skatersCredit:Courtesy of Tegan Sadlier and Tony Clayton

For 20 years, I haven’t been able to watch or read anything about 9/11. Even with the passing of time, the memories filled me with an overwhelming sadness. Nor have I ever felt able to volunteer the information to strangers that I was there: I didn’t feel strong enough to withstand their inevitable questions. But 2021 is a year of personal milestones: our 20th wedding anniversary and my 50th birthday. Between them lies a third, more public commemoration: 9/11. Perhaps two decades of happy personal memories are finally giving me the courage to remember everything about that day, too.

Had 9/11 not happened, we might never have left. But those terrifying hours showed us our fragility, our inconsequentiality.

Today, I won’t turn off the TV. Tony and I will watch all the images with our 17-year-old son, Finbar – he’ll be 18 in three weeks – and tell him our story, how the events of those terrifying few hours shaped our lives and the people we’ve become. Had 9/11 not happened, it’s possible we might never have left. But those terrifying hours showed us our fragility, our inconsequentiality, which prompted us to come home and start a new chapter in our lives, one in which he has had a starring role.

It’s every parent’s wish that their teenager sees them finally as an individual in their own right, as someone who has had their own formative, if scarring experiences. This year, for the first time in his life and mine, I feel ready to answer Finbar’s questions about that life-changing day. All of them.

To read more from Good Weekend magazine, visit our page at The Sydney Morning Herald, The Age and Brisbane Times.

The best of Good Weekend delivered to your inbox every Saturday morning. Sign up here.