With cinemas closed for months and production schedules disrupted around the world, it's been a while since the choice of what movie to see has been so clear. Corpus Christi is that movie. Just go.

It's the story of a troubled young man who pretends to be a priest in an isolated region of Poland. I know: who wants to see such mainstream fare, but bear with me. This one plays out like a western – a stranger comes to town, transforming the moral landscape. It's Shane, with more vodka and fewer horses. It's as Polish as a cabbage roll, yet startlingly universal. 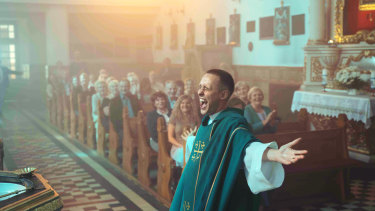 Daniel is able to command instant respect without the bother of years in the seminary.

Polish cinema has long punched above its weight for reasons that are complex and contingent upon history. The quality has waned at times since the liberation from Soviet domination in the late 1980s. There were always great writers, directors and talent, but money for production became scarce. And "freedom" was hard to get used to for artists who had found much of their purpose in opposing state repression.

Jan Komasa was born in 1981, a year after Lech Walesa founded Solidarity in the Lenin Shipyard at Gdansk. Komasa was a child through all the turmoil of the 1980s. He's only 38 now, but his first two features show a concern with both past and present. His 2011 debut feature, The Suicide Room, was about a young man caught up in social media bullying. His second, Warsaw 44, recreated the Polish underground's campaign against the Nazis.

Corpus Christi starts in a reform school, from which Daniel (Bartosz Bielenia) is about to be released. The school appears to be partly run by the Catholic church; Daniel has adapted well to its combination of discipline and prayer. He would like to go to the seminary, he tells the head priest, Father Tomasz (Lukasz Simlat). Instead, he is given a train ticket to a tiny community far to the east, where a man who runs a sawmill is willing to employ under-age cons.

Daniel is an intense young man, with striking eyes. We don't know much about him, except that he went to prison for a violent crime. In the brief period before he arrives in the east, he embraces all available vices – up his nose, down his throat and via his loins. He has a stolen dog-collar in his bag. When the alcoholic parish priest in the sawmill town mistakes him for his replacement, Daniel slips easily into the role. He is able to command instant respect without the bother of years in the seminary.

The film has a milky, washed-out look, which adds to the sense of folktale. Komasa relies heavily on the stillness of the camera and the power of his actors. The close ups of Bielenia, in particular, have immense power, building a sense this this young man might be someone special, an emissary from somewhere. The town has suffered a terrible trauma recently. Daniel sees an opportunity. How easy it is to fool those who believe – but what if he really could help them?

Poland is more than 90 per cent Catholic, sandwiched between German Lutherans in the west and Orthodox believers further east. It's a very Catholic movie in that sense – from the title, to the way the story revolves around the coming of a saviour, to the sense Daniel is also very clearly a sinner. Daniel's body is marked by the violence of his early life, with tattoos and scars he hides from his "flock". As a priest, he must efface that body, but his whole life has been spent defending it against aggression. There's enough here to keep a conference of theologians at work for a year – although I doubt the movie would receive much favour in Catholic halls of power.

When it debuted in Poland, a man claimed it was based on his own story, used without permission. The producers denied this, pointing out there is a long history in Poland of fake priests. That in itself is a telling comment. I guess it makes perfect sense – "prophets" have always appeared where people are disillusioned with their leaders, secular or otherwise.