‘She can record this but can’t secure us a good Brexit deal?’ Viewers are left cringing as Theresa May takes part in a sketch from her Downing Street office to mark This Morning’s 30th anniversary

Theresa May was accused of taking time out of important Brexit negotiations to make a cameo in a comedy sketch to mark the 30th anniversary of This Morning.

The Prime Minister appeared in the short skit on Wednesday morning, to help out host Phillip Schofield who was stuck in traffic en route to the show’s studios – leaving viewers less than impressed.

The sketch saw Phillip take a call from co-host Holly Willoughby panicking that he wouldn’t make it on time for the big day, so she called in help from a host of celebrity friends – including the PM.

Calling from what appeared to be her Downing Street office, Mrs May told Phillip she’d enlisted the help of the Red Devils, as he then promptly sky-dived into the studio.

Viewers quickly took to social media to share their surprise as well as complain that she had more pressing matters to deal with. 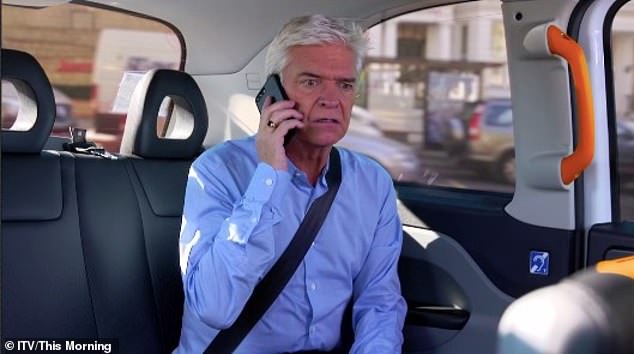 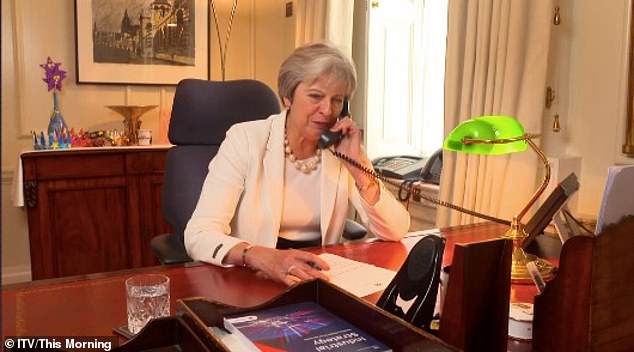 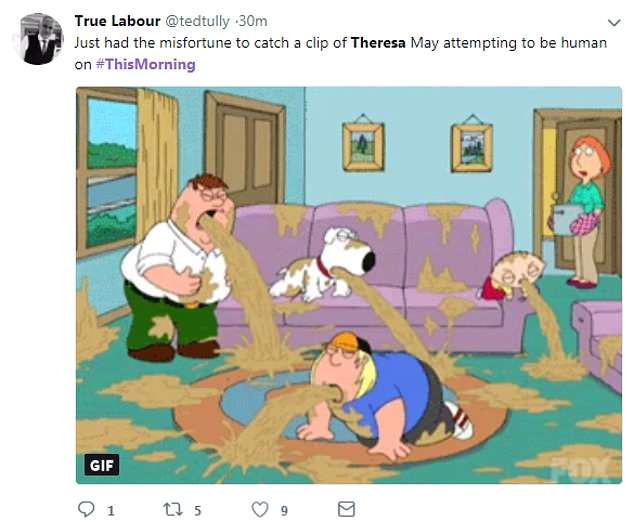 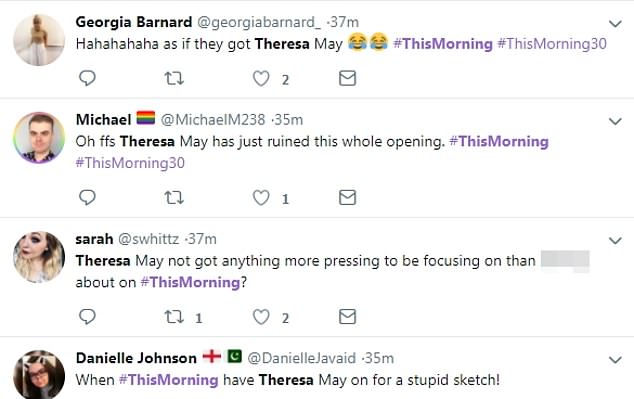 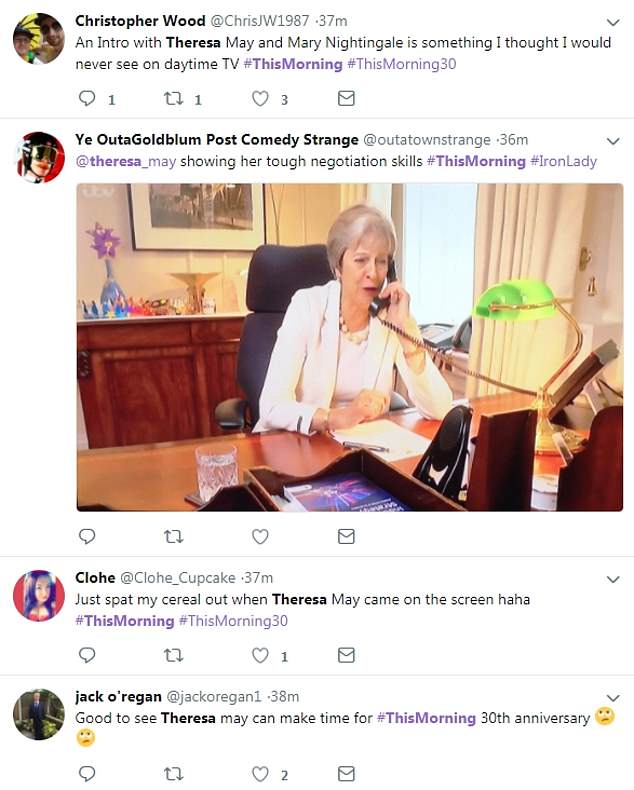 Viewers took to Twitter to share their shock at Theresa May’s involvement in the comedy skit, insisting that she had more important things she should be doing

One viewer took to Twitter to write: ‘Just spat my cereal out when Theresa May came on the screen haha!’

Another joked: ‘Theresa May finds time for her acting debut in sketch to mark 30 years of #ThisMorning.’

‘Theresa May can record some “shanter” for ITV but can’t secure us a good Brexit deal. She’s like the annoying kid in class who thinks she’s hilarious but in reality everyone f****** hates her,’ complained one.

‘Am I bovvered though?’ It isn’t the first time a Prime Minister has tried to win votes with humour: Remember when Tony Blair met sassy teen Lauren Cooper?

Watching the country’s leader gamely chortling behind their desk, as Theresa May did on This Morning today, isn’t a new thing.

Back in March 2009, then PM Tony Blair met the trickiest of work experience candidates in the form of comedian Catherine Tate’s character Lauren Cooper. 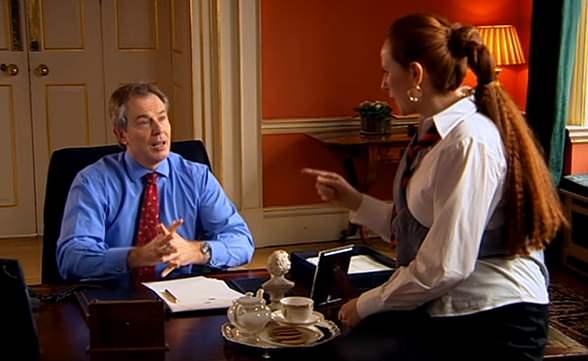 A meeting of minds! Tony Blair meets Lauren Cooper, aka Catherine Tate, in a 2009 sketch for Comic Relief. The attitude-filled teen storms into the former PM’s office with tea, biscuits and a whole lot of questions 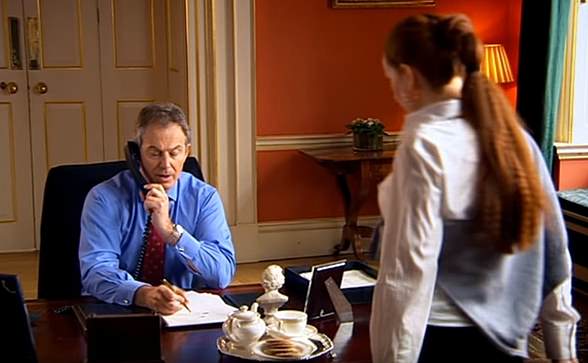 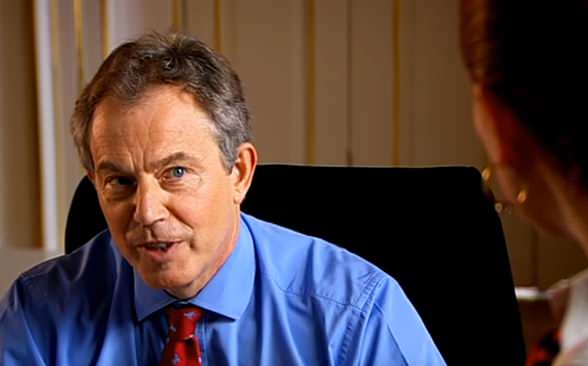 Increasingly stern, Blair is given the character’s key catchphrase, as he tells her ‘Am I bovvered though?’ as she continues her tirade at him 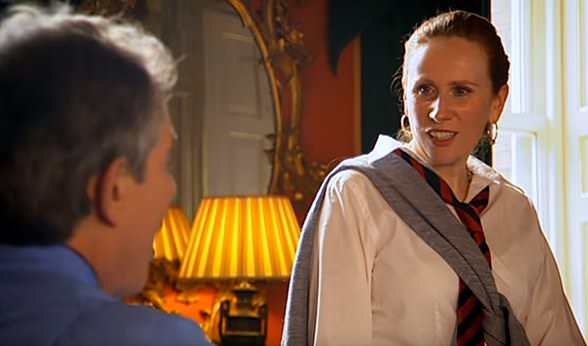 The attitude-filled teen was tasked with handing Blair tea and biscuits…but served it up with a million questions and a large dose of sass.

Interrupting Blair on the phone, she demands to know ‘who’s the most famous person you’ve ever seen?’

How did the Comic Relief sketch end? You guessed it, with a riposte of ‘Am I bovvered though?’ from a stern Prime Minister. Lauren promptly sucks her teeth and heads for the Downing Street door…

While it’s not confirmed the PM was at her own desk in Downing Street, May did seem to be getting some extra help with Brexit negotiations as a text book titled ‘Industry Strategy’ was in full view.

Calling from one of the three phones, May was seen in a smart white suit with chunky pearls, in front of her an important looking document with her pen placed over the top.

In the background adding a personal touch, was a collection of paper crowns and a star sculpture that looked like it had been made by a child. 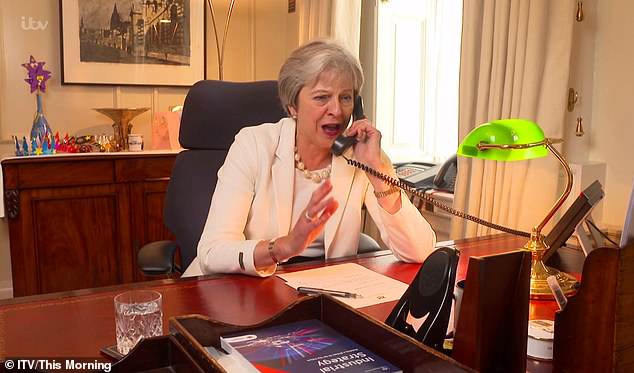 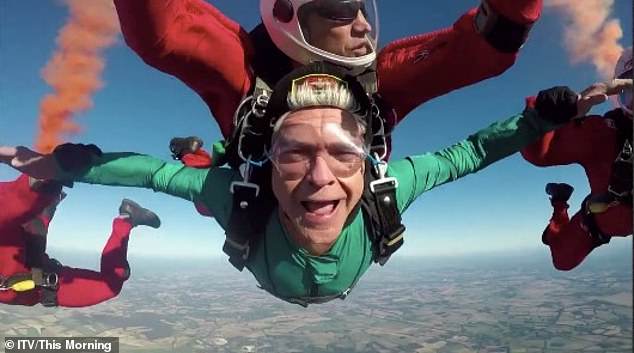 As This Morning began, host Phillip was seen in the back of a cab stuck in a traffic jam trying to get to the studio.

Warning Holly that he might miss the start of the special show, he explain he needed help and warned ‘be quick’. Holly then set about making a few calls.

The This Morning comedy sketch gave viewers some insight into life at Number 10, however contrived, after Theresa May opened the doors to her private office in London’s most famous street.

As the coiffured PM sat at her mahogany writing desk, she held an old-fashioned fountain pen in her hand and appeared to be jotting a personal letter on headed note paper.

Over her left shoulder, a regal-looking sideboard carried remnants of what appears to have been a children’s party, with numbered purple stars sticking out of a colourful blue bottle. Beneath them were a series of cardboard crowns. 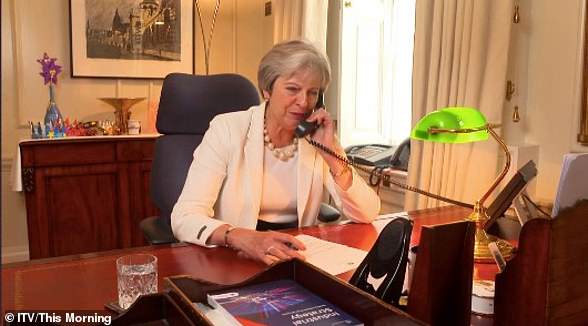 Hotline to Donald? Theresa May appeared on one of her three landline phones in her private Downing Street Office where the This Morning sketch is believed to have been filmed

Communicating with Number 10’s current resident isn’t hard either; May has three desk phones and, one assumes, multiple mobiles. A direct line to Donald Trump, perhaps?

Elsewhere, there’s a grandiose gold vase underneath a stylish painting of a London bridge scene, and a copy of Industry Strategy, an official document of the Tory Party Conference, currently underway at the ICC in Birmingham.

First to learn of a 30th This Morning special potentially without Phillip, Dermot O’Leary said to Holly: ‘What? 30th with no Phillip… not on my watch! I’ll call in some favours.’

Newsreader Mary Nightingale was then seen saying: ‘Don’t worry, I know exactly who to call…’

Doctor Who star Jodie Whittaker was next up, answering Mary’s call before calling Celebrity Juice host Keith Lemon telling him: ‘Phil needs ya…’

With the help of Keith Lemon, Prime Minister Theresa May called Phillip back directly. 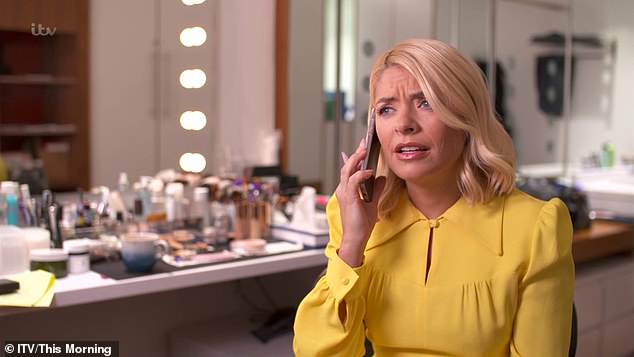 Phillip had called his co-host Holly Willoughby to get help, so she called Dermot O’Leary and then he asked for help from an ITV newsreader before Doctor Who star Jodie Whittaker was enlisted 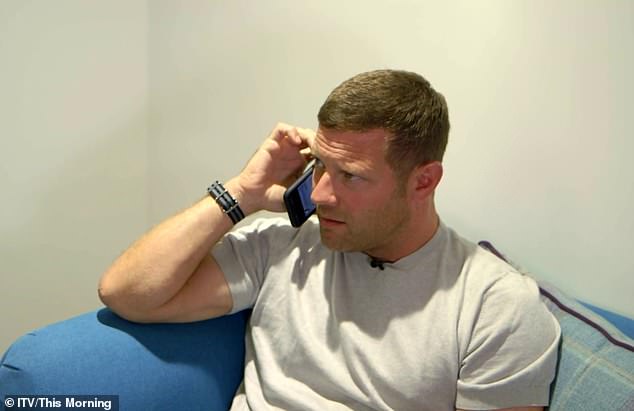 Presenter Dermot O’Leary was drafted in to help and said to Holly: ‘What? 30th with no Phillip… not on my watch! I’ll call in some favours.’ 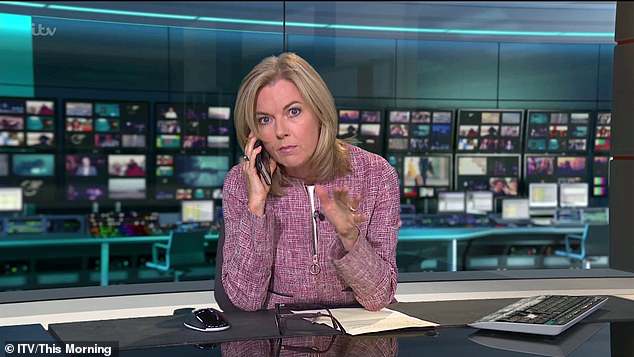 Newsreader Mary Nightingale was then seen saying: ‘Don’t worry, I know exactly who to call…’ 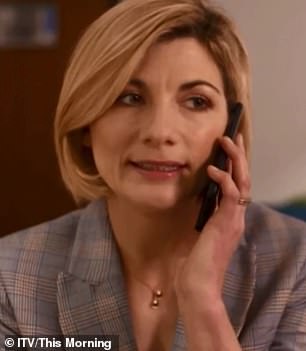 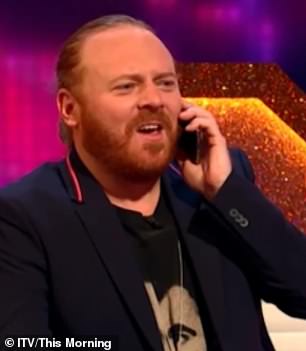 Doctor Who star Jodie Whittaker was next up, answering Mary’s call before calling Celebrity Juice host Keith Lemon telling him: ‘Phil needs ya…’ 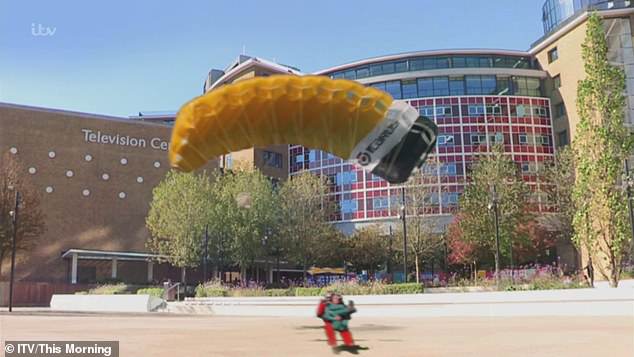 Phillip then appeared to be landing in front of the television centre in White City, London with Holly waiting to greet him and start the show

Theresa said: ‘It’s This Morning’s 30th birthday, you absolutely have to be there… I know just the people who can help you.’

Directing him to a Red Devils sign, the PM signed off saying: ‘Remember Phillip, the nations going to be watching… good luck!’

Joining forces with the Red Devils, Phillip is seen getting on a plane to fly across town before jumping out of the plane and sky diving to arrive at the This Morning studios at Television Centre just in time.

Holly standing outside with her hands in the air, Holly said: ‘What time do you call this?’

Phillip later thanked all involved to help get him to the special show on time, and the 30th party started with a performance from The Bootleg Beatles to reference its Liverpool roots, and then had a special studio audience packed with viewers who’s lives This Morning has saved or changed in some way. 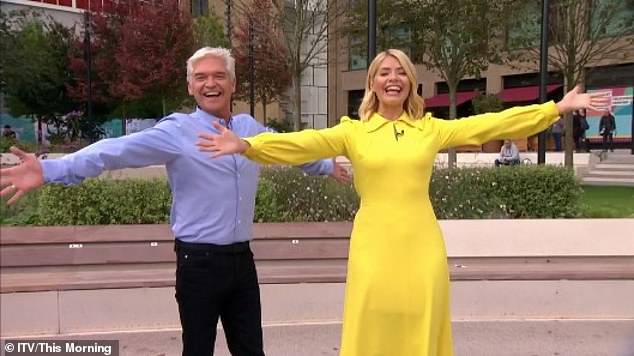 Holly and Phil have been celebrating the 30th anniversary of This Morning, which first aired in 1988 on October 3rd with Richard and Judy, all week