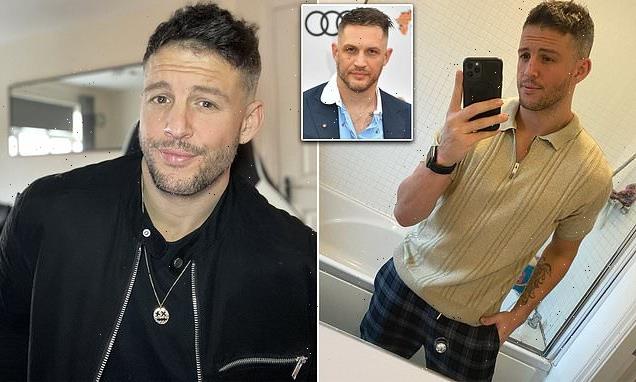 Man, 34, who went viral on TikTok thanks to his VERY striking resemblance to Tom Hardy says he’s inundated with messages from women who offer to fly him across the globe to meet (but he’s still single!)

A man who is constantly mistaken for Tom Hardy claims he receives hundreds of ‘flattering’ messages and even proposals from gushing women every day – but admits he’s still single.

Keify Bankhead, 34, from Newcastle upon Tyne, said that a friend first compared him to the Hollywood heart-throb around seven years ago but since creating TikTok videos he’s been bombarded with comments pointing out his resemblance.

The civil servant claims people have been forced to do a double-take after thinking they’ve stumbled across the real Tom Hardy’s account and he’s been told he could be the star’s stunt double.

He has even been inundated with messages from women who claim he’s their ‘dream man’ – with some even offering to pay for his transport to meet them across the globe. 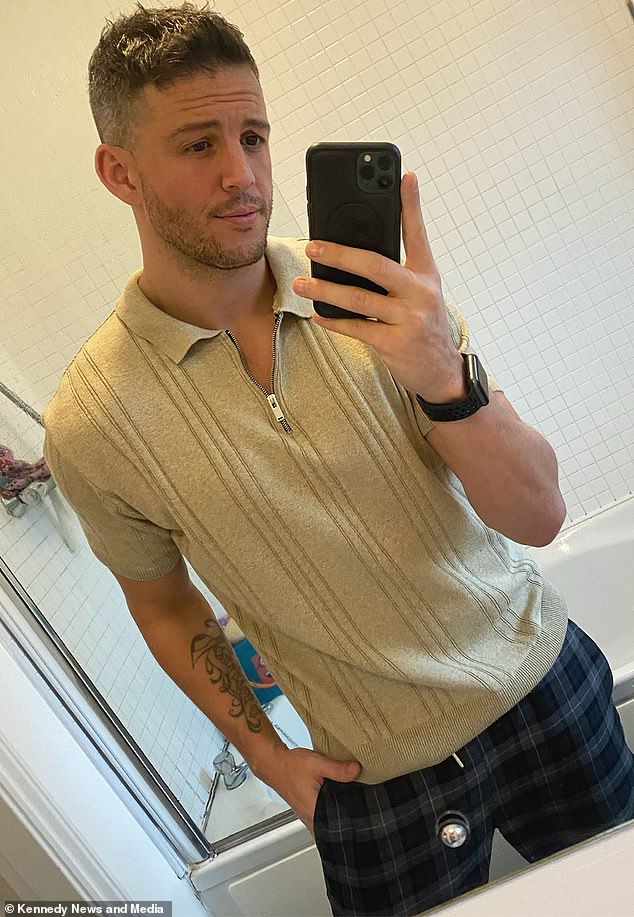 Keify Bankhead, from Newcastle upon Tyne, gets mistaken for Tom Hardy every day on social media 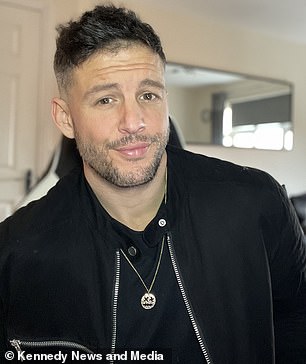 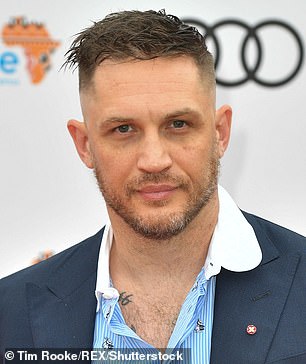 His TikTok videos have been known to gain over 283,700 likes for his resemblance to the film star

Despite never having so much female attention in his life, the modest dad-of-one said he only sees a ‘slight resemblance’ – although admits that the comparison is certainly a ‘confidence boost’.

Keify said: ‘I’ve been inundated with messages about my resemblance to Tom Hardy from women, and men actually.

‘I get hundreds of messages a day from different women [since making TikTok].’

‘My inbox is a little crazy. I’ve had people wanting me to fly around the world saying ‘get a flight to Canada and I’ll marry you’ or ‘I’ll pay for your train tickets to Berlin’ or whatever.’ 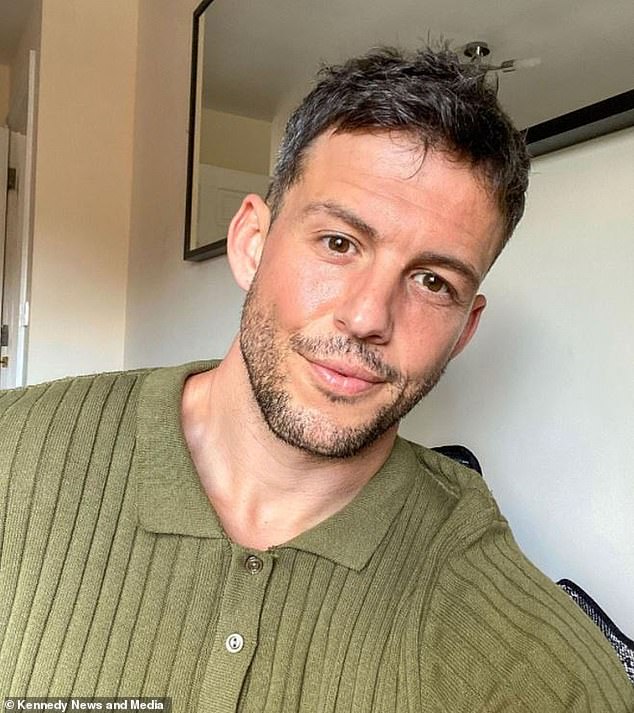 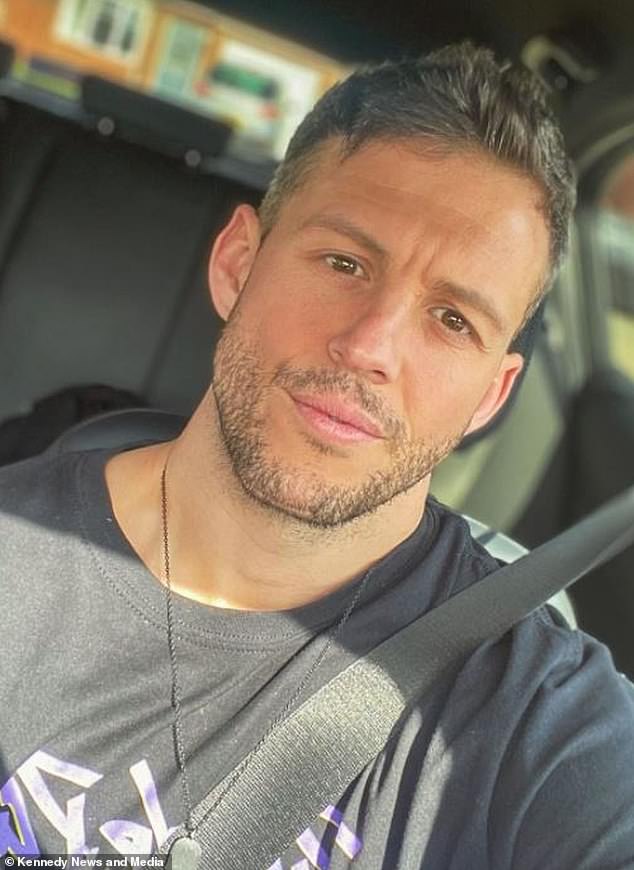 Keify admits that while the majority of people think he is a dead ringer for the star, others will tell him he looks nothing like Tom Hardy

‘Women have said that they want to marry me basically. I’ve never had so much attention in my entire life. One of them said, “How does it feel looking like my dream man?”.

‘Tom Hardy is like my man crush anyway. There’s definitely worse things that could be said about you when someone’s comparing you to someone that looks like that, it’s quite flattering, although not quite believable.’

Keify said that receiving so much attention is ‘very new’ and the comments began when he uploaded his first TikTok video, which wasn’t Tom Hardy related.

Keify said: ‘There’s a pattern emerging, the women tend to be very much on board with it and it’s usually the men or the people without profile pictures, the trolls, that are like “you look nothing like him”. There’s not really many women that say I don’t, which I find quite funny. 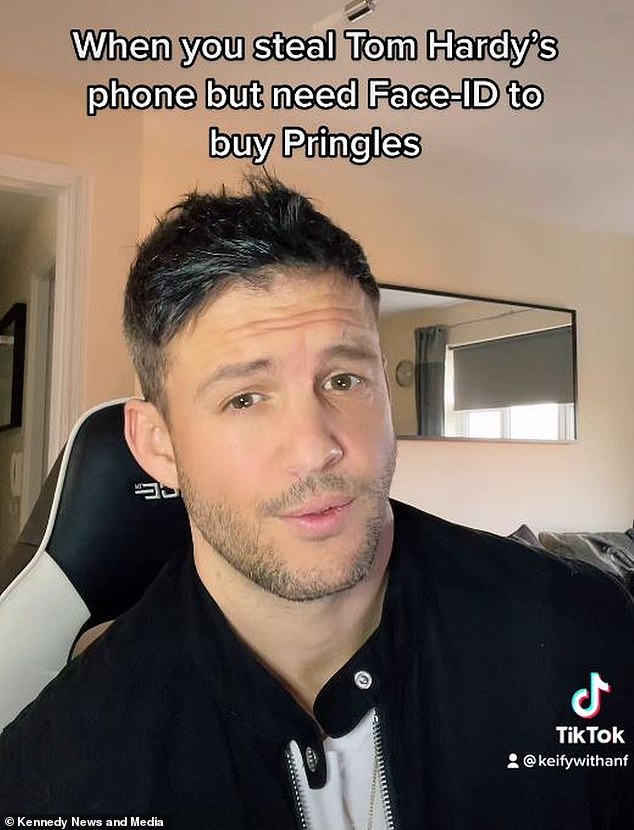 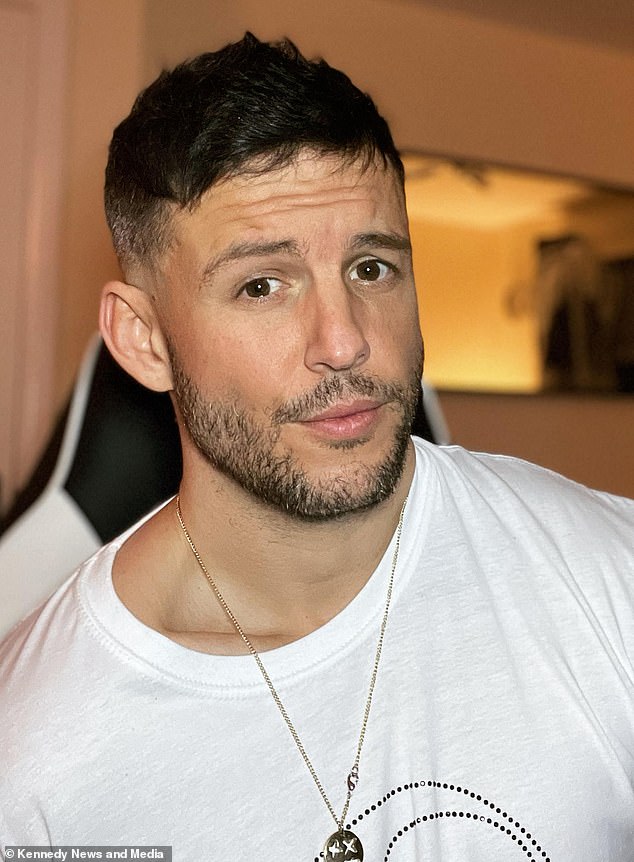 The 34-year-old said he suspects that it’s his browline and forehead which leads people to make the comparison, while others have said it’s his lips that make him look like the Inception star

‘I really did not expect that video to go as viral as it did. I see a slight resemblance but I’m just doing it because of the comments. I genuinely don’t believe that I do look like him, although I’m going with it.

‘It’s made my self esteem higher than it’s ever been to be honest because I’ve had a confidence crisis over the last couple of years.’

‘There was a surprising amount of straight men that had commented saying ‘I’m not even gay but I would’, things like that made me laugh.

‘But then on the other hand people say that I look nothing like him, so it’s 50/50 at this point. Someone said ‘Tom Hardly’ that made me laugh.’ 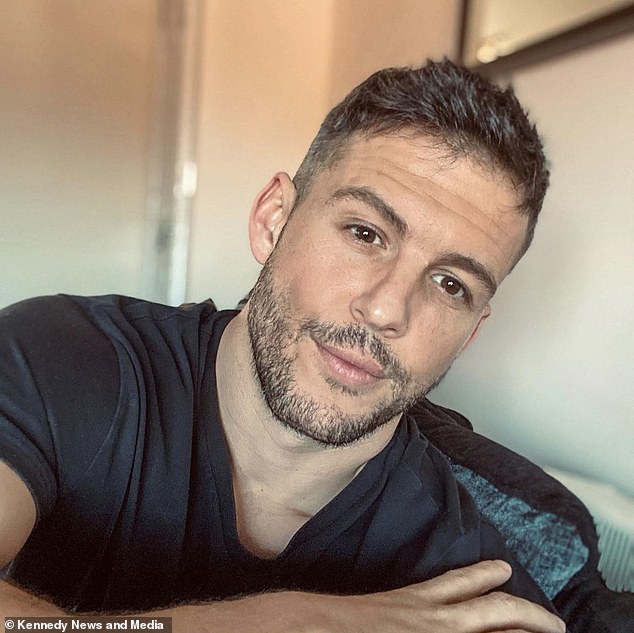 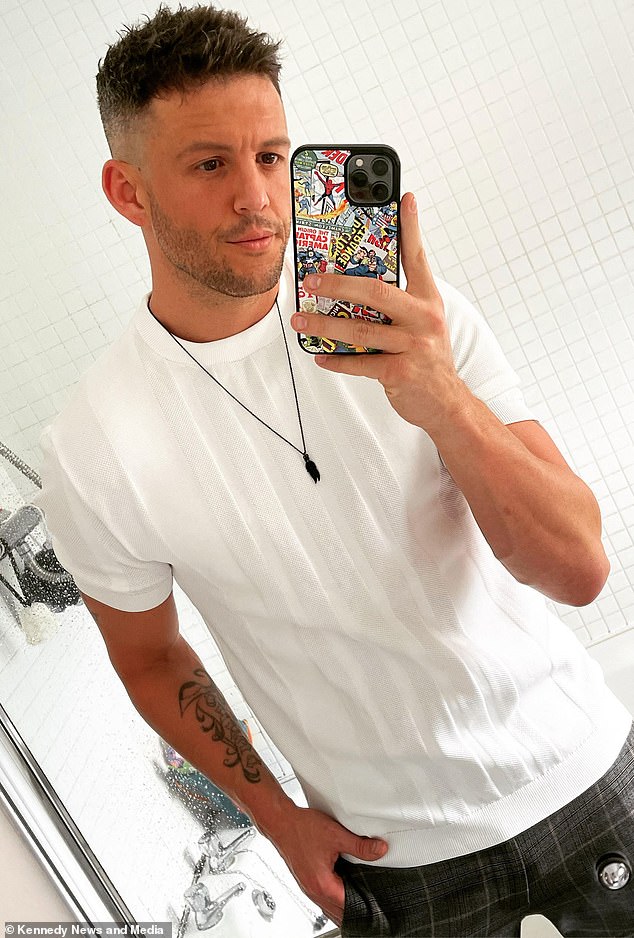 The 34-year-old said he suspects that it’s his browline and forehead which leads people to make the comparison, while others have said it’s his lips that make him look like the Inception star.

Keify said: ‘Years ago one of my friends uploaded a photo saying, “Is it just me or does Keify look like Tom Hardy?”. That kind of was the first time that anybody ever said it.

‘I was speaking to people in person and they were like ‘I didn’t realise, but you definitely do look like him’.

‘On my earlier TikToks I never posted any Tom Hardy ones until after people had said it, so I put one on and everyone was like, “Oh my God, I thought it was Tom for a second” or “I had to take a second glance and check this wasn’t his private account”. 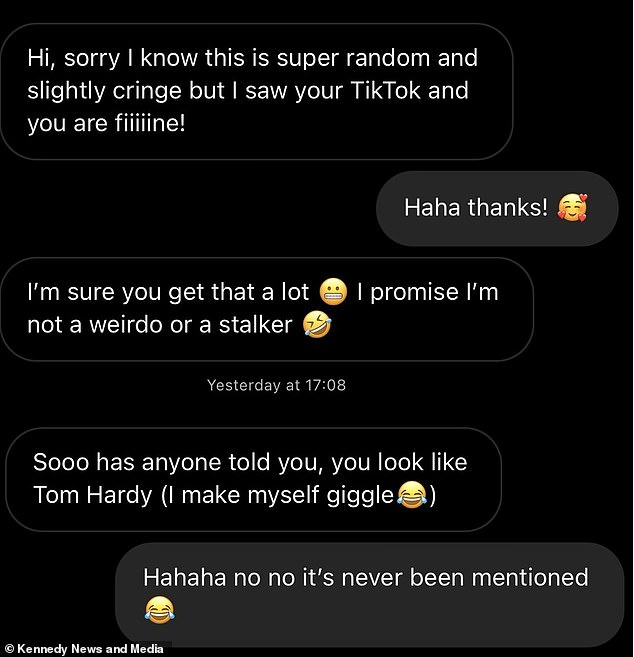 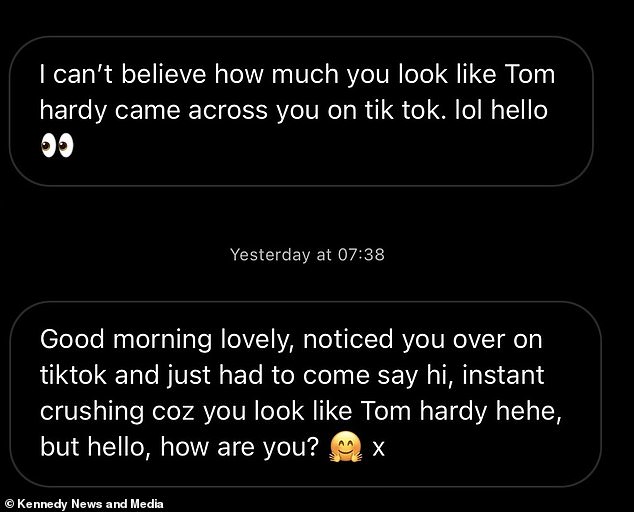 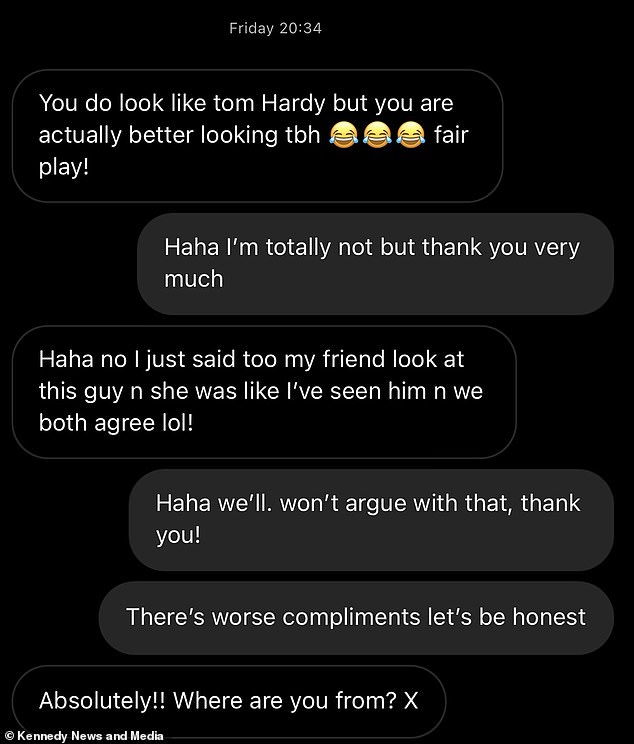 ‘Or “I didn’t know Tom Hardy had TikTok”, “Oh my God there’s two of them?”, “Are you his brother?” and “You look like a younger Tom Hardy” – pretty much that over and over again.’

‘People say I should get a job being his stunt double and that I look exactly like him. They’ve also asked if we’ve got the same parents or ask how I can be 34 if Tom Hardy’s my dad.’

The doting dad said he’s received an ‘overwhelming’ response to his videos – with one amassing more than 283,700 likes, comments and shares.

Daniellehalliday5 commented: ‘To think we were lucky enough to be blessed with one Tom Hardy, when we actually have two.’

Penny Brewster remarked: ‘There’s a picture of him you look identical to.’ 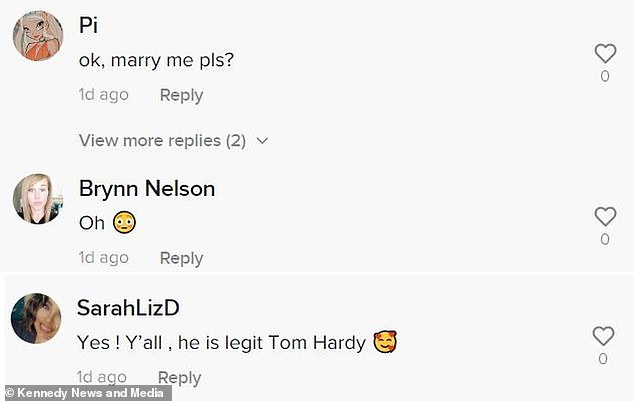 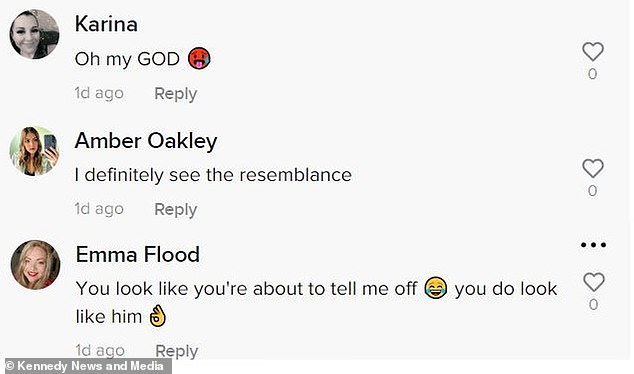 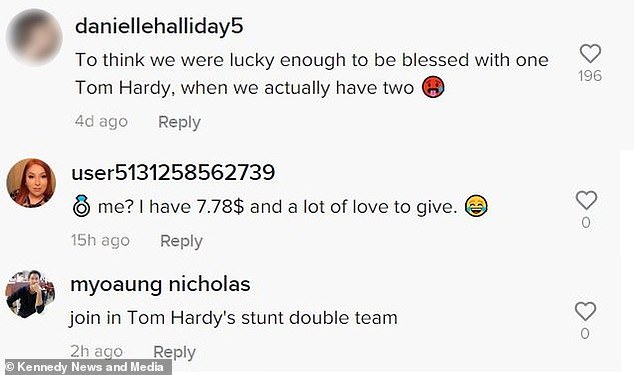 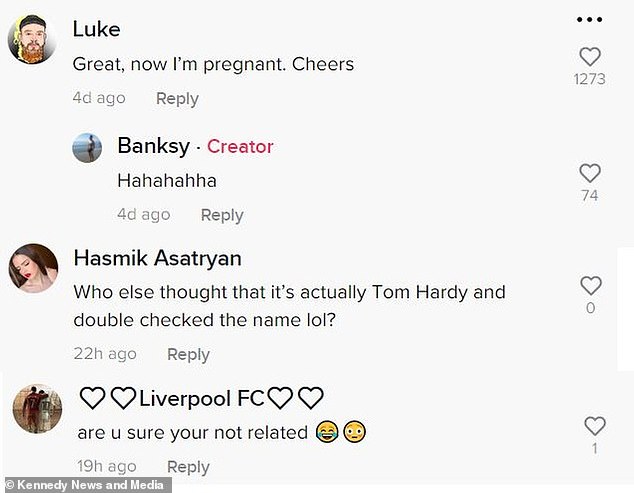 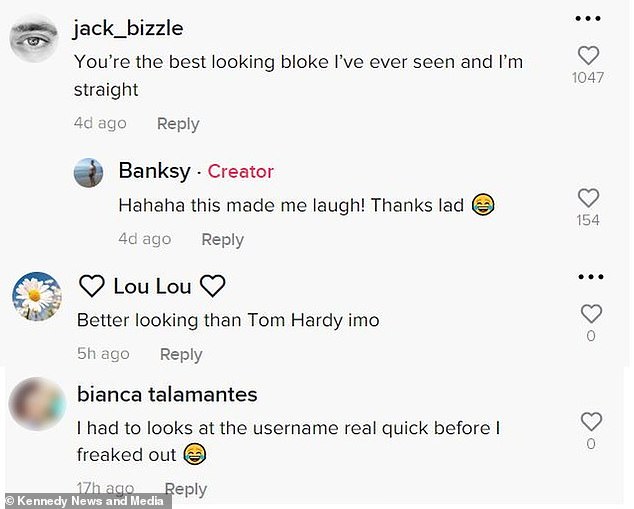