Topshop continues to cash in on the success of its cult favourite polka dot dress by re-releasing the frock in a fifth must-have pattern.

The high street giant this week unveiled a trendy zebra print version of their sell-out white and black polka dot dress, which sold out when it first hit stores in January – and once again when it was restocked in May.

It has since been released in three more coveted prints – an inverse black and white polka dot, a cobalt blue stripe and a vibrant 80s floral version.

However it is this latest iteration of the flirty frock that has fashion experts talking, with the trend-setters at Who What Wear declaring it ‘their favourite to date’.

Summer must-have: Topshop unveiled a trendy zebra print version (far left) of their sell-out white and black polka dot dress (right), which sold out when it first hit stores in January – and once again when it was restocked in May. Fashion insiders are hailing it the best yet

In an article today, writer Joy Montgomery noted: ‘Topshop’s cult buy has just joined forces with this season’s animal-print trend to create the mother of all dresses.

‘Giving a little more oomph than the polka-dot original, we love the dress’s bold brown-and-black interpretation on the usually monochrome animal print.’

She pointed out the piece would make the perfect wedding guest outfit – and is just as suitable layered over a white t-shirt for an off-duty look.

The £55 Zebra Print Pinafore Dress features a flattering plunging neckline and ruffle detailing that cascades from below the bust.

Cashing in: The high street giant has since been released in more coveted prints – including an inverse black and white polka dot (left), a cobalt blue stripe (right), both unveiled in June 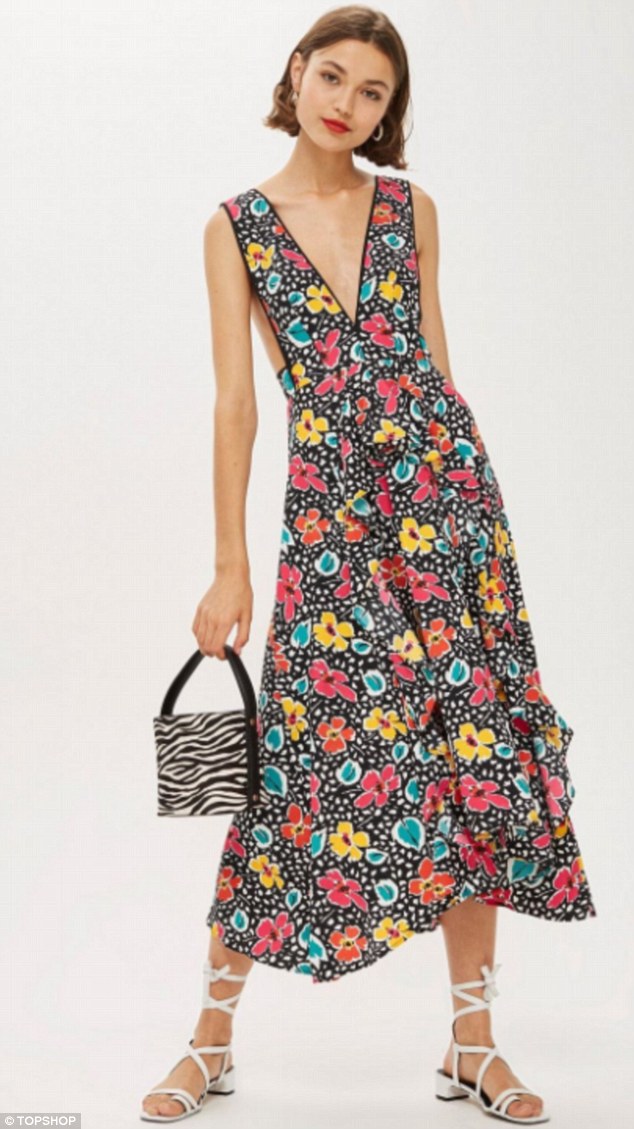 Floral fancy: This playful version of the hit frock was unveiled by Topshop in July

However the equally deep-V back means the wearer doesn’t have much scope for underwear.

Styling tips on the Topshop website suggest: ‘Go for an exotic look this summer with our on-trend zebra print pinafore dress in sand.

‘We’re styling it with heeled sandals for a chic look that works for holidays, evenings out and more.’

Animal magic: The flattering zebra dress can be styled with sandals, pictured, for day or night 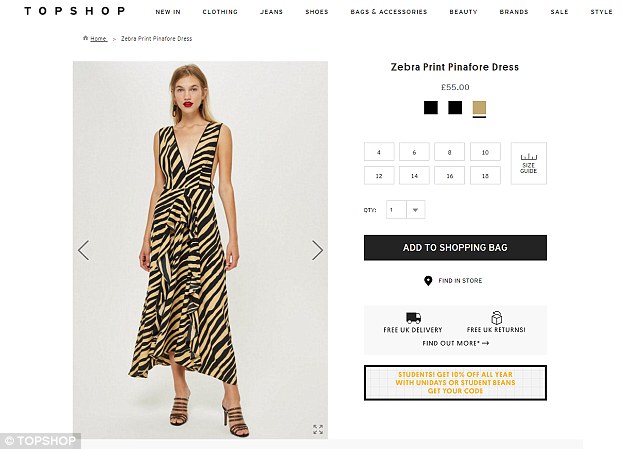 In June the brand released two more designs, the black with white polka dots and the £59 Jacquard Stripe Pinafore Dress in cobalt blue – which was nearly £10 more expensive than the original.

Last month the floral print arrived in stores, although to less fanfare than the previous three. All four are still available online.

This is not the first item to cause a stir among Topshop customers with the high-street store seeing a similar reaction to a striped dress last month.

The retailer saw yellow and white striped sundress sell out in every size both in store and online as customers scramble to get their hands on the trending product.

The polyester dress features a plunging neckline and a wrap style waistline giving it an ultra flattering fit.

Red mittens and Mukmuk: The unlikely success behind the 2010 Winter Olympics’ bestsellers
Travel