The film opens with Donna, heading into court for a final appeal of her sentence, unable to follow her lawyer’s advice to not smile as she catches sight of her family. It comes full circle as Donna’s execution by lethal injection ends the film, with the movie also featuring many other emotionally harrowing moments along the way.

Guards take pity on Wendy, for instance, after she realizes her family isn’t coming to see her a final time. They allow her to play cards with a fellow death-row inmate, who tells Wendy, "I’ll see you real soon." Winter’s Bone‘s Dale Dickey, meanwhile, plays a nun having a crisis of faith after a stay of execution is denied to Ruth, the prisoner she’s counseling. Dorothy takes a Wizard-of-Oz-tinged final bus ride to a prison with an execution facility, with excruciating small talk from a former classmate-turned-prison guard.

In a particularly haunting segment, Helen gets a visit from the son she gave birth to in prison (played by Moonlight‘s Ashton Sanders), now 18 years old and angrily confronting her. He needs to know why she committed her crime, and whether he’s destined to follow in her footsteps. The images they have of each other — an idealized son, a cruel mother — slowly break down as they genuinely come to know each other in the short time they have.

These humanizing portraits portray the pain and emotional toll state-sanctioned murder takes on not only the prisoners, but their families, the victims’ families, and the guards and employees surrounding them. In an interview with Women and Hollywood, director Ben Asher says she was drawn to the story because "almost 90 percent of women in prisons are victims of harsh abuse and violence. Women are the highest growing population in prisons in the U.S." Additionally, 60 percent of women are imprisoned for nonviolent drug charges, and 80 percent of girls in juvenile centers have a mental illness, compared to 20 percent of the general population outside centers. The system fails these women at every age and level, acting punitively instead of seeking to rehabilitate; Death Row is just the ultimate end point of a broken system. 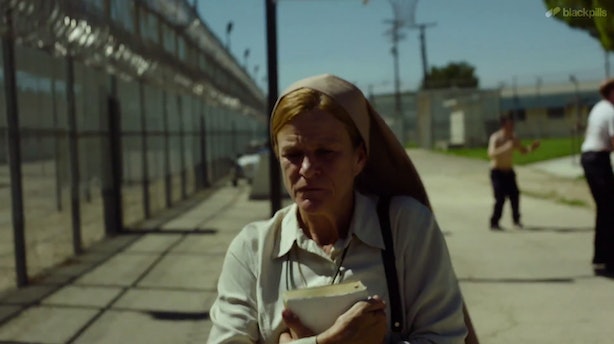 Speaking to Women and Hollywood, Ben Asher noted that for these women, "the legal system and the social system did not manage to cultivate them, understand them, or forgive them, but perhaps filmmaking might be able to expand the discussion, and make a difference." When making the film, she chose to mention the crime each woman committed somewhere in their story, but deliberately avoided starting off with the information. Speaking to FF2 Media, Ben Ascher explained that "[starting off with the crime] created a completely different experience, because when you enter the moment knowing what she did, you picture the horrible crime scene and it’s harder to attach to her." She also noted that "it’s very rare to find a woman in prison who wouldn’t be considered a victim themselves," and it’s that queasy position she wanted to force the audience to reckon with, on top of seeing the system surrounding them.

Dead Women Walking began as a digital series, meant to be viewed as separate shorts. But Ben Asher told FF2 Media that "it wasn’t until I started editing them that I realized a film would be better, more powerful, if audiences watched them in order and didn’t select one or two to watch out of order." It’s the unrelenting march towards finality that makes Dead Women Walking such a heart-rending, excruciating experience, filled with both darkness and humanity.