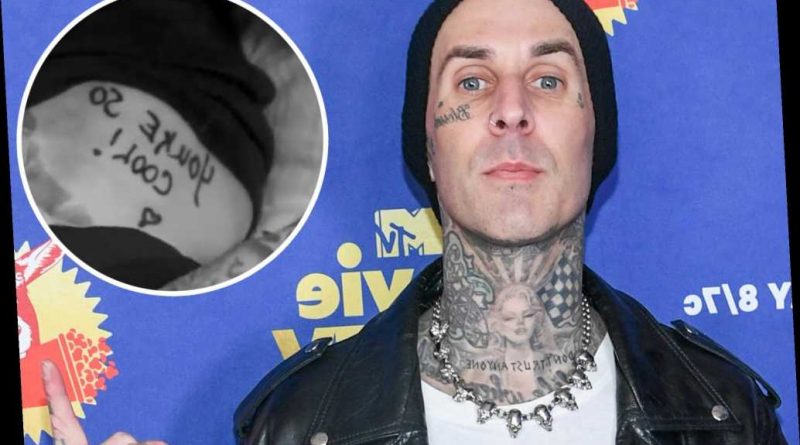 Travis Barker shares ‘I love you’ note from Kourtney Kardashian

Kourtney Kardashian cozies up to boyfriend Travis Barker in LA

Say it ain’t so, this note will not go.

Fans believe Travis Barker’s new thigh tattoo of the words “You’re So Cool!” could be a permanent tribute to his girlfriend Kourtney Kardashian.

The Blink-182 drummer, 45, shared an Instagram video of the tattooing process on Thursday, seemingly giving himself the new ink with the help of artist Chuey Quintanar.

“You’re So Cool!” is the title of a Hans Zimmer track from the 1993 film “True Romance,” and Barker also shared a photo of the lyrics written on a napkin from the Beverly Ambassador Hotel, a location from the movie.

He shared more snaps of the tattoo on Friday along with a still from the Quentin Tarantino-directed flick, captioning the post, “I like you, Clarence. Always have. Always will.”

Commenters pointed out that the tattoo looked a lot like Kardashian’s handwriting, which fans got a glimpse of in the “I love you” note and love letter Barker previously shared on his Instagram Stories.

“Kourtney wrote that, huh,” one fan commented on his fresh ink, while another wrote, “Its tattoo official.”

Kardashian further fueled speculation that she inspired the ink by commenting “You’re So Cool!” on her boyfriend’s tattoo video.

Page Six reported that the longtime friends were dating in January, with Kardashian making things Instagram-official on Valentine’s Day.

The reality star, 41, is no stranger to pop culture references herself, as she donned a shirt with NSFW lyrics from a punk rock song during one of the new couple’s recent outings.