Tropical Storm Fay made landfall on Friday afternoon after lashing the East Coast with heavy rainfall and strong winds. The storm struck about 10 miles north of Atlantic City, the National Hurricane Center said in its 5 p.m. advisory.

The storm is currently located about 90 miles south of New York City, and is moving north at about 14 miles per hour, the hurricane center said. It has maximum sustained winds of about 50 miles per hour.

The storm is expected to move towards the north and northeast at a faster speed on Friday night and on Saturday. It will likely hit the New Jersey coast before moving inland over southeastern New York and western New England, according to the hurricane center. It’s expected to weaken in the coming days and become a tropical depression by Saturday morning.

The storm will likely produce 2 to 4 inches of rain throughout much of the northeast.

“This rain could result in flash flooding and urban flooding in areas with poor drainage where the heaviest amounts occur,” forecasters warned.

“Tonight’s not going to be a great night for outdoor dining. Get your furniture and umbrellas and everything in so they don’t go flying and create a new kind of danger,” New York City Mayor Bill de Blasio said Friday.

Tropical Storm #Fay has formed off of the coast of North Carolina – the earliest 6th Atlantic named storm formation on record. Previous record was Franklin in 2005 on July 22nd. #hurricane pic.twitter.com/gJFhXbSRZJ

The storm will generally miss Washington, D.C., and Baltimore to the east with only a little rain expected there. The storm is very compact but contains a lot of moisture. As a result, torrential rain will fall from the Delmarva Peninsula northward into upstate New York. In the heavy tropical bands, rainfall will surpass 2 inches per hour. 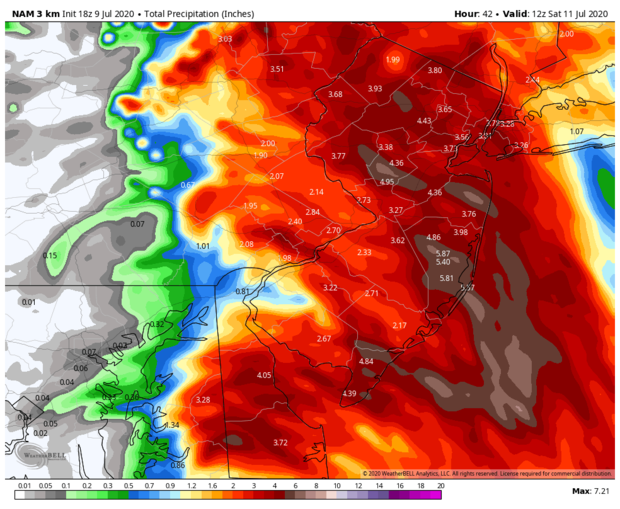 With sea surface temperatures along its path barely at warm enough levels to support a tropical storm, and with its proximity to land and increasing forward motion, the system is not likely to become very strong.

The orange shading below indicates gusts of 50 to 60 mph. This may be strong enough to knock down a few trees and for spotty power outages. 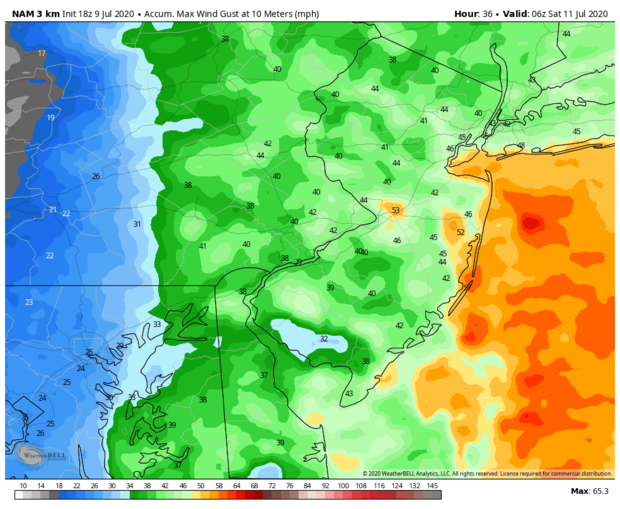 Already off to a rapid start, the 2020 Atlantic hurricane season is threatening to be one of the most active in history.

Colorado State University released an updated seasonal forecast Tuesday increasing its projection of the total number of named storms from 16 to 20 — a large jump. (Normal is 12.) If 20 occur, that would tie for the second most active season in terms of storm number. The CSU forecast also calls for nine hurricanes and four major hurricanes, both above normal. 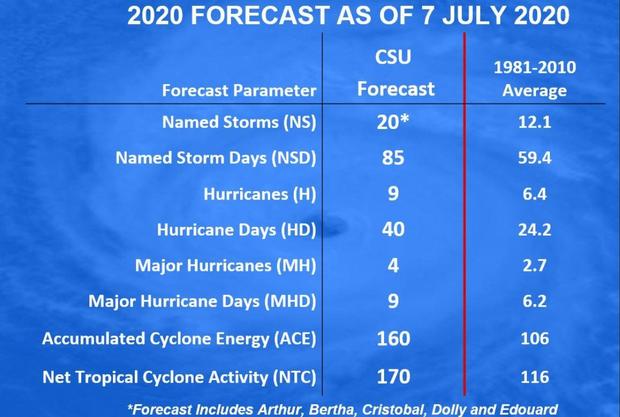 There are three main reasons for the expected active season. In the Pacific Ocean a weak La Niña may form, which typically is associated with more activity in the Atlantic Ocean. Also, rainfall across northwest Africa has been far above normal. Lastly, and most important, water temperatures in the Atlantic are far above normal, providing more fuel for growing storms.