Home » Lifestyle » Why Does Trump Want Teenage Girls to Get Pregnant? 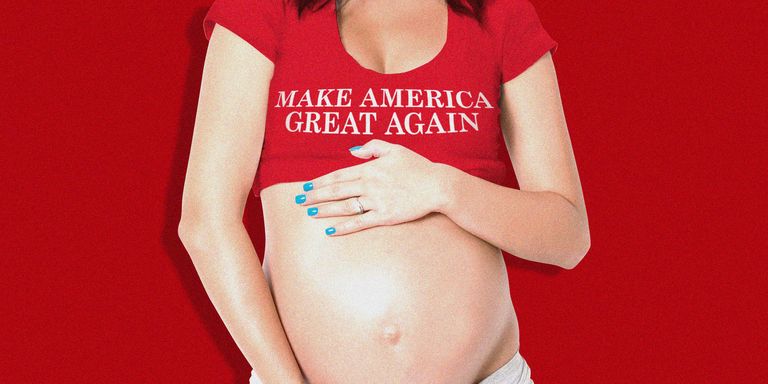 Now, virtually all adults in America have premarital sex. This has been the case for decades. That is because—and this may shock you if you are a sentient robot—people like sex. A lot. We do it for pleasure, just like pigs, bonobos, and dolphins. It is very hard to stop people from doing things that give them pleasure.

And people know this, which is why an estimated 96 percent of Americans want their kids to be taught about abstinence until marriage.

That shouldn’t shock anyone, despite the fact that abstinence as a policy has basically never worked, and the notion that we might return to a time when virginity was gently safeguarded until marriage is an absurd one.

In the America of the 1850s, where premarital sex was seen as a greater sin than it is today, the rate of abortions to live births is estimated to have been one to five or six. The sexual shaming of the 19th century produced 500 brothels in New York, along with cheeky Zagat-type gentleman’s guides to visiting them, with sarcastic introductions like “Not that we imagine the reader will ever desire to visit these houses. Certainly not.” Even when we look to the 1950s—the era that people who want to “make America great again” seem to regard with the greatest nostalgia—Americans weren’t more chaste when it came to premarital sex than they are now.

You could certainly deduce from this that abstinence-only education does not “work.” It hasn’t, at least when it comes to preventing unintended pregnancy or delaying the age of sexual encounters. (A 2011 paper from the University of Georgia found that states that taught abstinence-only sex education resulted in 73 teen pregnancies per 1,000 girls aged 14–19. Meanwhile states that taught comprehensive sex education resulted in only 56 teen pregnancies per 1,000 girls aged 14–19.)

But it really depends on what your goals are.

It certainly works if the goal is to get teens pregnant. In states like Texas, where most schools teach abstinence-only sex education, approximately 35,000 teens get pregnant per year. They have the highest rate of repeat teen pregnancy in the country.

“Texas, where most schools teach abstinence-only sex education, has the highest rate of repeat teen pregnancy in the country”

Of course, no one pushes for more pregnancies just for the sake of pregnancies. Except when they do. Paul Ryan has seemed pretty chipper on the notion when he said that the aging population “is going to be the new economic challenge for America: People, I did my part, but we need to have higher birth rates in this country.” Last year, the Wisconsin State Rep Scott Allen blamed abortion for the country’s labor force shortage and subsequent economic decline. LifeSite did the same, claiming that Toys “R” Us had put themselves out of business by supporting Planned Parenthood, along with Starbucks and other corporations. They remarked:

There is probably some truth to the notion that economic growth hinges upon population growth. If you run a sandwich shop, you will do better if there are 10 mouths to feed rather than one. This does not, however, take into account that if people are truly economic assets, all consumers should be equal. You could let in every Syrian refugee and the economy in the country would prosper just as it would if there was a population boom in the form of American children.

Maybe it’s beneficial to have native-born consumers, or, maybe it’s racism and xenophobia.

Regardless, many women would actually like to have more children, but often do not, largely for economic reasons. There are, of course, many ways to make having children more manageable for women. Ensuring paid maternity leave and health care for children would be great—except Trump is currently trying to cut funding for Children’s Health Insurance Program (CHIP).

One could, I think, pretty reasonably argue that the consequences of unwanted pregnancies are devastating on women and curtail their potential. As of 2011, only 51 percent of teenage mothers will earn a high school diploma. Thirty percent of women who drop of out high school claim to have done so because they got pregnant. Less than two percent of women who get pregnant before 18 have a college degree by the time they’re 30.

If you value education, those are bad statistics. But good news! Current GOP voters do not value higher education. Fifty-eight percent of Republicans now think higher education is bad for the country. In 2017 the NRA’s Wayne LaPierre claimed “academic elites” were one of “America’s greatest domestic threats.” (I am yet to see anyone murdered with a copy of Thucydides’ History of the Peloponnesian War, but I will not rule it out.)

But without an education, woman will never be able to grow up to one day be President! That’s fine by the GOP. Only 20 percent of female Republicans and 16 percent of male Republicans hope to see a female president in their lifetime. In 2017, hostile sexism was a major factor in whether or not people supported Trump.

“If your ideal woman is young and pregnant and posing no economic or social threat to her male counterparts, then abstinence-only education is a great success”

The children don’t fare much better. The poverty rate for kids who are born to unwed teenage mothers who don’t finish high school is 78 percent. They’re 50 percent more likely to repeat a grade, and three times as likely to be incarcerated.

If you care at all about the lives of the actual people doing the child producing, of course, it’s a disaster.