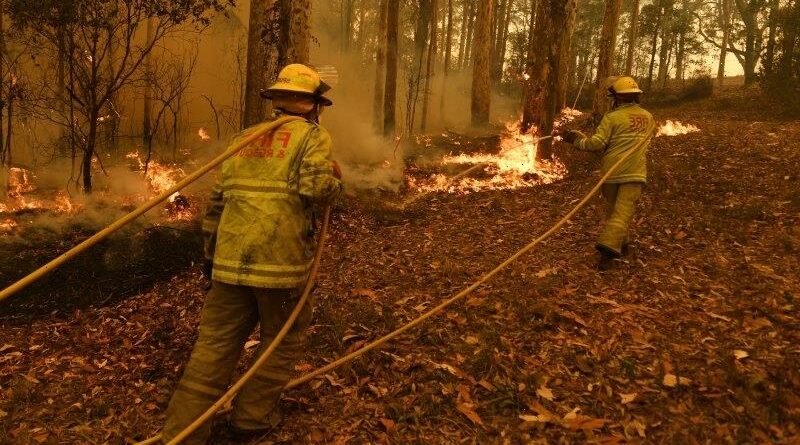 Two books, scores of stories both tragic and heroic, one theme – that the catastrophic fires of the 2019/20 summer in south-east Australia were merely a foretaste of what lies ahead.

Greg Mullins is probably the most experienced and knowledgeable firefighter in the country. Bronwyn Adcock is a skilled journalist who found herself in the middle of the inferno that engulfed the south coast of New South Wales on New Year’s Eve, 2019. In Firestorm and Currowan, they tell the same story from these different viewpoints. 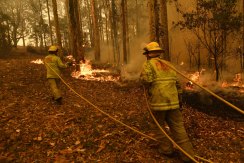 Mullins watches, then throws himself into the fight as overwhelmed disaster-management agencies battle nature at her most ferocious across hundreds of kilometres of fire front. Adcock tells the personal tales of the residents of small communities north of Batemans Bay facing the sheer terror of trying to save homes, and then lives, as thousands of locals and holidaymakers flee to the coast as the idyllic landscape behind them ignites and explodes.

In 1972, aged 12, Mullins joined his father’s Terrey Hills volunteer bushfire brigade in north-west Sydney and has been fighting and studying out-of-control fire ever since, in the process rising through the ranks to a 14-year stint as Commissioner of Fire & Rescue NSW. Upon retirement in 2017, he immediately rejoined the Terrey Hills outfit, where his journey had begun.

In Firestorm he gives graphic accounts of what it is like to be in the front line against some of the fiercest blazes in our history, while demanding that politicians, councils and urban planners work with a new and far more inflammable world.

Mullins sums up the reason for this shift in two words – climate change.

He cites the terrifying phenomenon of pyroconvective storms, almost unheard of in the 20th century. Mullins confronted the aftermath of one in the Black Saturday fires in Victoria in 2009.

With the temperature in the low 40s, the “extreme weather drove flame fronts that in some locations reached 88,000 kilowatts per metre (kW/m) – akin to cramming 44,000 bar heaters into a one metre space – and drove towering convection columns 10-12 kilometres high into the stratosphere, bringing dry air and extreme winds down to the surface.

“Fires were so hot they generated storms that deposited burning embers up to 33 kilometres away, starting new fires.“

Clearly, dedicated volunteers in trucks with hoses find extinguishing such conflagrations impossible, and are often lucky to get out alive. Some of them don’t.

Mullins doesn’t pull his punches when it comes to the people he holds responsible for the worst of what was to happen in 2019/20. While acknowledging that atmospheric CO2 levels have been rising since the early 19th century, he makes two crucial points.

First, that we have known about the looming threat for 40 years, and concedes that even if all carbon emissions stopped tomorrow, it would be decades before the atmosphere returned to a less dangerous state. But he insists that doing nothing will make 2019/20 the new normal, if it isn’t already, and that by 2060, will be considered a cooler than average year.

Second, he rips into a political class that simply doesn’t get it, or refuses to even listen. Prime Minister Morrison gets both barrels for refusing to meet with a panel of experts months before the crisis, warning him of a looming catastrophe and the urgent need for more resources, especially aircraft, and then claiming that he had made these resources available, when in fact he had not.

Mullins’ case is compelling, his expertise impossible to ignore, and yet his desperate plea for sensible policy on the eve of the Glasgow summit, and that Australia finally take responsibility for its actions, or inactions, are shrugged off.

This is not an ideological argument, though many populist conservative loudmouths would have you believe it to be. One only has to read Currowan to see that ideology counts for nothing when entire stretches of coastal bush are feeding an insatiable incinerator. Adcock makes many of the same points as Mullins, which is hardly surprising given what they have both witnessed first-hand.

She writes fluently, and at times movingly, from her on-the-spot viewpoint of the events of that grimmest of New Years. But she is also a dedicated journalist and deftly handles the tricky task of reporting events – dates, times, places – while introducing us to real people and their often wildly different reactions to the catastrophe that has engulfed them.

Accuracy and empathy make for a challenging cocktail to shake together, and Adcock serves this one with great skill. You know that she is writing from personal experience and doesn’t shy away from her own emotional response to one of the greatest crises of her life, but she manages to maintain sufficient distance to keep the reader abreast of what is going on further afield. And there was a lot going on that week.

Firestorm and Currowan should be at the top of the in-tray of every political leader in the nation. We’re in late spring. These days, that’s when catastrophes start smouldering. Time is short.