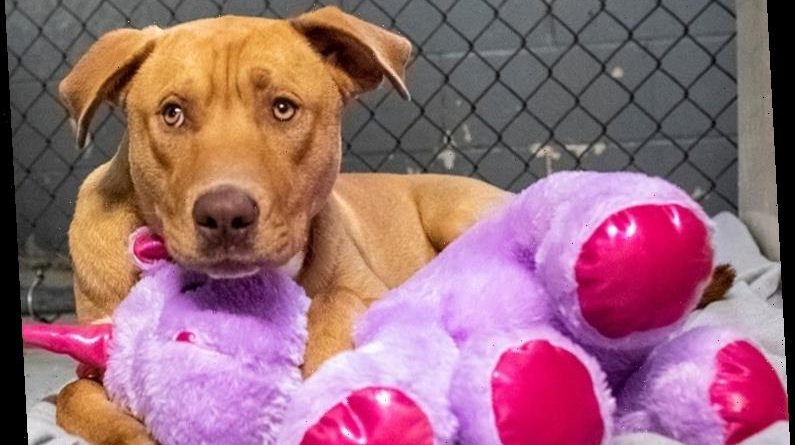 The stray dog who stole the world's collective heart after he repeatedly tried to steal a purple unicorn toy is on the move again.

Sisu, the one-year-old Lab mix who kept darting into a North Carolina Dollar General in an attempt to nab a particular unicorn stuffed animal, is now heading to a rescue ranch to get some special training before moving to his forever home.

The pooch will be making the trip with the toy he coveted thanks to animal control officer Samantha Lane, who purchased the $10 plush for Sisu before bringing the dog to a Duplin County Animal Services shelter.

Before Sisu and his unicorn left the shelter for their training at the rescue ranch, the pair made an important stop.

"We took him back to the Dollar General so he could see the employees there," explains Joe Newburn, a supervisor at Duplin County Animal Services.

The workers at the Kenansville Dollar General (about 80 miles from Raleigh) were the ones who called animal control to help Sisu after they realized the stray dog was sneaking inside the store every time the automatic doors opened — each time making a beeline for his beloved purple unicorn.

"He actually had to go through the whole store to get to that unicorn. It was in the Easter section he went to that same unicorn and kept pulling it out, and finally, he had done it so much the store called us," Newburn explains of how Sisu came under the shelter's care.

Since Lane bought Sisu — who was named by shelter workers after the dragon in Disney's new film, Raya and the Last Dragon — his unicorn, the dog hasn't let the toy out of his sight. "It goes wherever he goes," Newburn tells PEOPLE. "We've noticed as long as it stays by him, he's good, but we do notice when the unicorn gets dirty, he won't mess with it. We've had to wash it a bunch. If it's dirty, he puts it off to the side and just stares at it, but once you wash it, he'll lay on it." After visiting his friends at Dollar General, Sisu moved to Lab Rescue LRCP to receive training to address his behavioral issues. Newburn says Sisu currently has trouble interacting with other dogs, likely due to his time as a stray, so the shelter wanted to provide him with training before sending the pooch to his new home. Lab Rescue LRCP's Sterrie Weaver will work with Sisu over the next few weeks to help the dog feel more comfortable around other canines and ready him for life in a home. "A lot of strays have to fend for themselves and have had to worry that other dogs will take their food or toys, and they usually calm down once they realize they're in a safe place," Weaver says of Sisu's situation.

Newburn says he and his team plan to keep track of Sisu through his training and adoption journey and that the shelter is amazed by all of the attention the adorable canine has received. Newburn has been fielding calls from as far away as Australia and Russia from people wanting to know more about the dog who just wanted to be with his unicorn.

"Every time you put that unicorn with him when he's laying on it, he looks happy, he's at peace with that purple unicorn, and it's felt good. It's been very uplifting to my staff. It's a tough job, but it's a rewarding job, and I see smiles on my staff's faces now," Newburn adds.