Being a celebrity looks pretty cool from the outside looking in, but then you get a little bit of perspective like actress Vanessa Morgan just served on social media and you’re like, "Oh. Yeah. It’s also a job." Morgan’s been absent from the past couple episodes of her show, Riverdale, prompting some insensitive "fans" to comment on her absence. Don’t worry though, she’s on it. Vanessa Morgan’s response to trolls bullying her over her Riverdale absence is epic and also offers a unique perspective into the world of acting. Jerks, take note.

The 26-year-old actress plays Toni Topaz, Jughead’s first friend at his new school, Southside High. Fortunately for Morgan, she and Topaz share a lot of qualities, one of them being their fierce independence and sense of self. Morgan told Teen Vogue, "[Topaz is] chill; she’s a boss; she doesn’t really care about what anybody thinks."

"Boss" is exactly the word I’d use to describe Morgan’s response to her social media trolls. Riverdale fans might have noticed Topaz has been missing from the past two episodes, which for some reason, people are taking personally. Haters disguised as fans are tweeting messages at Morgan telling her to "get back to work," as if it was her personal decision to take a few episodes off. Morgan jumped on Instagram at the beginning of October to set the record straight. She shared the following message on her Instagram stories:

Morgan also shared she’s taking a break from Twitter. "There’s a lot of mean people on there & it puts me in an awful mood, it’s not healthy," she wrote. "Be nice to people & Protect your hearts guys!! Love you." 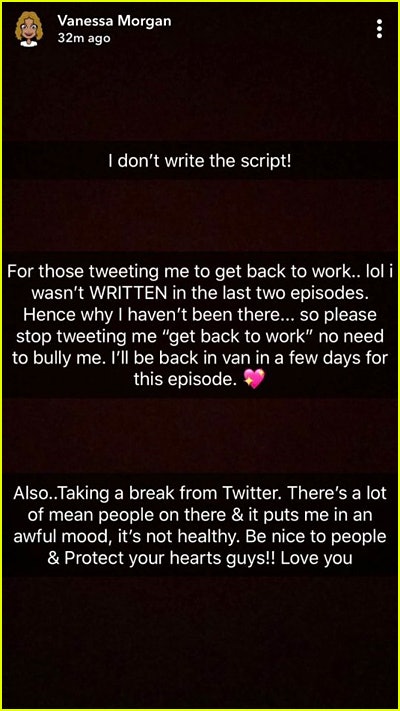 In contrast to the miserable people online, Morgan says the cast of Riverdale welcomed her into their family right away. She and actress Madelaine Petsch (who plays Cheryl Blossom on the show) were extremely close prior to Morgan hopping on the cast in Season 2. Morgan claims this helped her transition. Last year, she explained to Teen Vogue,

Morgan also drew parallels between her experience joining the cast and Jughead’s experience transferring schools. "I was like a new kid at school. I watched all of season one. I loved it," she said. "I watched every single episode and the fact that I get to be a Serpent… The last episode, when Jughead puts on his jacket in slow-mo, I was like, ‘Yes.’ So, when I put on my Serpent jacket for the first time, I had that moment [too]."

All of this to say: Back off, trolls. Morgan has a great support team behind her, an awesome career, and the confidence to handle your BS with grace and dignity. Come back when you’re ready to play nice.