‘Beauty isn’t about hair!’ Victoria’s Secret model reveals how she found the courage to shave her head after years of being told she had to have long, straight locks to be successful

Victoria’s Secret model Sharam Diniz has revealed why she made the decision to shave her hair off.

The 27-year-old model who was born in Angola, Africa, but is now based in New York City, revealed to Refinery29 that she had been chemically relaxing her hair since she was five-years-old because her natural hair was too ‘painful to manage’.

She also recounted how when she was younger, she always wanted to have ‘long, straight hair and I could never have it.’ 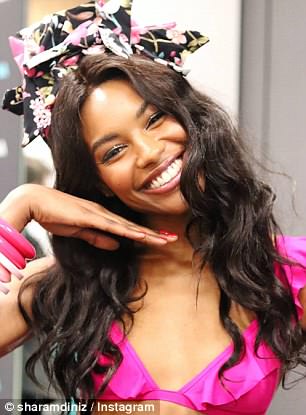 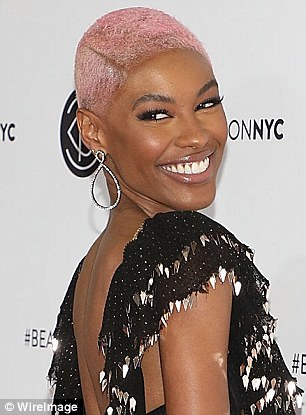 Makeover: Victoria’s Secret model Sharam Diniz, 27, has revealed why she made the decision to shave her hair off 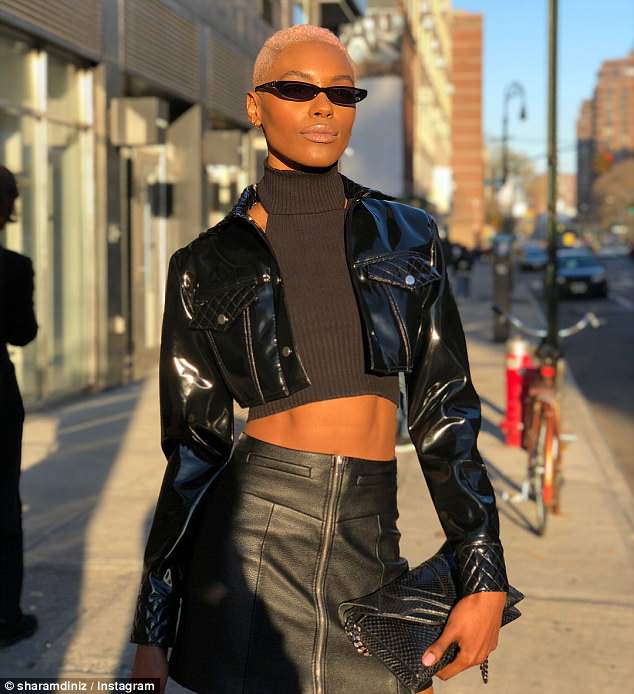 Old habits: The model who was born in Angola, Africa, but is now based in New York City, revealed that she had been chemically relaxing her hair since she was five-years-old

New look: Despite straightening her hair because her modelling agency in Europe asked her to, Sharam now believes that beauty should be about embracing ‘perfect imperfections’

‘When I looked at covers of magazines when I young, I didn’t ever see a Black girl rocking an Afro, so I became obsessed with the hair I saw on TV and in music videos and magazines,’ she explained.

‘I wondered why I didn’t have that. But after 15 years of treating my hair with aggressive chemicals, it lost its life, so I took a break from relaxers and started wearing wigs. That felt amazing.’

As her mother was a flight attendant, travelling internationally to places like Paris, she would bring wigs home from all across the globe for Sharam to play with.

And the model shared that she loved experimenting with different looks that could instantly transform her into a different character.

However, when she was 17, the half-Portuguese model moved to Portugal to pursue her career in Europe, and after she was signed to a major agency, she was told she would need to straighten her hair.

‘I had an Afro, and although it was a weave, it was labeled as “too commercial” at the time. To land high-fashion, editorial jobs, I needed straight hair. I didn’t really understand why, but because I already had so much experience with changing my hair often, I was okay with it,’ she explained.

When she moved to New York a couple of years later, Sharam stopped straightening her hair and started getting a weave sewn in instead.

However, this time consuming process would take almost a whole day and she started thinking about shaving her head instead of going through with the arduous process every couple of weeks.

‘Seeing so many beautiful and bold women, like Maria Borges and Lupita Nyong’o rocking their natural texture and forcing the industry to accept what natural beauty is made the decision easier.’

She also explained that she wanted to tempt herself out of her comfort zone of ‘feminine hair’. 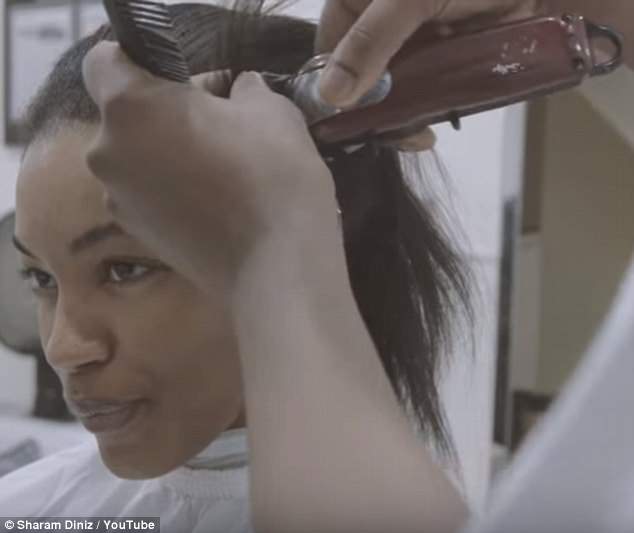 Transformation: Sharam also filmed the process for her YouTube channel and revealed it took her five months to pluck up the courage to go ahead with her transformation 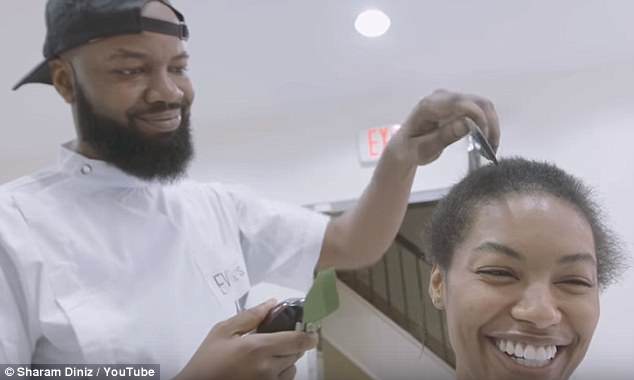 Joker: During the video she joked with her hair stylist that she was worried about the shape of her head without her long hair 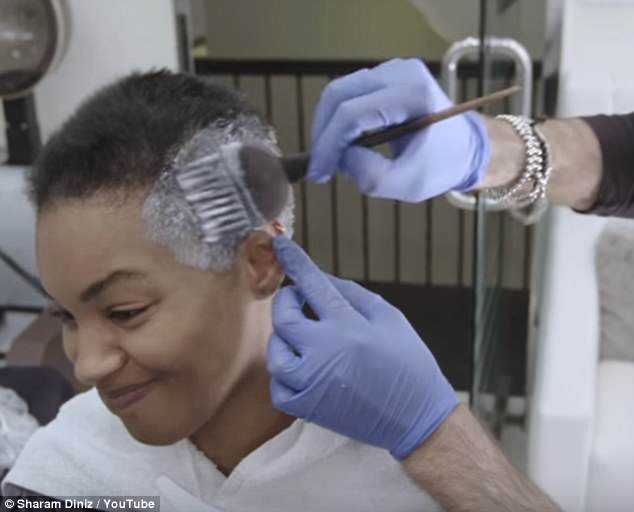 Empowered: However she also shared that she felt excited to see her natural hair for the first time in years and was looking forward to seeing it grow out 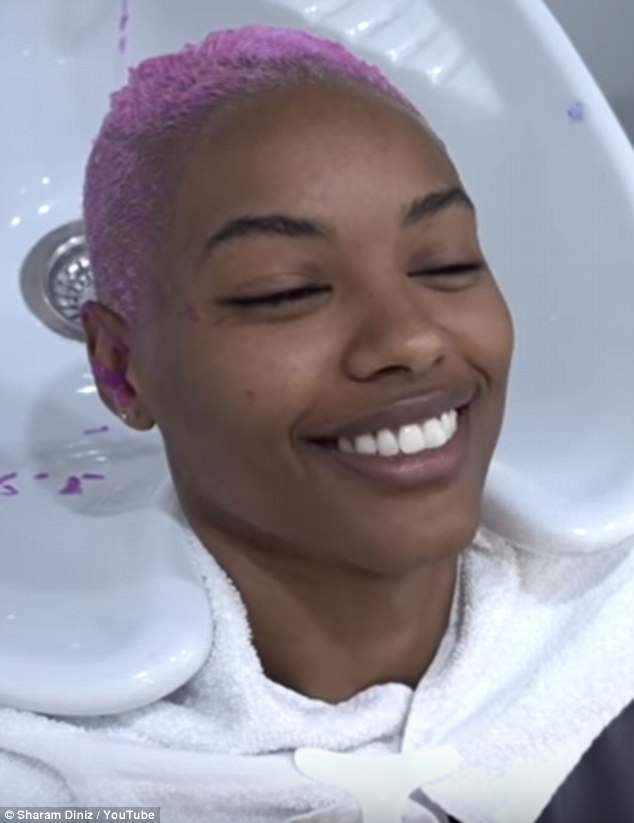 Positive: Although she was worried about what her management would say about her new hair do, Sharam has been pleasantly surprised by the positive reaction

‘We’ve been brainwashed to think that being feminine means having long, straight hair. No, you can see the beauty of a person with short hair, too. It’s a movement now,’ she added.

And although she wanted to do it, it took Sharam five months to pluck up the courage to actually follow through with her plan as she was nervous she would lose work over it.

Sharam also filmed the process for her YouTube channel and joked that the one thing she did know was that she had good ears so they wouldn’t be a problem.

She also admitted that she was scared she would have a ‘really, really bad head shape’, however as her hair colorist applied bleach and then a pink dye to her newly shaved tresses, Sharam expressed her excitement at seeing her natural hair for the first time in years.

She now believes her hot pink buzz cut has given her a ‘new lease of life’ and she’s amazed by the positive reactions from other women.

‘Women with short hair were coming up to me, complimenting mine,’ she revealed.

‘The reaction on social media and walking around the streets just confirms I made a great decision, and even my agents at One Management, who I was most worried about, love it. I feel like I’m on a wave. If I had known before it would’ve been this good, I would’ve cut it much sooner.’

And at the end of her video she concluded: ‘Beauty isn’t about hair. Beauty is about the way we see ourselves, being comfortable with our perfect imperfections and own it and embrace it… but that doesn’t mean I won’t go back to my long Sharam hairstyles. I will eventually if I miss it but for now, this is it, short and pink.’