Home » Lifestyle » Vikings’ Aussie star: ‘The emotions can come in like a freight train’

When actor Sam Corlett was cast as Norse explorer Leif Erikson in the Netflix series Vikings: Valhalla, his mind shot back six years to a desk in a high school on the NSW Central Coast.

“I remembered exactly where I was sitting in my history teacher Mr Gill’s classroom, learning about Erikson, his dad, Erik the Red, and the Greenlanders,” he says. “I loved it all.” 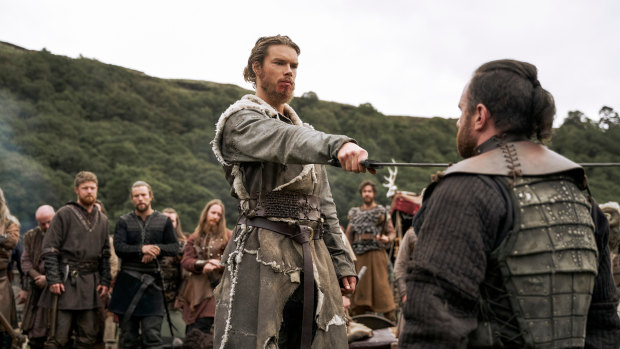 Australian Sam Corlett (left) follows in the footsteps of Travis Fimmel in landing a key role in Vikings: Valhalla.Credit:Bernard Walsh/Netflix

The history lessons dove deep into Viking history, particularly the Berserkers, a brotherhood of elite Scandinavian warriors who ate hallucinogenic mushrooms and fought with delirious fury before battle, but Erikson stood out.

Considered the first European to encounter North America, and celebrated annually on Leif Erikson Day in the US, Canada and Iceland, Erikson was a mythic hero. But fleshing out a man born in approximately 960AD, and described in 14th century Icelandic manuscript Saga of the Greenlanders as being strong, wise, magnanimous and “of striking appearance”, meant Corlett had to dig deeper.

“He is known in history as the great late Erikson but, to him, he’s just a guy trying to figure out how to be a human and how to use his gifts for the betterment of the people around him,” he says.

The second series of Vikings: Valhalla, originally a follow-up to the History Channel’s six-long series Vikings, sees Erikson on a new path.

Erikson, enraged by the killing of his partner, Liv, by Olaf Haraldsson, the half-brother of Harald, at Kattegat, is seeking revenge against Olaf. Freydís and Harald, severely injured in the battle, are holed up in a cabin in the woods.

Corlett says his journey as Erikson evolves significantly in season two, powered by grief and rage.“Season one was very much about the becoming of a man, outshining the shadow of his father,” he says. “In season two, he has to kind of come to terms with that rage.”

Corlett, who filmed Vikings: Valhalla in Ireland, says exploring and imagining the intense feelings, bouts of fighting and almost infinite anger his character carries required a balance in his own life off-set. For season two he stayed in Greystones, a small coastal town in County Wicklow, where a friendship with twin brothers David and Stephen Flynn, who run a vegan lifestyle health brand, cafe and farm, The Happy Pear, became essential.

Their camaraderie, along with meditation, early morning ocean swimming, fitness training and a vegan diet helped him with homesickness.

“The rest of the cast lived in Dublin because they wanted to be amongst a little bit of hustle and bustle,” he says. “Whereas, I really liked this small coastal town, and these amazing people, because in a way, even without the sunshine, it reminded me of being back home in Terrigal and the community that I have here.” 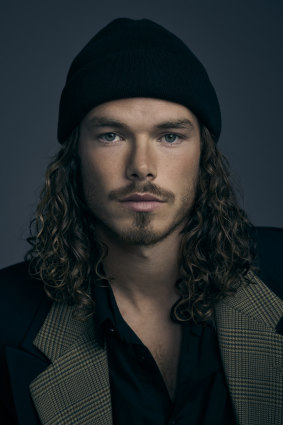 “But, you’re actually releasing energy that could have been held for quite some time in the body from a lifetime of experiencing things. After one day’s filming in particular, I was walking from the bathroom, and I just got punched in the gut by a window of emotion. I started crying for literally half an hour.

“The person who usually looks after my costume and does my make-up was really supportive and left space for me to allow my emotion to come through. It was quite a beautiful day because the whole set felt that we were telling a story. Although what we were filming was a moment in this epic, for me it was really quite powerful.”

Corlett, who graduated from the Western Australia Academy of Performing Arts in 2018, has had a striking career trajectory. His first screen appearance was in The Dry, Robert Connelly’s feature film also starring Eric Bana, followed by a role as Young Luke in the final two seasons of Netflix series Chilling Adventures of Sabrina.

“My dad’s a carpenter, my mom’s a therapist, I worked doing carpentry during my gap year for my dad,” he says. “But I would drive an hour-and-a half to and from Sydney to do these acting courses when it was just an interest.

“Acting was a passion and then the obsession it became. I am super grateful for the position I’m in but there’s something about the Australian tall poppy nature. I find it very hard to accept praise or have adoration or be treated higher than anyone else. It makes me feel very uncomfortable.”

He recalls an extraordinary day when he found himself having lunch in Byron Bay with Hollywood actor Matt Damon, who dispensed essential advice.

“He said, ‘You don’t change but the world around you changes’,” he says. “For me, even going from being 25 on the call sheet with Sabrina, to today being number one in the call sheet with Vikings Valhalla, the set treats you differently. It makes me try to come up with lots and lots of different tactics to disarm that.”

In that vein, Corlett also spends time working as a creative artist. He has designed men’s jewellery in collaboration with the brand Merchants Of The Sun, featuring his hand-drawn symbols. All profits are donated to the Cancer Council.

“I love acting but I’m also passionate about my art,” he says. “It’s helped raise funds for the floods, for Ukrainian refugees and for the Cancer Council because my mum battled cancer three times while I was growing up and that is something very close to my heart. I’m very lucky to be able to do these things in my life as well.”

Vikings: Valhalla is on Netflix from January 12