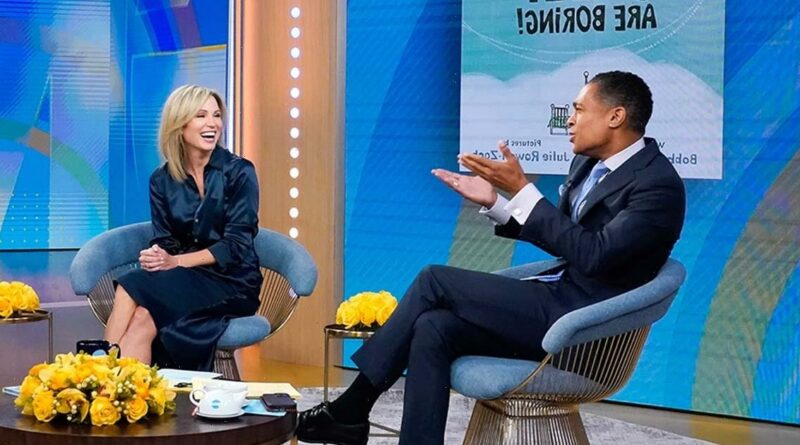 Before Amy Robach and T.J. Holmes’ alleged relationship status made headlines, the pair opened up about their “cute” half-marathon training.

“[One] tip is to train with friends,” Robach, 49, said in a March 17 TikTok video shared via GMA3: What You Need to Know’s official account. “You set the agenda, you say, ‘Here’s when we’re meeting’ and then you actually make an appointment. It becomes social and fun when you’re working hard [and] at least you feel the excitement of doing it with someone, you don’t feel alone. I really think that’s a huge big part of it, to have a run buddy.”

As the former NBC News correspondent revealed her fitness tip, she pointed to her colleague — who had a sweet reaction to the gesture. “Aww, she pointed at me when she said, ‘friend.’ That’s so cute,” Holmes, 45, gushed in the clip.

Robach and Holmes — who were anointed cohosts of Good Morning America’s third hour in September 2020 alongside Dr. Jen Ashton — first became running buddies in early 2021. After training together, the pair went on to run several half-marathons before tackling the 2022 TCS New York City Marathon last month.

“[I’ve been training] with you and I run behind you, and you keep the pace,” Holmes joked in the March video after being asked if he agreed with Robach’s running advice. “I don’t have to worry about these things. … You’re the pacer, does that make me the pacee?”

TJ and Amy have some tips on how to prepare for a half marathon! #running #halfmarathon #halfmarathontraining #unitednychalf #gma3 #tjholmes #amyrobach

After agreeing with the former CNN personality that she sets the pace during their workouts, Robach proclaimed: “We’re gonna both be finishers and that’s what counts.”

“You are one [of the] cheesiest personal [coaches],” he quipped while laughing.

Robach — who married Andrew Shue in 2010 — and Holmes’ relationship made headlines nearly eight months later. The Michigan native and the BET alum — who shares 9-year-old daughter Sabine with wife Marilee Fiebig, whom he wed in 2010 — were spotted looking cozy in a series of photos published by the Daily Mail on Wednesday, November 30. The twosome have yet to publicly address the snaps and Us Weekly has reached out for comment.

Despite the pair’s silence on their supposed romantic status, a source told Us that Robach and Holmes’ reported relationship “blossomed from a close friendship.”

The insider noted on Wednesday: “They always had a spark and their work trips away together brought them even closer. They have been trying to keep their relationship a secret until they were ready to announce.”

Celebrities Who Have Run Marathons: See Their Finish Times

Amid the controversy, Robach — who shares daughters Ava and Analise with ex-husband Tim McIntosh — and Holmes both deleted their respective Instagram accounts. The 55-year-old Melrose Place alum — who shares three sons with ex-wife Jennifer Hageney — also scrubbed his social media page of any photos that featured Robach.

Holmes, who coparents daughter Brianna and son Jaiden with ex-wife Amy Ferson, and Robach have since returned to their GMA duties — business as usual.

“Who’s looking forward to the weekend?” the CNN Sunday Morning alum teasingly said during the Thursday, December 1, broadcast before Robach raised her hand. “Of course we are. Welcome, everybody, to GMA3: What You Need to Know. Always good to see you.”

Neither Robach nor Holmes further addressed the drama during the Thursday episode as they covered the news.