Home » Lifestyle » We let robots control our homes – so why not an artist?

Lauren Lee McCarthy wants you to think about the role technology plays in your life. The Los Angeles-based artist has created a work called Lauren 2017 – Lauren as opposed to Alexa – which involves a series of networked smart devices including cameras, microphones, switches, door locks, taps and other electronic devices being installed in someone’s house. 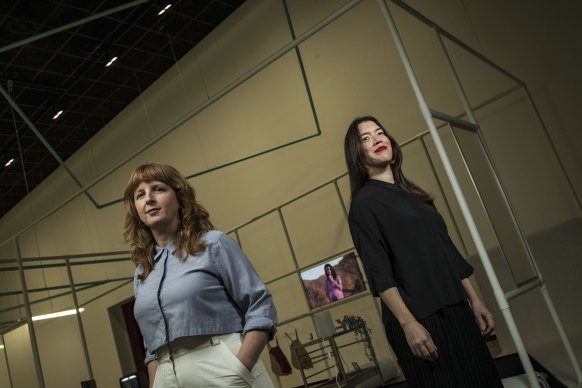 “I then remotely watch over the person 24/7 and control all aspects of their home. I aim to be better than an AI because I can understand them as a person and anticipate their needs,” McCarthy says. “The relationship that emerges falls in the ambiguous space between human-machine and human-human.”

The piece is part of a new show opening at the Australian Centre for Contemporary Art, called Data Relations, created by guest curator Miriam Kelly.

Data – and the way it is handled – is one of the most expansive issues of our time because it touches everyone and everything people do in their everyday life, says Kelly, explaining why she created a show around the idea.

For many of us, technological advances outweigh the downsides – but as robo-debt and the Medibank and Optus hackings underline, data can be misused and, in the wrong hands, becomes dangerous.

Initially, Kelly spent of a lot of time looking at how to define data, focusing on the past 20 years and the digital age. The very meaning of the word has changed in that time, she says, and everyone you speak to has a different understanding of it.

The title is drawn from analyses of the data economy as having generated new forms of social interaction, according to Kelly, while at the same time perpetuating discrimination, bias, forms of social oppression and class division.

McCarthy’s work is deliberately provocative. “She’s questioning what it means to be controlled by data in the way that all of our apps do, but we don’t think about the people behind [the apps] … behind those controls is someone determining what information we want to know,” Kelly says, adding that the artist met her partner though a dating app.

McCarthy’s Surrogate, 2022, also on display, is similarly thought-provoking. In it, she offers herself as a surrogate and via an app allows whoever “employs” her total control over her mind and body.

The show’s co-ordinating curator, Shelley McSpedden, says it’s a propositional piece, looking at what someone might demand of her – can they dictate to whom she can talk, what she can eat, what she can watch on television. “She’s really pushing those boundaries, asking how far are we prepared to go,” McSpedden says.

Hong Kong-born artist-researcher Winnie Soon’s work, Unerasable characters I-III 2020-22, is based on a series of censored tweets taken from Weibo, which appear and then disappear, a reference to the impermanence of social media, as well as underlining the efforts by authorities to erase them and silence the writers.

“The point of this collection of data is not to read those words, it’s more about the poetics of what Winnie has done with that text. Over a period of 24 hours, there is a full projection of the words, and then they disappear. That incredible sense of a constellation that then becomes blackness,” says Kelly. “[It explores] how we relate to each other, how that is mediated by technology but also the people who are monitoring our posts, particularly in the context of Hong Kong.” 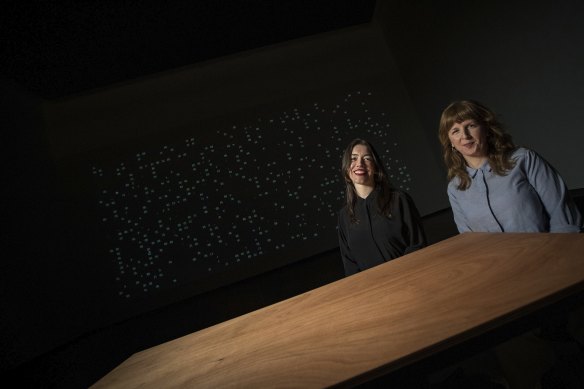 Kelly and McSpedden in front of Winnie Soon’s work.Credit:Darrian Traynor

Brain and Lavigne also have a video work in the show, Synthetic messenger 2021, which traces a bot as it tries to artificially inflate the value of climate change news and reporting by clicking on ads. As it tries to mess with the all-powerful algorithms of the net, it makes you think about what we might do to wrest back control and subvert the system.

Many of the works ask us to think about the fact that data is not something that is mined, that exists in and of itself – it is created, says Kelly. Power is significant, too. Information looks very different depending on who has it – in the hands of our private health insurer, intimate details about our medical histories are fine but not when it is accessed by hackers.

A Summer School will be held in January, with many of the artists present and engaging with the public in talks, workshops, performances and site-visits, examining the social consequences of a data-driven society.

According to Kelly, the artists included in the show reflect on the data economy and techno-mediated relationships in ways that are profound, humorous, poetic and confronting. “The impacts of what has been described as the ‘data revolution’ … cannot be understated within our economic, political, environmental, social and cultural contexts. Data now permeates contemporary life.”