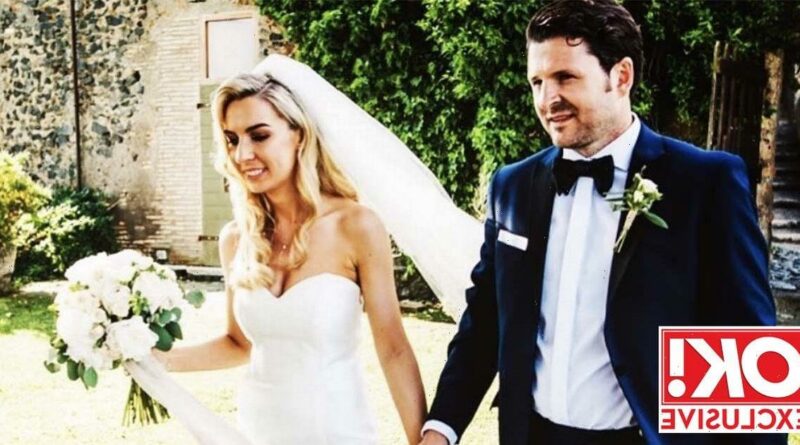 I’d always imagined our first Valentine’s Day as a married couple would be full of romance and passion. But on 14 February in 2019, I instead found myself lying on a hospital bed next to my husband Ciaran, who was going through chemotherapy. Sweetly, he’d still managed to get me a balloon and a teddy with some help from the nurses.

When he was first admitted to hospital, I slept on the chair next to him. When the nurses realised I’d never leave him at night, they set up a mattress on the floor. But for this special night, they went even further and moved an extra bed into his private room– he was susceptible to infection, so he had a private room anyway. We held hands through the night. It definitely wasn’t what I imagined when I said “I do” but we were handling it all as a team, as we always did.

A month earlier, we had been honeymooning in South Africa and the Maldives. Paradise! Since our three-day Italian wedding, which included a barbecue and pizza party, life had been a dream.

I was a PR manager and he was a software developer. After seven years together, we were finally married and excited about the next chapter. Ciaran is handsome, funny and outgoing. He can talk to anyone but I felt lucky he’d chosen me. It sounds cliché but our wedding was the best day of my life.

I was so happy I never dreamed something sinister was around the corner. But when we walked up a mountain during the honeymoon, Ciaran got out of breath. I joked, “This is what happens at your age!” I was pleased he booked a doctor’s check-up for our return home but I wasn’t worried. I thought it was a viral infection, or work and wedding-planning stress. He went for a full health screening two days after our honeymoon and they told him they’d ring in two weeks with the results. But two hours later, while we were sitting on the sofa with a cuppa, the clinic called.

“You need to head to the A&E department right now,” they told us. When we got there we had to ask for a certain doctor, who took us into a private room. He then said, “I’m so sorry to tell you that you’ve got advanced blood cancer – acute myeloid leukaemia.” It was devastating. We just sat together and cried The cancer was at such a critical level, he was lucky to be alive. They said within three weeks, we would possibly have to talk about end-of-life care.

Ciaran wanted to go home to digest the news but he had to stay in hospital overnight and begin chemotherapy the very next day. He remained in hospital for the next 30 days.

It wasn’t easy to stay upbeat but we tried to focus on what we could control rather than what we couldn’t. So we made his room really lovely, with nice bed covers and photos everywhere – like his own little apartment.

Hopes for a happy ending

Every day, no matter how sick Ciaran was, he’d get up, make his bed and shower, determined to keep some normality in his life. We learned about what the chemotherapy would do and the cures that were out there.

I never allowed myself to imagine losing him. I concentrated on the happy ending. And after six gruelling months of intensive treatment – 60 individual rounds of chemotherapy and a stem-cell transplant from his brother – that’s what we were lucky enough to achieve. We were beyond ecstatic. I believed he’d get better and he did.

The one thing that helped me cope and stay positive at this toughest of times was journaling, including writing gratitude lists and goals. When Ciaran got better, we realised we wanted to go into business together, not be on separate paths. We were career-obsessed before.

The experience made us totally re-evaluate our lives. So The Head Plan journal was born,which is a notebook with prompts to make goals and reflect, and we hope it helps others feel happy and in control, no matter what’s going on. Ciaran’s shock diagnosis was horrific. But it made us realise what was truly important – and that’s a lesson we’ll never forget."

Ciaran: ‘I was scared I’d make my new wife a widow’

"After seven years together, I proposed to Denise on a boat during a fountain show in Dubai. She deserved this grand gesture. Seeing her walk down the aisle to me was the best moment of my life.

I imagined going all out for our first married Valentine’s Day. Seeing Denise lying next to me in a hospital bed was a horrible way to spend it. I felt guilty. She told me not to be silly. We encouraged each other to stay positive.

I am so grateful my brother was a match for the stem-cell transplant. It’s given me a very good long-term outlook. The initial period after a transplant has risks but now I’m at a point where I have check-ups once every six months.

I turned 40 during the treatment, so we had a belated party. Not long after, Covid-19 happened. It would have been easy to despair with all the restrictions. But we’ve had to practise what we preach in the journals. We hope they can help others like they helped us."

The Head Plan, a guided wellness journal to keep you inspired, motivated and focused, is available at theheadplan.com, priced at £32.