Melbourne experienced its wettest day in more than 20 years during a shivering start to the weekend that is set to continue before the week warms up.

With almost 25mm of rain falling in Melbourne in the 24 hours to 9am Sunday, it was the most significant August downpour since August 27, 1999, the same day 34,000 fans watched the MCG scoreboard catch fire at a match between Carlton and Richmond. 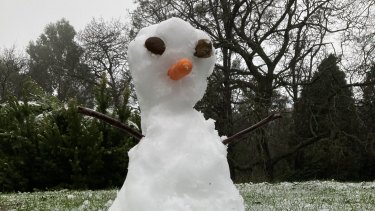 Snow fell on Saturday in the Dandenong ranges, this snowman appeared in Ferny Creek.Credit:Twitter user: @ozhillbilly

There’s a chance of hail on Sunday and about 5-15mm or rain, with more rain likely to fall in the south-eastern suburbs than in the north and west.

After snow fell on areas as low as 400m on Saturday, the snow level is set to rise on Sunday to about 800m.

“We’re not going to get flurries at Ballarat or Macedon or anything like that.”

The temperature is set to rise gradually each day during the week and may break above 20 degrees on Saturday before another cold front, not likely to be as dramatic as this weekend’s, hits on Saturday night.