Is your PlayStation 5 constantly crashing, leaving you unable to play any of the new games you recently purchased? You’re not alone.

At issue is a little known error code: CE-108255-1. And while it’s unclear how many machines it has affected, complaints have been cropping up on social media since the release of the PS5 on November 12.

The issue goes like this: While playing a game, its app will crash within minutes and display the message, “CE-108255-1. Something went wrong with this game or app. Reporting this error to Sony Interactive Entertainment helps improve PS5 hardware, software, and services. This report might include personal information.” I received the message more than 100 times, turning my PS5 into $500 home decor. 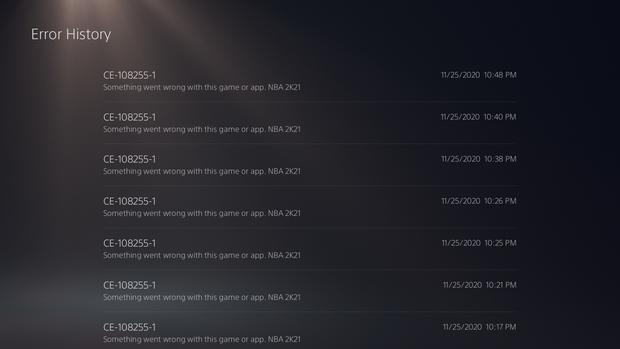 I spoke with seven people who experienced the same error code. Four said Sony refused to take action and told them to wait for a software update addressing the error code. Two were able to secure replacements, and one stopped experiencing the issue after a system update on November 25. Sony said the patch improved “system performance,” and issues with charging controllers and disc versions of games, but didn’t specify if it addressed the issue of games crashing.

Sony didn’t respond to questions about the error or how many units have been sent in for replacement. The company acknowledged the error on its support page, but none of the suggested steps to “see if the issue can be fixed” worked. The major retailers where customers rushed online to purchase the PS5 — Best Buy, Walmart, Amazon and Gamestop — didn’t respond to questions about how many consoles have been returned. Target declined to share its numbers.

I called Sony’s customer support line three separate times but we were unable to find a solution. At first, I was told to wait for a patch, but after realizing my console was crashing while playing a PS4 game, an agent started the replacement process on November 30. Sony sent me a shipping box and I dropped off the console at FedEx. It could take between 10 to 15 days for Sony to investigate.

Andrew, a 31-year-old from Long Island, New York, said his experience with Sony has been “absolutely frustrating.” He said he received the same error code as others, and at one point, his entire console turned off when a game crashed. He shipped his PS5 back to Sony and is waiting to hear back as they investigate. “Phone support was very nice and understanding, but it took multiple chat sessions and phone calls before they took it back,” he said. “Hoping the rest of the process is smooth.”

Shahiq Saeed, a 17-year-old from Pakistan, said he purchased his PS5 at a local retailer, which he described as a “mom-and-pop shop.” But when he fired up the system, the error code prevented him from playing his new games. The same day, he returned to the store and exchanged his console for a new one. He hasn’t had an issue since.

“I was quite frustrated and disappointed by the whole thing as I had just spent so much money on a new system. I was very excited to try out all the games and the whole experience. Luckily, I was able to get it exchanged and am relieved it is working now,” said Saeed.

Some haven’t been so lucky. Stuart, a 28-year-old from London, said Sony hasn’t given him the option of exchanging his console for a new one. “I’m pretty annoyed at how silent they’ve been about it, no public statement about an issue that seems to be affecting a huge number of people,” he said. “I’ve heard some people have been able to return their unit in the U.K., but no luck for me so far.”

Alex Waldruff, of Sycamore, Ohio, said he gave up entirely and returned his system to Best Buy for a refund. The 34-year-old said Sony’s troubleshooting tips on its site didn’t resolve the problem and he was never able to reach a support technician over the phone. “It was frustrating,” Waldruff said. “I’ll most likely buy another one once they’re more established as being reliable. I don’t want to buy another one and go through the same thing.”

The error code even inspired its own Twitter account. Nick Hall, a 19-year-old from Orlando, started the @CE1082551 account after experiencing the error code. The issue prevents him from playing any of the six games he purchased from Target for over $300, with all crashing within minutes. He hasn’t had any luck troubleshooting the device, he said, and support agents haven’t given him the option to get a replacement.

“I made the account because I found myself searching the error code on Twitter, Reddit, and Google, over and over again, waiting to see if there was any news or fixes, and I wanted there to be something that would pop up on Twitter other than a bunch of peoples tweets asking for help,” Hall said. “I’ve been posting if there’s a system update and if it helped my problem or not so both the people searching and Sony know.”

“I’m hoping I can convince the next support representative I speak with to fulfill the year-long warranty that comes with the console, but as I and many others have found out, they make it really, really hard to actually use it.”

However, Serkan Toto, founder of video game industry consultancy Kantan Games, said the issues are relatively normal and “priced in” by early consumers. Toto pointed to past problems Sony had when rolling out new systems. In 2014, gamers reported errors with the PlayStation 4, which Sony said affected only 0.4% of consoles.

“I would say that the PS5 errors are, in this big picture, relatively mild,” Toto told CBS News in an email.

Joost van Dreunen, the founder of New Breukelen, a video game investment firm, agreed. “It is common for the first shipment of devices to stumble upon unexpected errors. All manner of consumer electronics — smartphones, laptops, and consoles — have a low percentage of errors early on in their release,” said Joost van Dreunen. “Contemporary consoles have a lot of complexity under the hood and, unfortunately, problems only present themselves when the first few million units hit the market.”

Van Dreunen experienced this first hand after purchasing the first MacBook Air in 2008, which Apple quickly replaced. He had the experience after getting the Xbox Series X this year. He said the system failed him in less than 24 hours, but Microsoft quickly replaced it.

“It is a real bummer, of course, to have your new device break so soon. It also presents an opportunity for device manufacturers to show how much they appreciate their early adopters and quickly resolve the issue,” he added. “Perhaps more so than during previous releases, it is key that manufacturers respond swiftly and adequately. A negative experience can increase demand uncertainty and throw a monkey wrench in an otherwise carefully planned release campaign.”

A Sony customer service representative said the company is working with the developers of several popular PS5 games — “NBA 2K21,” “Marvel’s Spider-Man: Miles Morales,” “Call of Duty: Black Ops Cold War” and “Demon’s Souls” — to release a patch to fix the issue. The rep said the issue is affecting users who purchased both versions of the PS5, the standard edition and the digital-only version.