Creative differences? After Kanye West’s highly anticipated Donda album was released on Sunday, August 29, the rapper apparently wasn’t as enthused as many of his fans.

The musician, 44, posted a curious message via Instagram on Sunday afternoon, hours after the tracks were released and widely discussed via social media.

“Universal put my album out without my approval,” the rapper wrote. “And they blocked ‘Jail 2’ from being on the album.” 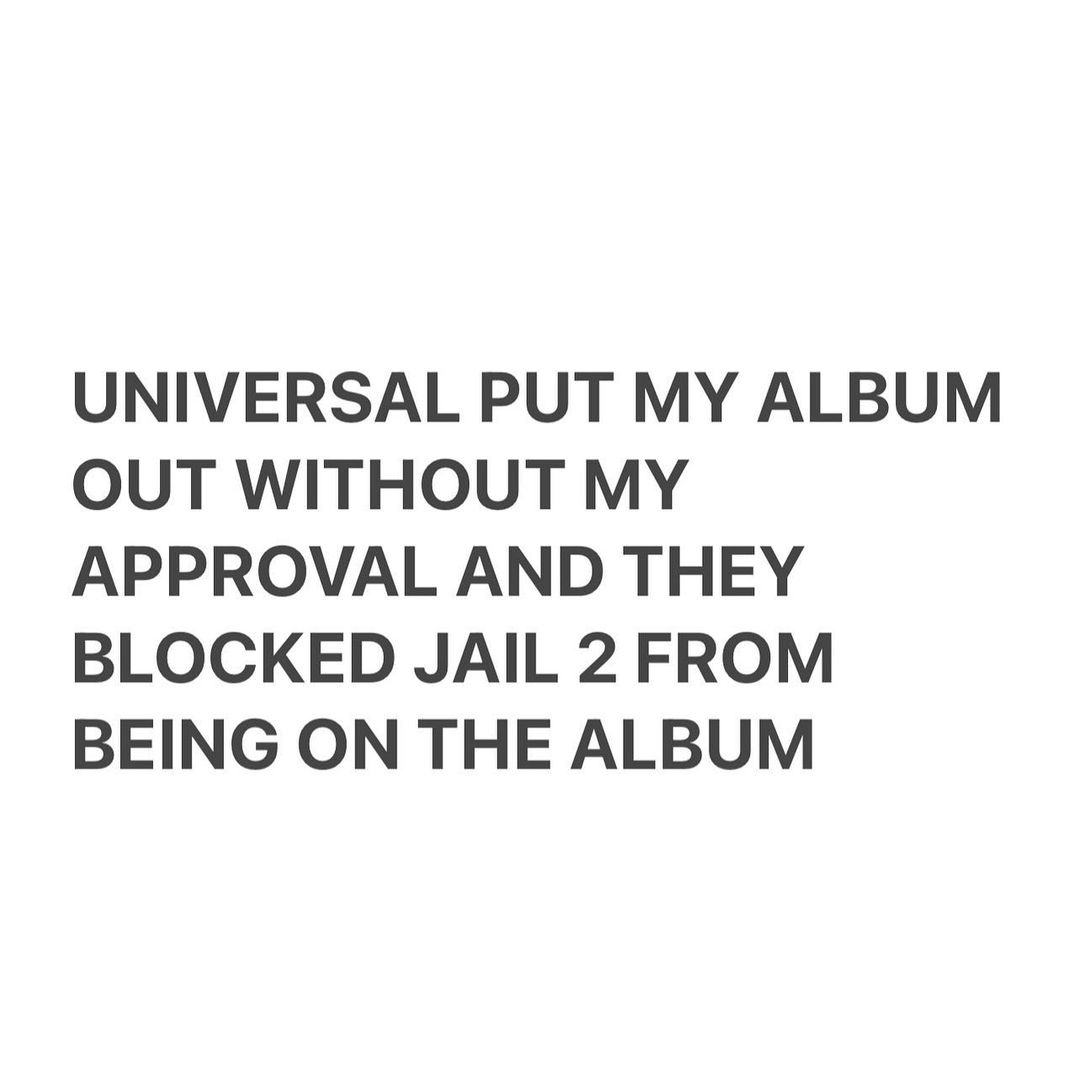 It isn’t clear what West means by “blocked” since there are songs titled “Jail” and “Jail Pt 2” as the second and 24th tracks, respectively, on the 27-song LP. Variety reported that “Jail Pt 2” was originally unavailable to stream when the album was first released at 8 a.m. ET, but it was later added to the tracklist around 1 p.m. ET.

Hours earlier, West’s estranged wife Kim Kardashian shared her support for the album. The Skims founder, 40, posted screenshots via Instagram Story that she listened to his new songs “Donda,” “Come to Life,” “Lord I Need You,” Hurricane” and “Ok Ok, Pt. 2.”

The “Gold Digger” performer’s recent claims are not the first time he’s gone toe-to-toe with his record label. One year prior, the Yeezy designer went on a Twitter rant about his contract.

“I’m not putting no more music out till I’m done with my contract with Sony and Universal … On God … in Jesus name … come and get me ⛷,” he tweeted in September 2020.

In a second Twitter message, he wrote, “I’m not industry bro … I don’t care… I’m in service to Christ … we need world healing … I miss my brothers… I refuse to argue with black men on labels we don’t own… even twitter.”

He then added another message to the thread, “I have the utmost respect for all brothers … we need to link and respect each other… no more dissing each other on labels we don’t own.”

West has teased his 10th LP for more than a year, from an exclusive preview in a July Beats commercial to hosting listening parties for his fans. His third listening experience occurred on Thursday, August 26, at Soldier Field in Chicago where he recreated his 2014 nuptials to his estranged wife.

During the event, Kardashian wore a white Balenciaga wedding gown and a veil as she held hands with the “Famous” crooner.

“Kim supports Kanye and was happy to be on stage in a wedding dress,” a source exclusively told Us Weekly at the time. “She has always respected his art and ideas and was all in for the performance.”

At the event, the Illinois native seemed ecstatic to have the KKW Beauty founder — who filed for divorce in February after seven years of marriage — on stage with him.

“He was smiling so hard you could feel his energy radiate as he was looking at her,” an eyewitness told Us at the time. “If you watch the video from the [event], you will see he said, ‘You look pretty.’”