In the depths of this hard, wintry lockdown, Melbourne's cultural leaders are wargaming an ambitious summer of outdoors music and theatre – but the city's cultural rebirth will likely look like nothing we've ever seen.

Imagine a concert at the Sidney Myer Music Bowl, where the grassy amphitheatre is a checkerboard of little enclosures for households to picnic at a safe distance.

Imagine sitting at a table, cabaret-style, in the Malthouse courtyard, watching a new production at a bespoke theatre that's just been sprayed down with a mass-disinfectant machine. 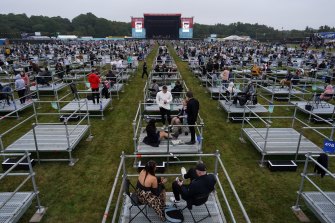 Imagine Day on the Green's winery crowd masked and temperature checked, ordering food and drink on an app for delivery to a quarantined enclave.

These are ideas canvassed by companies who spoke to The Age – emphasising that nothing is set in stone – who are desperate to satisfy a deep reservoir of demand for live performance in Melbourne, while not creating breeding grounds for a new pandemic wave. (Melburnians will have to wait for an easing of restrictions, with all plans dependent on revised health guidelines.)

"We think there is the opportunity for a summer season at the Bowl which will look quite different and has a higher utilisation perhaps than previous summers," she said.

Spencer has researched examples of COVID-safe outdoor shows from the northern hemisphere summer. One inspiration was a UK pop-up, the Virgin Money Unity Arena, which this month held "the UK's first socially distanced concert", with households divided into metal enclosures dotted around a field in front of the stage.

"We are quite interested in that, though the hill (at the Bowl) means constructing things requires some thought," Spencer said. 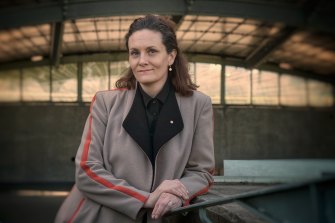 There are practical and economic challenges, Spencer adds – the Bowl is expensive to present in, even moreso with COVID-safe food, bars, toilets, entrances and exits.

"We are trying to find a model that is economically viable," she said. Punters may find ticket prices go up, or philanthropy and federal and state governments may have to chip in.

The Malthouse, meanwhile, has an ambitious plan for a cabaret-style outdoor theatre with tables in their courtyard – which other companies including Chunky Move and the Wheeler Centre hope to use, too.

Malthouse co-CEO Sarah Neal calls it their "imaginary theatre", as they haven't yet secured state or federal government support needed to fund it. But it would mean new theatre with a decent-sized audience before it is possible (or popular) to move indoors, she said.

"The space works well and there is a great sense of atmosphere," she said. "We have done a huge amount of work around health protocols and the team is ready to go as soon as we get the support. There's a really great prospect to draw people back to the precinct to have a night out, grab a drink – remember that?

A COVID-safe venue requires a lot more staff, she said, for disinfecting or distributing masks. They're looking at temperature checks on entry, and machines that spray disinfectant to efficiently clean the venue before and after performances.

Michael Newton, director of Roundhouse Entertainment which produces Day on the Green, didn’t like the look of the Virgin arena of individual enclosures.

"I thought it looked like an outdoor triage centre – awful," he said. "But I get it. It's what these times call for."

DOTG has cancelled or postponed its scheduled summer season, but is working with health authorities in several states to work out what might be possible.

"We won't be announcing any shows until we're given the go-ahead," he said.

A tentative big event at Sirromet Wines in Mt Cotton, Qld, could be a testing ground. The challenges are significant: social distancing changes entry, toilets, bars, food, the stage and backstage. "People can't even get there on buses like they normally do," Newton said.

They are looking at paperless ticketing, an app for delivering beverages to marked-out blocks that patrons cannot leave. "Personal responsibility" will be the key, Newton said, with patrons and staff adhering to strict rules.

Data from Patternmakers research revealed that, in Victoria, almost two-thirds of the nearly 3900 arts and culture attendees surveyed felt comfortable with the prospect of going to an outdoor festival or concert, compared with less than half at a large theatre or concert hall. Only a third felt they would be comfortable at a stadium or arena, even fewer at an indoors comedy club or live music venue.

In Victoria, Newton said, it's impossible to make predictions.

"We're all in this thing where we have to remain positive, cautious, adaptable and super-patient.

"It’s tricky. But the appetite is f—ing enormous, from the artists, wineries, punters, from us as a company. How good did we have it? We can't wait to be able to do it again."