Home » Lifestyle » When the going gets tough, a girl needs a gang

I have written before of my love for Judy Blume’s Are You There God? It’s Me, Margaret; how that slim song of puberty and the mysteries of belted sanitary pads ignited my 11-year-old imagination. I found the late-blooming Margaret relatable, but what I really loved was the Four PTS’s (Pre-Teen Sensations) – Nancy, Gretchen, Janie and Margaret: my first literary girl-gang.

I had encountered groups of children in other books but they were less organised, more "club" than "gang", and their adventures limited to the external world. The PTS’s were exploring interiors, secret girls’ business. It was the covertness that made me think of them as gang-ish, the feeling that together they had power – they could incite rebellion and disrupt the social order, in small, suburban ways, but still.

I found my next girl-gang when I was minding my neighbours’ kids. In the house that smelled of babies, the children were watching the video of Grease. Their dad had edited out the most edgy moments (the T-Bird’s verses in Summer Loving, Danny Zuko getting nut-slammed at the drive-in) without realising that the real danger lay in the Pink Ladies. From the minute I saw their matching satin bomber jackets, I felt the call to strut and squeal, to confide and chortle. I believed them.

Olivia Newton John with the Pink Ladies of Grease.

I had a reverence for their teenage troubles – Rizzo getting slut-shamed just for having sex, Marty’s potential #MeToo moment. The sleepover at Frenchie’s was seminal – feminal? – it was my dream to re-enact it. (To this day I love a sleepover scene almost as much as I love a falling-in-love montage.) The Pink Ladies sent me scouting for possible affiliates to help me make it through my girlhood. This much I knew: it was tough out there.

Over the years I have tweaked my definition of a girl-gang, but these are the basic requirements: a gang must have members – they might have individual traits and/or special skills, but they work for the whole. Nicknames are key, but they have to be given. You can’t name yourself, a la Lady Bird. Conversely, the role of gang leader is more likely to be assumed than assigned. Nancy is the leader of the PTS’s and it is her abuse of this power that leads to the gang’s demise. (Look, she lies about getting her period, OK?) 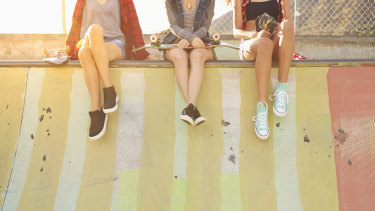 A gang needs a place to meet: a treehouse, a den, a boarding school dorm. Also, it needs rituals, secrets, lore, code, style. The romantic view is that gangs look at the world and find it lacking. They are snow-dome-shakers and world-builders. The utopias they create exist for as long as they are believed in.

Not long after Grease I discovered the video to Pat Benatar’s Love is a Battlefield – a song that still gives me a rise inside. The video was like a mini-movie, the first to include dialogue. ("If you leave this house now you can just forget about coming back!" yells her dad.) "Hey, look," a Youtube commentator writes, "she’s running away from her house at age 30." But when I was 12, I didn’t think Pat looked 30 – I just thought she looked older.

I was there with her as she escaped her traditional Italian parents. I was with her in New York City, that wild place where all girls must run to, even if it means they have to get jobs as taxi-dancers. Sure, it was desperate, but it was also a kind of heaven, Pat surrounded by girls like her, with teased hair and ripped tights and put-upon expressions. When the evil pimp with the gold tooth manhandles one of his girls, Pat stands up to him and then all the girls join her in a menacing shimmy that moves like a leviathan out of the club and into the street.

All those women with their headbands and dresses made from rags, the inclusivity of it. It was like they were asking me to join them and all I needed was a leotard and an off-the-shoulder top and some killer eyeshadow, and these things were obtainable! I too could deliver hugs and finger-gun salutes, and slink off into the sunset!

I had never been a joiner. I was too competitive, too weird, too insular. I didn’t even feel like I belonged in my family – we were all so different, we didn’t even look alike. What I really wanted was girls like me. In the girl-gang, you had that – plus protection, plus inspiration. It was the sisterhood, only I didn’t know it yet.

Other girl-gangs I have known: the awesome foursome of Adrian Lyne’s Foxes who I read about in the tawdry novelisation long before I saw the film. Smart Jeanie, Idealistic Madge, Glamorous Deirdre, Wild Annie. Although they have romantic dreams, it is clear that their friendship is paramount. Male attention is often rejected, even laughed at. In one scene, after the girls meet a street hassle chorus of "Dykes! Dykes!", they react by hugging and pawing at each other. Then they "twitch their asses in disdain as they [stalk] away".

This scene reminds me of one in my own life-movie, of being part of a gathering of teenagers, en route to a party out in the suburbs. My friend took some tampons out of her purse and turned them into earrings, and then a group of us girls copied and strode about swinging our heads deliriously, delighting in how it disturbed the guys around us.

I wish there had been more moments of female collaboration and mischievous energy, in film and in real life, but in the 1980s mainstream Hollywood was more likely to promote the idea of girls in competition. In John Hughes’ hit Sixteen Candles (1984), Samantha spies on her love interest’s girlfriend in the school showers. "She’s perfect," Samantha laments. "Practically impossible to cut up," her friend replies. 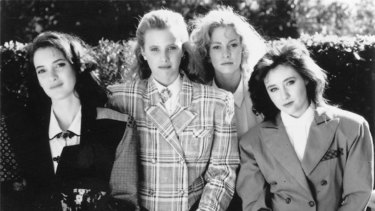 The female buddy films of the 1970s gave way to mean girl movies, with Heathers (1988) amplifying the mean girl to full-out monstrous. Veronica (Winona Ryder) – before she starts killing them off – writes in her journal: "Heather told me she teaches people Real Life. She said Real Life sucks Losers dry. If you want to f— with the eagles, you have to learn to fly."

At my all-girls school, I had no fixed position. I didn’t know the truth of anyone’s situation – I barely understood my own. Despite finding a kind of version of a girl-gang, I still spent a lot of time feeling rivalrous. I would often swap between roles of bitch and confidante, and I rarely knew my motivation.

It was sobering to find letters written back and forth between my friends and me that reveal all of us on emotional see-saws, one week hating this person, the next week someone else. There were no scrag fights but there were plenty of cold wars. Our lives were a conflux of emotion and performance and disenchantment and subtext, so much subtext. Looking back I can see how vulnerable we were, how we needed each other, but didn’t have the tools to ask.

I recently went to my 30-year school reunion. It was pretty weird but strangely reassuring. I felt OK with who and where I was, at least in that moment. I kept picturing everyone in their uniforms, younger, smaller. And now here we were, some of us in animal print, the hubbub of conversation like a living thing hovering over us. As I repeated my "story", I thought about how strange time was, and how some friendships were just like those toys that only light up when you squeeze them. I saw the remnants of my one-time quasi girl-gang and felt only fondness.