Home » Lifestyle » When your child chooses their school mates, must you love the parents?

Whether you’re the parent of a kindergartener or a high schooler, some challenges remain unchanged. And the conundrum of how much emotional capital to invest in relationships with other school parents is right up there next to screen time and homework in terms of wellbeing.

In Australia, where the majority of parents who take care of school responsibilities – including the perennial drop-off – are mothers, the terrain can be rocky. Becoming friends with other mothers opens up a whole new, advantageous social life – for you and your kids, provided you can find your people. But that can be easier said than done when mothers, 54 per cent of whom work, might not get much face time with other mums at the school. Which raises the question: how essential is it for them that you make space to also make new friends? 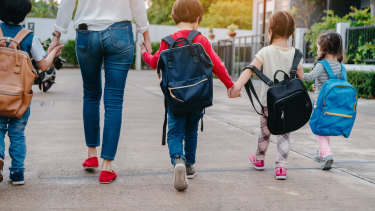 When they start kinder and school you’ll feel you need to bond with a lot of other parents. Credit:istock

“You don't have to be BFFs with other parents, but it's important to have some relationship with the families your kid is interacting with” says psychologist Debra Campbell, who stresses that this is more important in the early years.

“Inviting each other for a coffee when dropping kids off at each other's houses or making a point of getting to know each other a little at sporting games or events is ideal,” she says. “It helps you feel confident that you're all looking out for the kids, as they stretch their wings.”

For Rebecca, 34, a consultant whose son has just started kindergarten, the door to new friendships is wide open.

“I am kind of using my kid to find myself friends at the moment – I literally had no mum friends when I moved to Sydney with my husband three years ago.” Preschool, according to Rebecca, went a long way toward bridging the friendship gap, though she says her real friends are the ones at work. But primary school, she knows, is make or break.

While I’m happy that my kid has a little mate, I don’t love that he has chosen one with such a deeply weird mum.

“I have picked a few who seem cool,” says Rebecca of her newly-minted mum friends. “But the worst is that my son has made friends with the son of a truly neurotic woman who insists her son is ‘terrible with other kids’ (he isn’t, he hugged my son goodbye after their first day) and keeps zoning in on me! So, while I’m happy that my kid has a little mate, I don’t love that he has chosen one with such a deeply weird mum.”

Weird mums (or dads), or those that don’t have the same values as you, can be tricky. But what if you’re seen as the weird one? Felicity, 41, who runs her own business from home, says that for her, fitting in was tougher than it needed to be.

“I had a difficult relationship with my son's father, my ex, throughout primary school and he did a lot of groundwork convincing other school parents that I was a poor mother,” she says.

“I was never sure what he had said or what they thought of me and so I was often too nervous or ashamed to approach them in the playground. Perhaps I was overreacting but I found it very hard to overcome my insecurities.

“I think my son suffered as a result” says Felicity. “It was clear that having good relationships with other parents was key to my son being invited to parties and sleepovers. I wish now I'd been braver and made more of an effort.”

Felicity’s son is now in high school and she says she’s in a better place for it. “I’m glad that he's at an age where they begin to steer their peer relationships on their own, without input from parents. It becomes a hell of a lot easier when they can walk to school or use public transport! Suddenly the parents are almost entirely out of the picture – and thank god for that.”

But for some mothers, who find lasting friendships at the school gate, there are other challenges.

“My best friend was chosen by my daughter on her first day of kindy, she’s now 15 and we’ve been best friends for ten years” says Emily, 42, a marketing manager.

“But it’s not easy to navigate tough times with the kids. Especially when your child is being isolated or excluded” says Emily. “My daughter was by no means being bullied but she was being shifted out of a friends group in Year 8.”

While the girls will never be besties again, my friend and I will grow into old biddies together.

“In hindsight it was for the best as they were all growing into very different people, and I did feel angry about my friend’s child being sad."

For Emily, taking the high road was awkward but worth it. “We rode the wave by being open and trying not to take the girls’ actions personally and making sure we maintained time together even when the girls wouldn’t be in the same room.”

According to psychologist and author Belinda Williams of The Bumpy Road, Emily made the smart choice.

“It is important to find ways to connect beyond the shared commonality of kids,”. Says Williams, adding that it can bring stability to the children’s friendships. Although that doesn’t necessarily mean you stay out of it altogether.

“Rather than intervening, ask your child what ideas they have to resolve the issue, what supports can they leverage at school and what outcomes could result.” The happy by-product of this, says Williams, is that children learn to problem solve for themselves, and build resilience.

“There are of course times when you may need to escalate your involvement” says Williams. If there is severe bullying, it’s time for the school to step in.

But for Emily, the friendships between the two school friends are now secondary to her mum friendship, something her own daughter is more than comfortable with.

“We are now on the other side and while the girls will never be besties again, my friend and I will grow into old biddies together.”