Home » Lifestyle » Who is Ben Foden’s wife Jackie? Inside their whirlwind romance after split from Una Healy 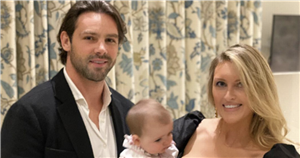 Swapping his rugby boots for ice skates, Ben Foden is just one of the celebrities lined up to take part in this year’s series of Dancing On Ice.

Alongside celebrities including Love Island’s Liberty Poole and Strictly Come Dancing’s Brendan Cole, the 36 year old is getting ready to take to the ice.

The English rugby union player made headlines in 2018 when his six year marriage to The Saturdays’ Una Healy came to an end after he admitted to cheating on his wife.

Since then, Ben has experienced nothing short of a whirlwind romance with entrepreneur Jackie Belanoff Smith, marrying just weeks into their relationship.

Here’s a closer look at their relationship…

Who is Jackie Belanoff Smith?

According to the company’s website, The Goddess Line was created in 2001, with an aim of championing “perseverance, devotion, knowledge, empowerment, wisdom, strength, courage and abundance.”

She has also tried her hand at acting, starring as an extra in 2013 film And After All and 2015 film At Home with Mystic Meg.

When did they get married?

After meeting through a mutual friend and dating for two weeks, Ben and Jackie married in a secret ceremony in August 2019.

The couple tied the knot on a yacht in Nantucket, Massachusetts in front of one witness, Jackie’s sister Leila.

Announcing the wedding, Ben wrote on Instagram: “I met a girl who seriously swept me off my feet and in a time of hardship showed me love, a deep devoted love.

“People will say we are mad or crazy or even fools, as @snackyjax and I had only been dating seriously for a little over 2 weeks before deciding to get married. But when someone like her comes in to your life, why would I wait?”

Do they have any children together?

In February 2020, the couple announced that they were expecting their first child together just seven months after meeting one another.

Jackie gave birth to their daughter Farrah in the same year.

Speaking to OK! , Jackie revealed that the couple were thinking about having another child.

“We might have another baby next year,” she said.

“I’d love to have another kid because after having Farrah I see it’s the reason I was put on this planet.”

Where do Jackie and Ben live?

After meeting New Yorker Jackie, Ben relocated to the States where he currently plays for Rugby United New York.

Despite living overseas, Ben is regular in touch with his family back home.

Speaking to the Daily Mail, Ben even revealed that Jackie and Una were good friends with one another.

“Like any relationship it takes time, but they chat online. Una’s letting the kids stay with us for a month in New York.

“I’m very proud of where Una and I have come to and I only want the best for her. She’s a great mother,” he said.