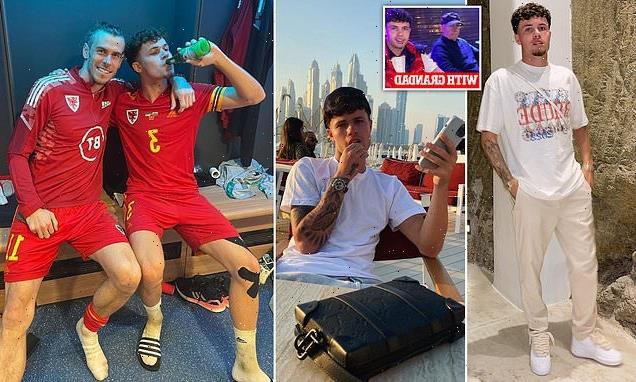 The VERY handsome Welsh footballer hoping to beat England: Neco Williams, 21, who played his first World Cup game the day after his Grandad died, is hailed as a ‘pivotal part’ of the squad

Wales may appear like the underdogs going into the World Cup 2022 match against England tonight – but there is one man who the team will likely be hoping can help achieve victory.

Wrexham-born Neco Williams has previously been noted as a pivotal part of the Welsh squad – and even played his first match in Qatar the day after his grandfather Kelvin Jones passed away.

Speaking about his appointment to Robert Page’s squad, he told BBC Sport Wales: ‘As a kid I dreamt of playing for Wales and being a professional footballer. Going to the World Cup is just the cherry on the top. 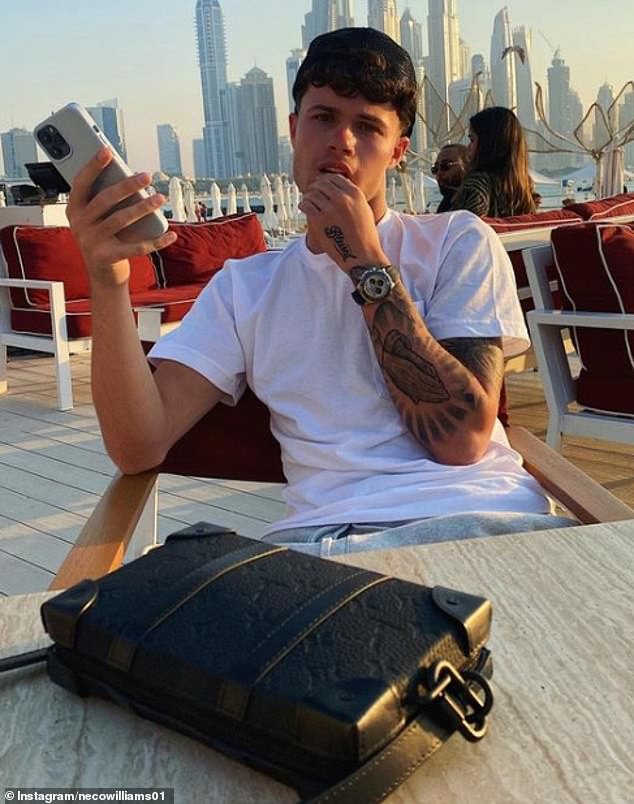 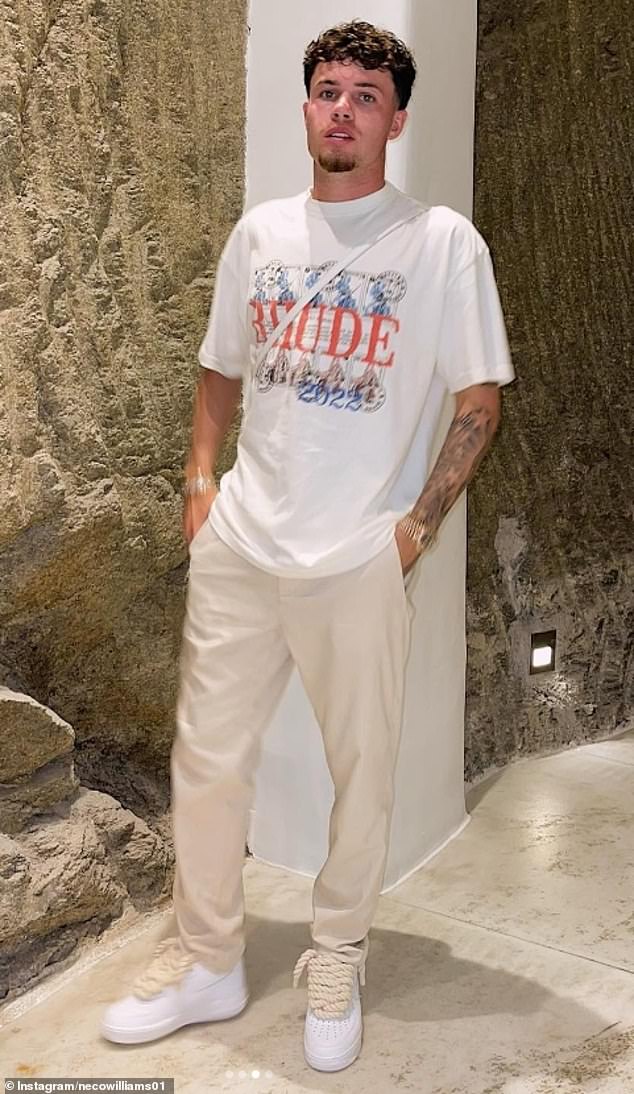 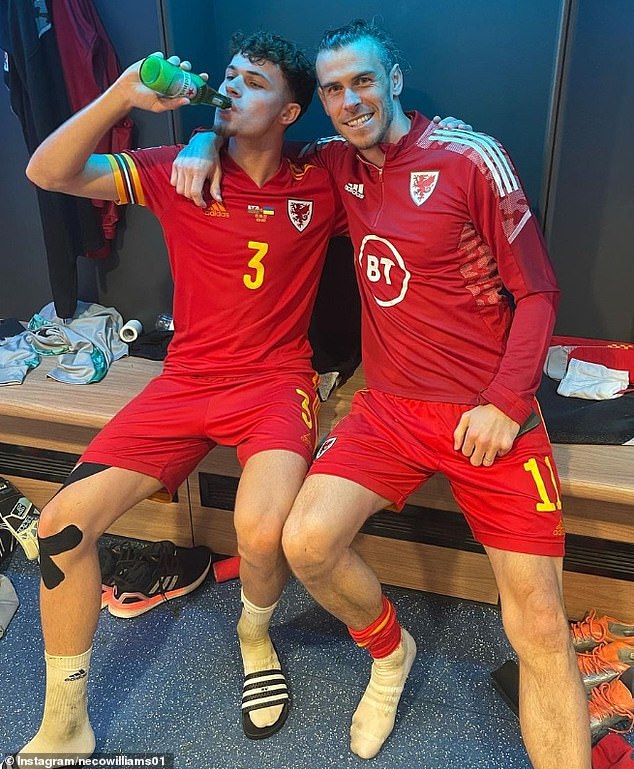 Speaking about his appointment to Robert Page’s squad, the player (pictured with Gareth Bale) told BBC Sport Wales : ‘As a kid I dreamt of playing for Wales and being a professional footballer. Going to the World Cup is just the cherry on the top’ 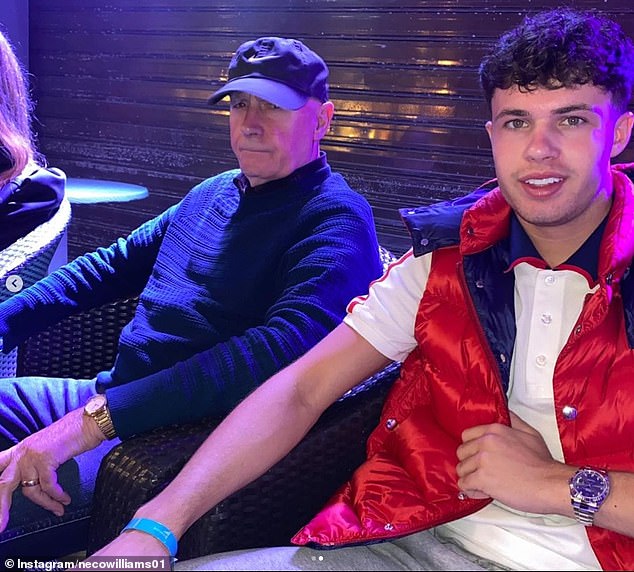 ‘All this coming together now is even more than what I dreamt of. Sixty-four years we’ve been waiting for this – a very long time – and I’m part of the squad going to the World Cup. It’s a surreal feeling.’

Williams was part of the Liverpool team which won the Fifa World Club Cup in 2019, before winning a Premier League title in 2020.

He spent the second half of the 2021-22 season on loan at Fulham, where he helped the squad win the Championship.

Having joined Liverpool’s academy when he was just seven years old, he left the team permanently in the summer, joining Nottingham Forest for £17million in a four-year deal. 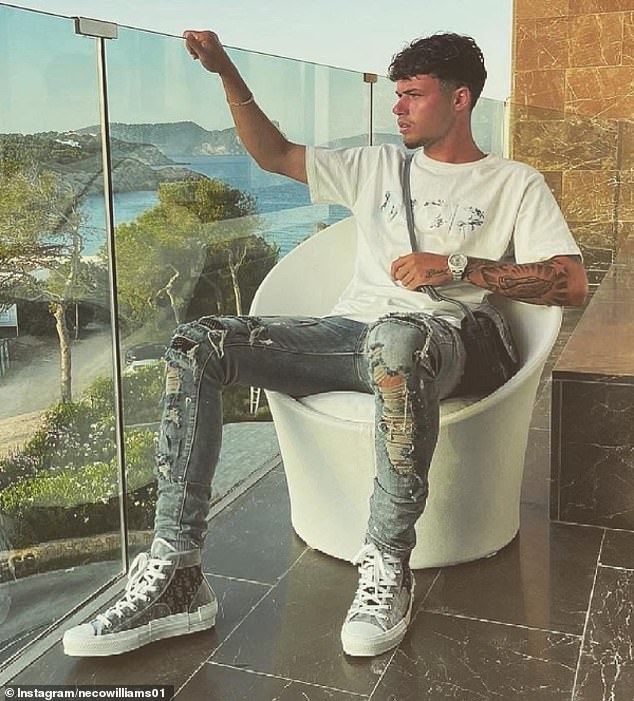 Williams was part of the Liverpool team which won the Fifa World Club Cup in 2019, before winning a Premier League title in 2020 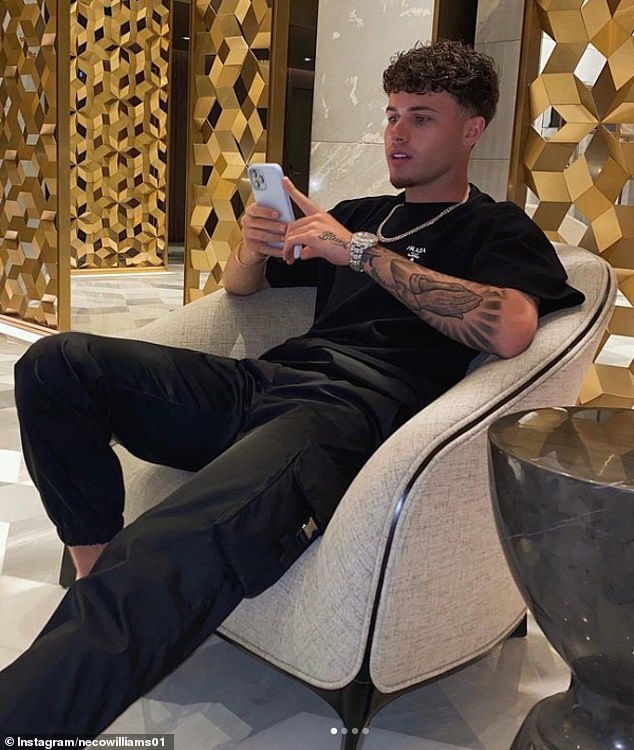 He spent the second half of the 2021-22 season on loan at Fulham, where he helped the squad win the Championship

He’s credited his grandfather for his talent, explaining: ‘I think it’s my grandad who I got it off. He was a good player and got scouted for a few teams back in his days and was one of the best footballers around my village.’

However, injuries stopped his grandfather from realising his dream.

Williams played 79 minutes in Wales first match at the tournament for 64 years, helping his side earn a 1-1 draw against the USA in their Group B opener last Monday.

But after the game, the footballer took to social media to reveal how his mother told him the news of his grandfather’s passing on Sunday night.

He posted on Twitter saying: ‘Yesterday was the toughest news I’ve ever had to face and that was listening to my mum tell me my grandad passed away last night. 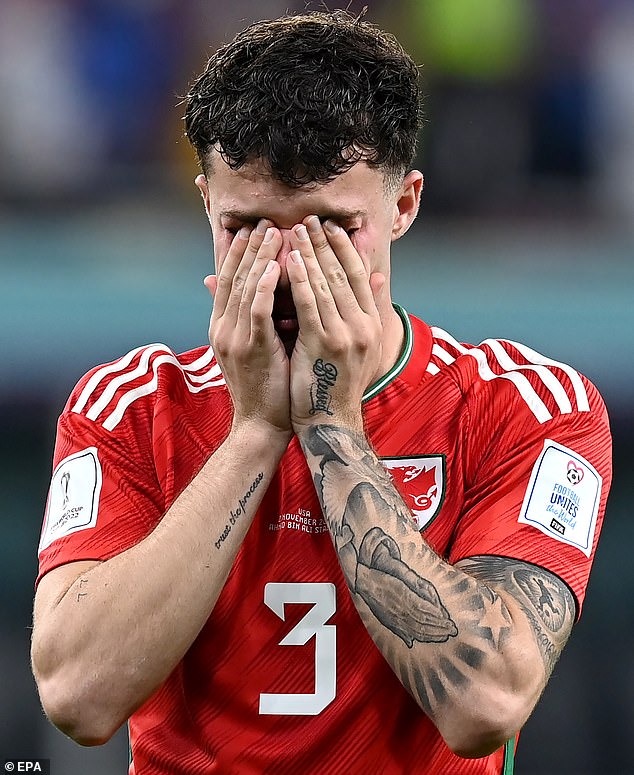 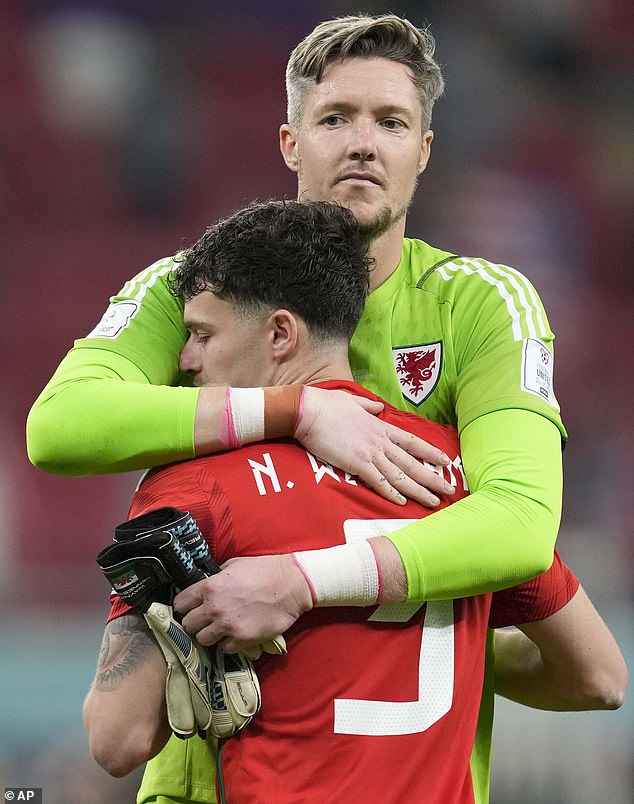 After a 1-1 draw against USA last Monday, a tearful Williams was comforted by team-mates

‘To go from crying all day to start in a World Cup game was extremely tough but I got through it from the support of my team mates and family,’ followed by a heart and dove emoji.

‘So I dedicate that game and an important point to him.’

The Nottingham Forest defender was visibly emotional at full time, walking around the pitch in tears as team-mates Dan James and Wayne Hennessey, among others, as well as manager Rob Page comforted him.

He then fell to his knees and pointed skywards in a heartwarming tribute to his Grandad.

Williams added on Instagram: ‘He’s been everywhere around the world to watch me play football from when I first started playing at Liverpool at six years old.

‘He’d never tell me if I had a good game because he always said I have to get better and better each day and that’s why I am where I am now! I know he’s up there watching down on me very proudly.

‘For everyone please cherish (what) you have with loved ones because you never know when it can get taken away from you.’

After an emotional and poignant day for Wales, who belted out a raucous national anthem before securing a well-deserved point against the Americans, he then mouthed to ITV cameras on the pitch: ‘That was for you Grandad.’

Williams previously spoke about the step up to first-team football and how it was something of an eye-opener – but he tried to treat it the same as playing for the youth team. 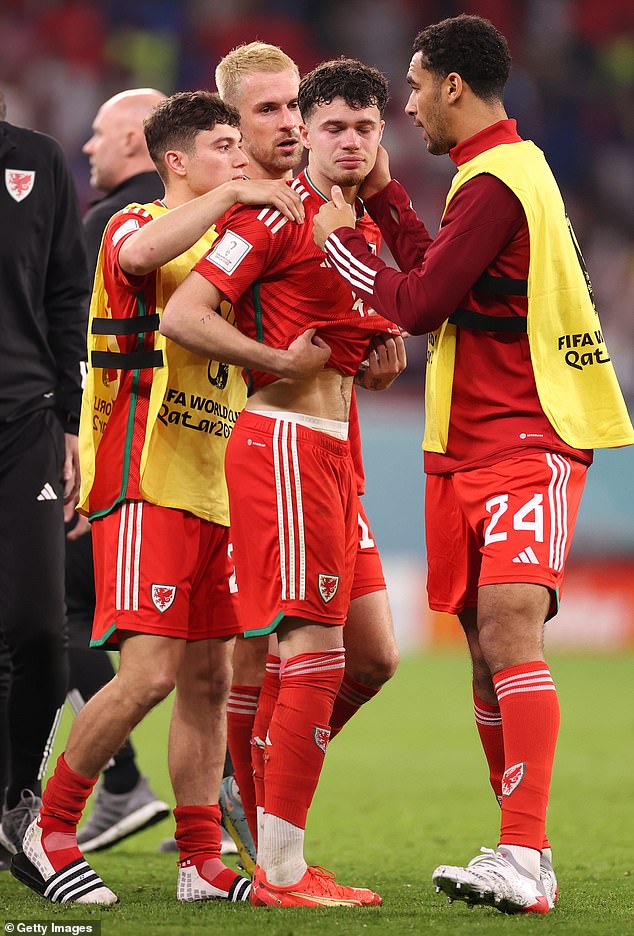 ‘There are a lot of differences, with the fans and the people watching. The way you play has got to be the same, whether it’s 23’s or first team, but the things around it are what makes it different,’ he said in 2019.

‘At the start, it can take some getting used to, but once you are two minutes into the game you forget about the fans and focus on the game. Well that’s what I try and do anyway.’

Where is Wales vs England being played?

The stadium has a capacity of 45,000 and was opened in 2003, before being rebuilt over a decade later so it could be modernised for the World Cup.

Wales are already familiar with the ground having played both of their group games there and it will also hold a match in the last 16.

Wales vs England will help see out the action in Group B – with both teams looking to seal a place in the last-16.

The game will start on Tuesday at 7pm GMT, 2pm EST in the USA and on Wednesday at 5am for Australian Eastern Time.

It will be aired live on BBC One and can be screened on BBC iPlayer for UK viewers. Welsh viewers will also be able to watch the game on S4C.

Wales will be without first choice keeper Wayne Hennessey through suspension following his red card against Iran and that will likely see Danny Ward replace him in goal.

Joe Allen overcame injury to feature against Iran and he does not look to have suffered any reoccurrence heading into the crunch clash.

England didn’t appear to suffer any knocks following their match with the United States but Gareth Southgate is expected to freshen up his side in their final group game.

Jordan Henderson is set to come in for Jude Bellingham, with Kyle Walker also expected to feature from the off. Phil Foden and Marcus Rashford are also pushing for starting roles.

This match will mark the 104th meeting between the teams but their first ever at the World Cup finals having met multiple times in the qualifying rounds over the years.

England have the upper hand over their British rivals having won 68 of their ties compared to Wales 14, and that includes the last five in a run stretching back to 1984, when they lost 1-0 at the now defunct Home Nations Championship.

England triumphed in their last competitive game that saw Daniel Sturridge score a last gasp winner in a 2-1 Euro 2016 group stage victory, while their most recent meeting in 2020 saw the Three Lions run out 3-0 winners at Wembley.