The Bachelor season 25 starring Matt James is off and running. (Really, he joked about taking his wife-wannabes on a half marathon route after night one.) While the 20-some 20-somethings didn’t change from stilettos to sneaks on command, they are turning heads and sparking connections with the leading man.

There are SO many of them at the moment, it can be difficult to match names to faces. One woman you definitely want to remember is Rachael Kirkconnell. The 24-year-old didn’t receive the first impression rose, but she and Matt absolutely hit it off. (His opening prayer really struck a chord for her, too.)

Here’s everything you need to know about Rachael Kirkconnell, an early Bachelor frontrunner, on and off the screen. (Btw, there’s a major spoiler about how far Rachael makes it on The Bachelor at the end, so scroll away if that’s your MO.)

Rachael is a Georgia peach. 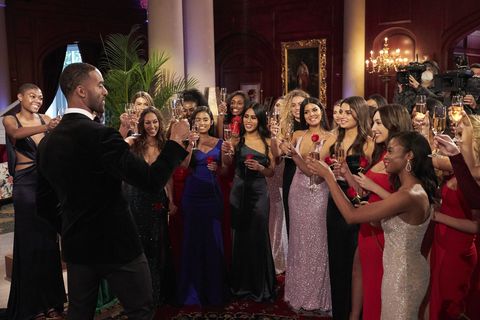 She works as a graphic designer.

Rachael graduated in 2019 from Georgia College & State University and is now a graphic designer. One of the ways she likes to spend her free time is doodling, per her bio. Any more deets about her design career aren’t clear.

Rachael is super close to her family.

Is anyone not these days on The Bachelor? She has a younger sister, who pops up on her feed on the reg, and the rest of her kin are “close-knit.”

She appears to be a foodie and vino lover.

Nothing makes her happier than “a good movie, good wine and charcuterie boards,” per her ABC bio. Rachael also seems to enjoy deep-dish pizza, sushi, and a whole bunch of other ‘grammable foods.

Rachael frequents wine bars with her pals and explores vineyards, according to multiple Instagram posts.

Rachael is a musical festival fan.

There’s no Stagecoach to be found on her feed, thank goodness. It’s all Hangout Festival with her girlfriends. Her fave bands are unclear, but she definitely knows her angles for snapping the perfect photos to document her Hangout Festival experiences year after year.

Here she is lounging in the sand near the stage.

And a more recent pose with the ubiquitous Ferris wheel background. Her caption reads: “still recovering, still love you @hangoutfest”

She’s all about a beachy, island vacay.

Yes, Rachael has posted from city trips across the country, but she keeps going back to the U.S. Virgin Island St. John for all the bikini time.

Rachael jokes about enjoying “honeymoon beach” solo. She captioned a swimming selfie: “honeymoon for one.”

And, Rachael has never been in love.

She calls herself a “hopeless romantic to her core,” but her ABC bio reveals she’s “never been in love and believes that Matt may just be the guy to change that.” No presh.

“At the end of the day, love is what makes your life more special than others,” she shared on her ABC bio. “Life can be hard and really difficult and dark at times, but if you have someone by your side that loves you more than they love themselves, that makes it all worth it in the end.”

This is not a Champagne-gate reprise. Rachael has been accused of bullying in her past. Reality Steve shared one of the posts he’s calling “TikTok-gate” in which a former classmate of Rachael’s shared bullying allegations. The series of TikTok videos debuted on premiere night, but they came without evidence to back up the claims.