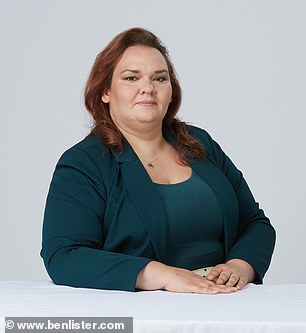 Ruby, 29, (pictured) has been single for ten years

Someone fun with a physique that’s between slim and a dad bod. My celebrity crush is Chris Hemsworth. I can dream!

LIKED? Easy to talk to.

REGRETS? Ordering too much.

COFFEE OR CAB? Coffee and cocktails.

I was in a five-year relationship that ended in 2012. I’ve had some occasional flings since then, but nothing Earth-shattering. I’ve done the whole online dating thing but I find it quite shallow.

There were some nerves but I was excited, too. I wore a spotty skirt and a turquoise top and blazer.

We met at the hostess stand and I instantly thought he was attractive. I liked his height — I don’t tend to go for shorter guys.

He was very much my type. It felt comfortable with no awkwardness.

Yes. We had the table for two hours but stayed for three. The waiter had to come over three times to take our order — we were talking so much we hadn’t studied the menu.

We both like to travel so we chatted about our holidays and he was interested in the fact that I’m a Scout leader, as he was a Scout when he was younger. He’s passionate about his life-coaching business and I enjoyed hearing about that.

He’s vegan and, although I’m not, I was happy to order a vegan meal as I wouldn’t have felt comfortable eating a steak in front of him.

We ordered too much food and got a bit tiddly on cocktails, but it was fun.

I’m not embarrassed by much. I did drop some food down my bra but I didn’t really care.

At times I felt we were flirting but I got a slight impression that he wasn’t looking for romance. Maybe it was me not wanting to get my hopes up. We shared a car home, so we had another hour to chat away and learn more about each other.

I was dropped off first, and I think he might have been hinting that he wanted to be invited in as he told me he was thirsty, but I left him to take the car on. I’ve only been on three other formal dates so I’m not sure how these things should go!

We exchanged numbers and have been in touch. If he had leaned in for a kiss I would have responded but I didn’t want to be presumptuous.

Yes. But only romantically — I’m not interested in gaining a friend.

He said he wanted to see me again, so who knows? It occurred to me that we hadn’t paid each other any compliments. I have a bad habit of falling hard and fast for someone so I’m trying to keep that under control. The ball is in his court.

Absolutely. Musa is so friendly.

A nurturer who enjoys life’s blessings. I’m not attracted to people who aren’t progressive or open to learning.

COFFEE OR CAB? Coffee, no romance.

I’ve had two relationships that lasted more than two years. My most recent relationship was a year long. I’ve never been on a blind date, but have done some online dating in the past.

I was curious, not nervous. I like looking smart so I wore check trousers and a matching turtleneck top. I think it’s respectful to your date to make an effort.

I arrived a little early, but as I was asking for the table, Ruby turned up. I didn’t know what to expect, and there’s no particular type I go for, but I didn’t feel an initial attraction. I thought she looked really smart, though.

We were shown to our seats and then started to introduce ourselves, and we really hit it off in terms of conversation.

We had so much to talk about, they almost had to kick us out the restaurant in the end. We have a lot in common but I was really interested in the fact that she is a Scout leader. I moved to the UK in 2002 and had been a Scout back in Kenya, so I enjoyed chatting about her experiences.

I never felt we had to force anything. We went over-budget on food and cocktails and some rum shots, but it was all so enjoyable that we didn’t mind.

When I was eating my starter, I accidentally spat some out, but it was funny.

I wouldn’t say there was any flirting — it was just natural, flowing conversation.

We had more time to chat in the car and I complimented her and told her I thought she was great company.

I didn’t give her a kiss or hug goodbye but I did take her number and she texted to make sure I got home OK.

I don’t think we had a romantic connection but I really enjoyed her company and would happily meet again to chat more.

I’m easy to get on with so I’d say she enjoyed the conversation and the date. I don’t know if she fancied me — that wasn’t really the vibe of the night.

She would get on with most people as she’s a lovely and respectful woman, so yes.