This is a story about the parents of courageous Christine Blasey Ford and screaming Brett Kavanaugh, whose classmates are deserting him in droves. If you are a parent of teenagers, this story should make you very anxious, especially if you aren’t that way already. And I’m writing this just as you are sending off your kids to their school formals and end-of-year parties.

This is about parental responsibility, because that’s what happens when you have children; elephants on your shoulders for eternity. This is also a story for parents, because, God willing, what happened to these two children will never happen to yours. Not just God(s) willing. You must be willing too. There are ways you can protect them, but those ways are hard and you will be unpopular. That’s probably a very good lesson to learn before you need to know it; before your children are defending their honour on the public stage.

We are not – really – all there when we are teenagers; we are a blaze of hormones and inexperience.

That is not some generalization. Just look at the work of the Australian Institute of Family Studies in a study of adolescent antisocial acts in Victoria published in 2002. It revealed one in 10 participants had been in contact with the police for offending; over 40 per cent of 17 to 18 year olds had “skipped school”, and alcohol and cigarette use were so common as to appear normal. Socially undesirable – and officially illegal for most in the study. Adolescents, wrote noted psychiatrist Ronald Dahl in 2004, “often appear to be relatively good at making decisions under conditions of low arousal and cool emotions”. Which is not what they are at parties. They are aroused, drunk and torrid.

Whatever you may think about the relationship between alcohol and sexual assault, let’s all agree sexual assault is not acceptable. Let us also agree that alcohol makes you lose your mind. You become a risk-taker. On this occasion, you might not be a rapist or abuser. Instead, you might walk on the road into oncoming traffic. You might get behind the wheel of a car without a licence. You might throw a punch or hurl a broken bottle into the face of your best friend. Michael Carr-Gregg, author, psychologist and parenting expert, says that dealing with adolescents in party mode is pretty tough – add alcohol and risk-taking soars.

“You are dealing with an immature developing frontal cortex and the capacity to assess risk is diminished,” he says.

But wait, there’s more to worry about. It’s not just your influence as a parent (which is huge), it’s also the influence of their friends.

“Their desire to conform and be one of the tribe is overwhelming. Common sense dissolves in alcohol,” Carr-Gregg says. So, if you know your kid’s best friend is a drinker, you might do well to always have that friend at your house, where you can keep an eye on what’s happening.

So, how can we protect our teenagers?

The biggest site of risk for young people is parties, and in Australia we are heading into peak party. Zero point in forbidding parties – but there have to be rules in place, for them and for you.

Parents should be present at parties. There should be an actual guest list and parental involvement during the evening. Where parts of the house are blocked off. And by parts of the house, I mean bedrooms, unless it is the parental bedroom and someone is sitting in there in charge of bags and coats. One bathroom with a queue, one person in there at a time. Everything else barred and blocked. Register your party with police (Queensland, NSW, Victoria, Western Australia, Tasmania, the ACT, Northern Territory, South Australia) and under no circumstances advertise the night on public social media. 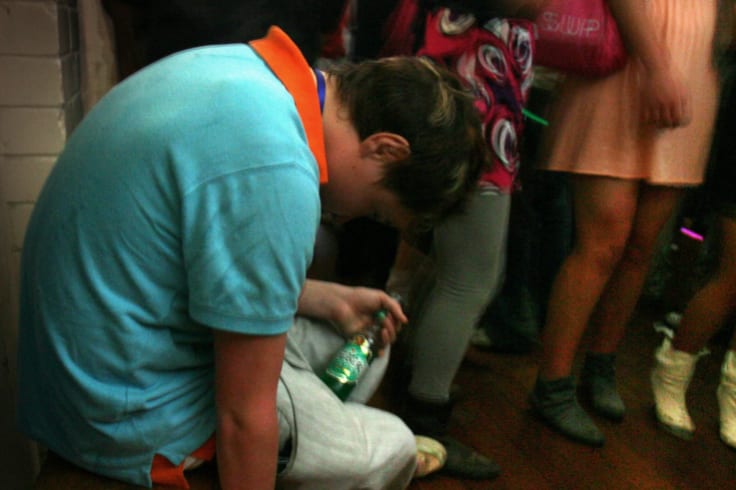 Studies show underage drinking is so common as to appear normal.

If it's not at your house, check with the parents. Offer to come and keep them company in their hours of need.

If this is at your house, don’t retire to your bedroom, you giant wimp. Be out there. Make pizza. Make more pizza. Make sticky chicken wings. Ice cream cones. Make so much food that there is no time for them to drink. Take food around a lot. Make fabulous punch with lots of sugar and fizz and be in charge of that all the time. Keep tasting the punch. If it's making you feel like you are pissed, chances are someone has poured in the bottle of vodka I'm about to tell you about.

If you have under 18s in the house, it is an offence to supply them alcohol. That does not mean you will be able to prevent drinking because there are plenty of parents who think it’s hilarious to give their kids a bottle of vodka to smuggle in to a party; and sadly it’s inappropriate to pat down every partygoer as they arrive at your house. Although I would have liked to be able to do that.

After one horrific party at our house, we decided we would hire a security guard. Best decision we ever made. Somehow Stanley could just tell if a kid was carrying contraband. He was also utterly amazing when a young girl passed out in our front yard not long after she’d arrived, knew exactly what to do to keep her safe and how to find her mother. Apparently all teenagers have their mothers under M in their phones. That particular M didn’t want to pick up her daughter until I threatened to call the police.

But what if that girl had been inside in the bedroom with a boy who was a rapist? I would not have known. No one would have known. And it’s possible she wouldn’t have known either, just a dim memory of pain and anguish, maybe some physical evidence of blood or bruises.

Talk to your kids about risks, about drinking, about drugs. Talk, talk, talk, talk. No fake threats. Talk about your fears for their future. Remind them of Christine Blasey Ford and Brett Kavanaugh and they will roll their eyes endlessly. Bad bloody luck.

What happened to Christine Blasey Ford when she was 15 happens to young girls every single day. What Brett Kavanaugh is alleged to have done is something young boys do every day. Every single day. And it usually happens in someone’s house. Maybe right after the formal. Maybe in your house.

But you should know. You are the grown-up. Take charge and take care.

Jenna Price is an academic at the University of Technology Sydney and a Canberra Times columnist.