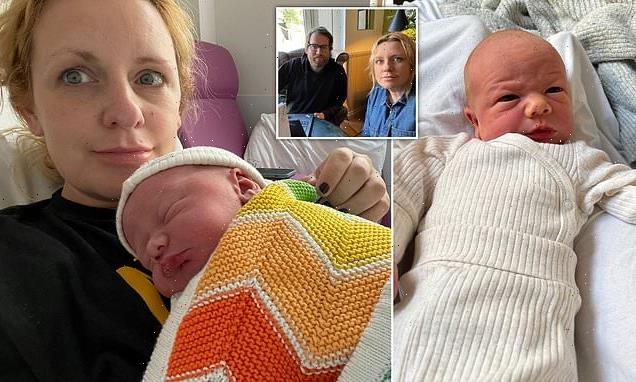 Mother, 43, reveals she thought her husband had cheated on her after nurses mistakenly diagnosed their newborn’s bacterial infection as gonorrhoea

A woman was shocked when told that her loyal husband may have cheated on her after their newborn was mistakenly diagnosed with an STI.

Jenna Barnes, 43, from Manchester, took her son Fletcher to the hospital when his eyes became ‘gunky and stuck together’.

She claims a midwife told her that the baby had tested positive for gonorrhoea – a sexually transmitted disease which can also affect infants – when in reality he just had a bacterial infection.

The mother-of-five says she was told it would have been passed on by a parent before their son was born – leading her to believe her husband, Chris, 45, the frontman for a tribute rock band, had been unfaithful. 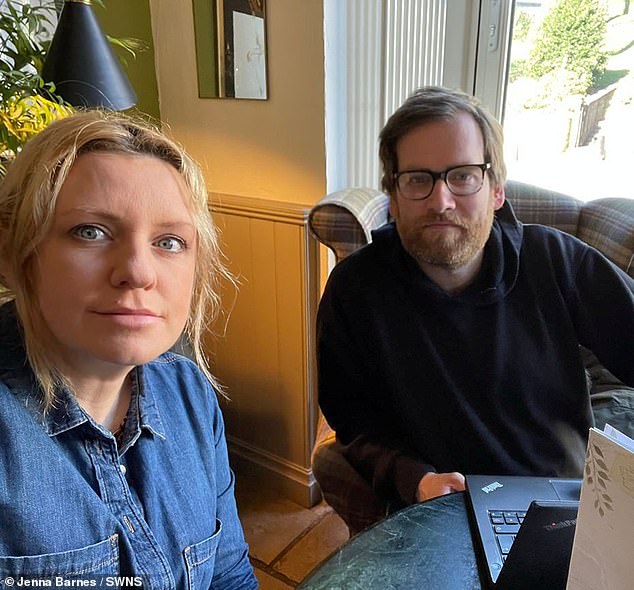 Jenna Barnes, 43, from Manchester, was shocked when told that her loyal husband Chris, 45, may have cheated on her after their newborn was mistakenly diagnosed with an STI. Pictured, Jenna and Chris Barnes 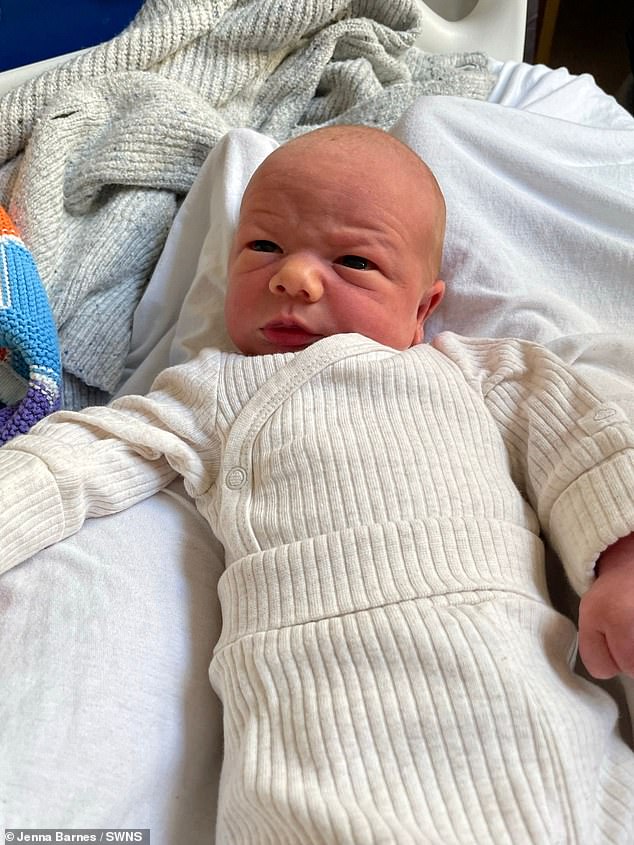 Jenna, 43, took her son Fletcher (pictured) to the hospital when his eyes became ‘gunky and stuck together’

Knowing she wouldn’t have contracted gonorrhoea from anyone else, Jenna, a lingerie and costume designer from Manchester, confronted her partner – who insisted he hadn’t strayed either.

The whole family was relieved when a midwife revealed she had given Jenna the wrong results, confirming their one-month-old did not have gonorrhoea.

Fletcher – who actually had a bacterial infection – was treated with antibiotics and eye drops.

The midwife was very apologetic for mistakenly reading out positive instead of negative and Jenna says she and Chris can laugh about the blunder now. 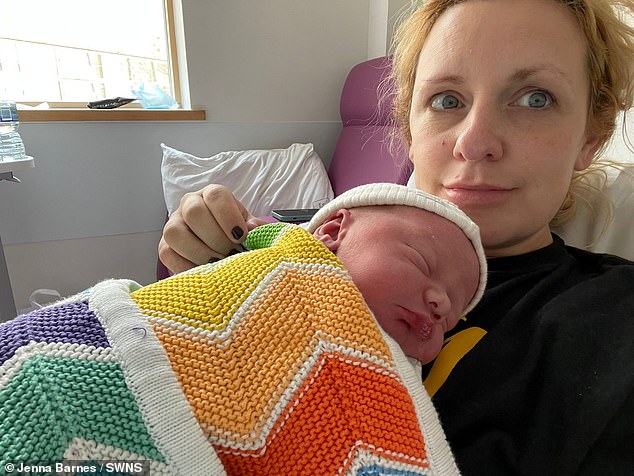 Jenna (pictured with Fletcher) revealed that while she has ‘complete trust’ in her marriage, ‘when a medical professional tells you have tested positive for an STI, you don’t question it’

‘I was gobsmacked when she told me – I was lost for words,’ she said. ‘I instantly started Googling the illness and knew having sex was the only way of contracting the disease.

‘Chris and I were relieved when we discovered it was an honest mistake, but in our heart of hearts we knew it was wrong.’

Jenna revealed that while she has ‘complete trust’ in her marriage, ‘when a medical professional tells you have tested positive for an STI, you don’t question it’.

Luckily, Jenna already had a meeting with the same midwife later the day so it was only a few hours before she could get confirmation. 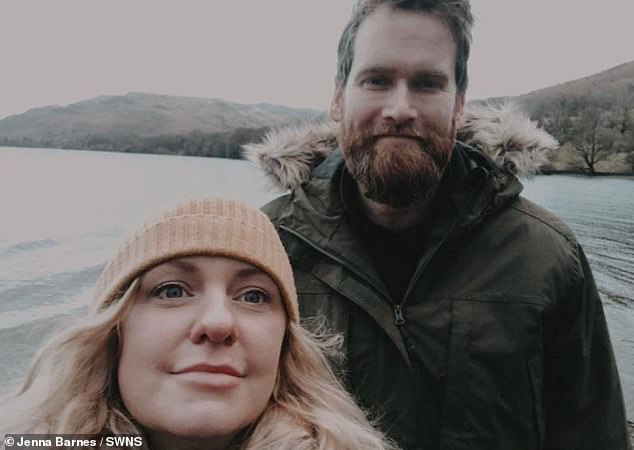 Jenna started worrying Chris would think she had been unfaithful when she spent nine weeks working at Pinewood Studios, Slough, Berkshire, before becoming pregnant with Fletcher in December 2021 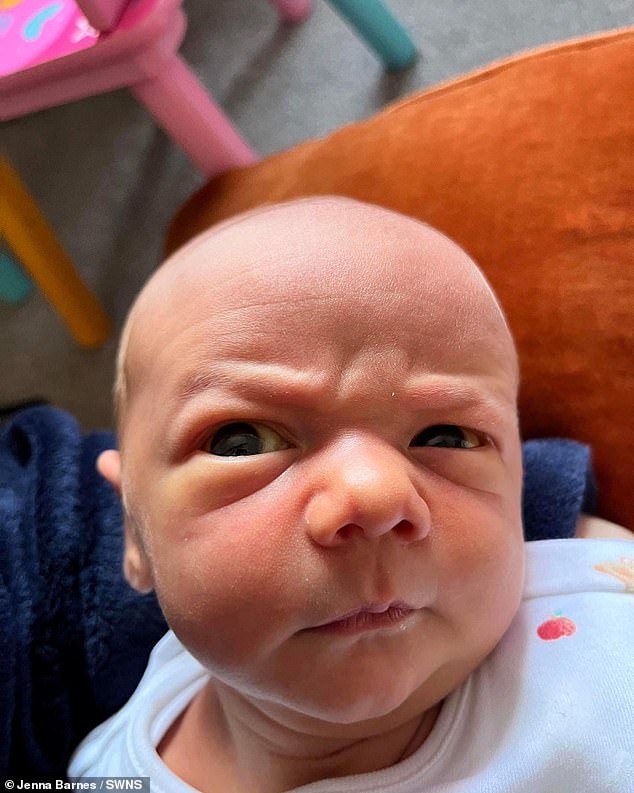 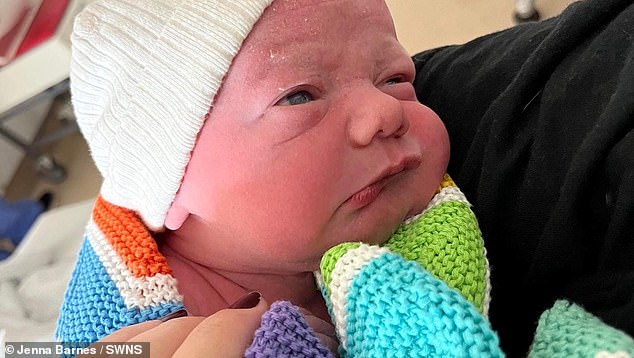 The mother admitted while she was ‘relieved’ by the news for herself and her husband, she was most pleased about the baby

Jenna’s husband, Chris, was on tour in Canada at the time of his baby’s birth, and claims he is ‘admittedly the most boring man in rock ‘n’ roll’

‘I’m a vegetarian, I barely drink, and I don’t smoke,’ he said. ‘I was going to the toilet on the tour bus, it must have been about 3am and I got a text from Jenna saying: “Why have I got the clap?”‘

WHAT ARE THE SYMPTOMS OF GONORRHOEA?

More than 35,000 people a year are infected with gonorrhoea in England, including record numbers of baby boomers. Only chlamydia and genital warts are more prevalent.

Symptoms usually strike within two weeks of infection – but can stay hidden for many months.

In women, symptoms of gonorrhoea can include:

In men, symptoms of gonorrhoea can include:

He revealed the pair spoke on the phone, wondering how the situation could have happened, but insists he ‘never doubted Jenna’s innocence’.

‘I was worried she would think I had been out liaising with the ladies, but everyone who knows me knows it’s not in my nature,’ he added.

Jenna also said that up until the scare, she had never doubted her husband’s loyalty despite constantly being asked about what it’s like to ‘cope’ with his band lifestyle.

After revealing the diagnosis on the phone, she said Chris responded: “How the f**k has that happened? I know you’ve not done anything, you’re at home with five kids.”‘

Even their son, George, 13, said: ‘You know dad would never cheat, he won’t even go to a strip club.’

‘Chris is more into tea and slippers than coke and strippers,’ Jenna added.

Jenna started worrying Chris would think she had been unfaithful when she spent nine weeks working at Pinewood Studios, Slough, Berkshire, before becoming pregnant with Fletcher in December 2021.

She even pleaded with her rocker husband and said: ‘Look if you have been unfaithful, I don’t mind, I just need to know the truth.’

Jenna insisted that ‘as soul mates I’d like to think we would work through infidelity together’.

The mother admitted while she was ‘relieved’ by the news for herself and her husband, she was most pleased about the baby.

‘I was so worried because I had read online gonorrhoea can cause blindness,’ she explained. ‘I’m such a chilled out person so the midwife was lucky she had done it to me and not somebody else’.

Chris said once the issue had been resolved, everyone on tour laughed because it happened to the one member ‘who is up first and in bed first’.

‘We saw the funny side of it and bang our drums for the NHS – they’re only human and everyone makes mistakes,’ he added.

‘This was a case of human error.

‘We are glad mother and infant are both thriving and send them our best wishes for the future.’