Home » Lifestyle » With so few left to sing to, the regent honeyeater is losing its song 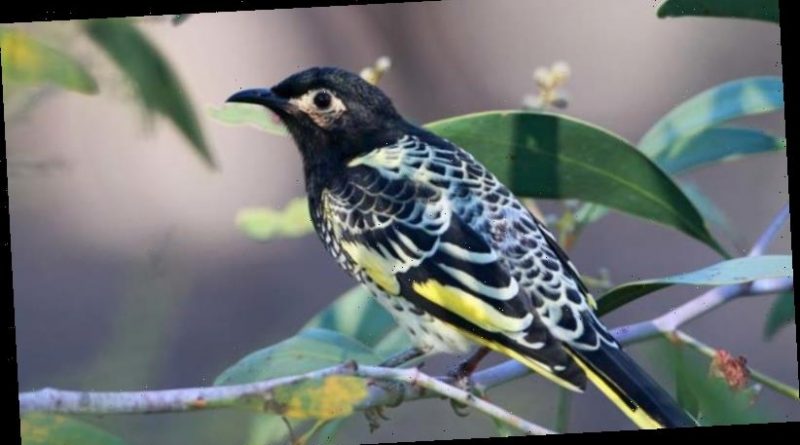 When Michael Alfa was setting up to photograph wildlife at Woolgoolga’s sewage works near the northern NSW town of Coffs Harbour last year, the avid birdwatcher could hardly believe his senses.

There, among the warbling wattlebirds hanging off a coastal banksia tree, was a lone, critically endangered regent honeyeater, distinctive in its yellow and black plumage. But not its birdsong. 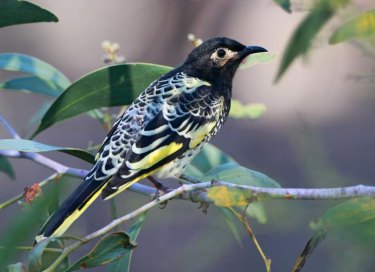 A rare sighting of the critically endangered regent honeyeater. Its birdsong may become even rarer, though, as new research show some of the birds are singing a shorter version and even starting to mimic other birds, putting their future at even greater risk.Credit:Dean Ingwersen, Birds Australia

“It was making the exact same song [as the wattlebirds]. If you hadn’t seen it, you wouldn’t know it was a regent honeyeater,” Mr Alfa said. “It was just incredible.”

The species, not known for its mimicry, turns out to be picking up songs of other birds too, including the noisy friarbird, eastern rosella and the spiny-cheeked honeyeater, according to world-first research published Wednesday in the journal, Proceedings of The Royal Society B.

The widespread loss of habitat means the regent honeyeater has been reduced to its last 200-400 individuals spread over 300,000 square kilometres ranging from Queensland to Victoria. The birds are apparently changing their birdsong. In some cases, they are forgetting their song entirely and instead adopting the calls of other species, the researchers found.

Citizen scientists recorded male regent honeyeaters across their range during a four-year period from 2015-2019. Researchers then compared them with recordings assembled for the Atlas of Living Australia between 1986-2011.

Ross Crates, a scientist at ANU’s Difficult Bird Research Group and the paper’s lead author, said language was important to humans and other species such as whales. The loss of such culture for regent honeyeaters was associated with reduced “individual fitness” for breeding as females failed to recognise males singing atypical songs.

“If it sings an unusual song or it sounds like a different bird, there’s less probability it’ll be matched [to a female],” Dr Crates said, adding the findings were “really quite alarming”. 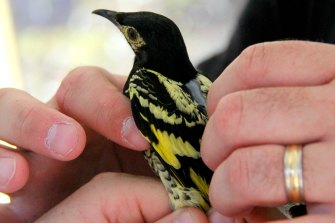 A regent honeyeater bred for release by Taronga Zoo. Captive birds have an extra challenge finding mates – their story may differ from their wild counterparts.Credit:Taronga Zoo

Some 18 males, or about 12 per cent of the total population, were only able to copy the songs of other bird species, Dejan Stojanovic, a co-author of the paper said.

“This lack of ability to communicate with their own species is unprecedented in a wild animal,” Dr Stojanovic said. “We can assume that regent honeyeaters are now so rare that some young males never find an older male teacher.”

Regent honeyeaters hitting their verbal groove produce “a highly distinctive song, consisting of a sub-chatter building to a crescendo of a guttural warble produced with characteristic head-bobbing”, the paper said.

“One possible explanation for this is that, as a result of low population density, a copying error by one individual was learned by other individuals who lacked alternative tutors in the vicinity,” the paper said.

The paper said that while it remained an open question whether the loss of song was contributing to the ongoing decline in regent honeyeater numbers, the findings suggest “the loss of culture may be a precursor to extinction” as populations dwindle.

“There’s a threshold that, once crossed … is very hard to bring a species back from,” Dr Crates said.

As birdsong originated in Australia, there’s “a sad irony that is the place where it’s starting to be lost”, he said. “As populations decline globally, we’ll find more examples of this happening if people look hard enough.”

The research also indicates captive breeding programs, such as at Sydney’s Taronga Zoo, are producing birds that are off-song. To increase the chances that released regents will find mates across their vast range, zoo breeders may need to play song recordings matching those in the wild.

Her volunteers have planted some 150,000 trees such as ironbarks and yellow boxes favoured by regent honeyeaters in her region of the Blue Mountains over the past two decades. They may need to fit speakers in the trees playing appropriate birdsongs to help juveniles learn, she said.

For Mr Alfa, the glimpse of a rare regent honeyeater in northern NSW remains a special memory, even with its discordant song.

“It could be the last one I ever see,” he said.