Mother, 40, who was told she wouldn’t live more than three years after being diagnosed with breast cancer while pregnant celebrates the all-clear with photo montage showing her with her daughter, 7, growing up

A mother who spent eight-years receiving cancer treatment after being diagnosed while pregnant has celebrated being given the all clear with three similar photos taken with her daughter.

Roisin Pelan, 40, from Preston, Lancashire, was told she had breast cancer while 34 weeks pregnant with her first baby.

The online business owner had to have a mastectomy just six days after her daughter Ivy was born and fought to kick the cancer with intense chemotherapy.

Despite the cancer going away after a year, it returned again in 2018 and doctors warned her she wouldn’t live past three years – but incredibly, Roisin got the all-clear again in February this year. 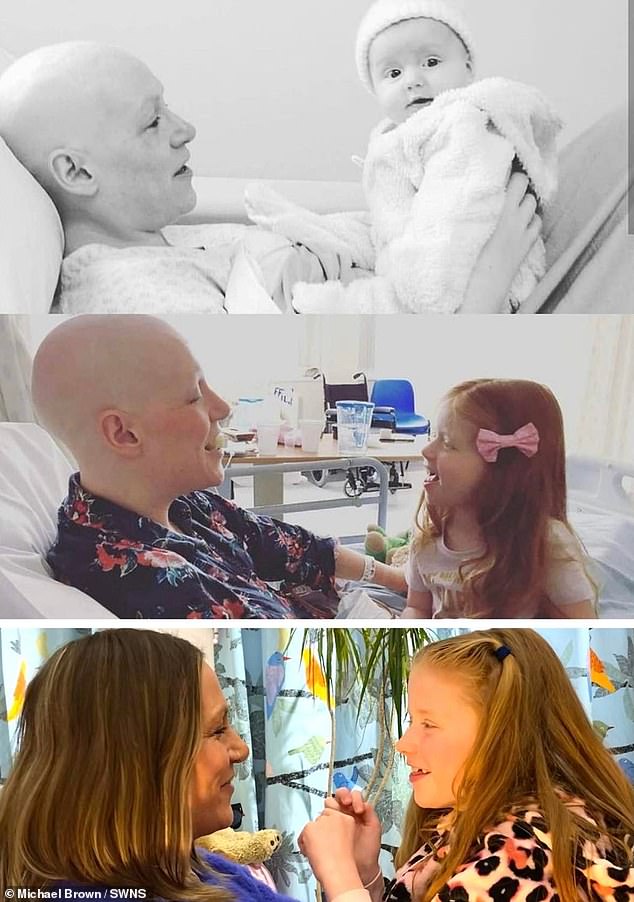 Roisin Pelan, 40, from Preston, Lancashire, has shared three moving photos with her daughter Ivy taken throughout her cancer journey on Facebook. Top to bottom: 2014, 2018, 2022 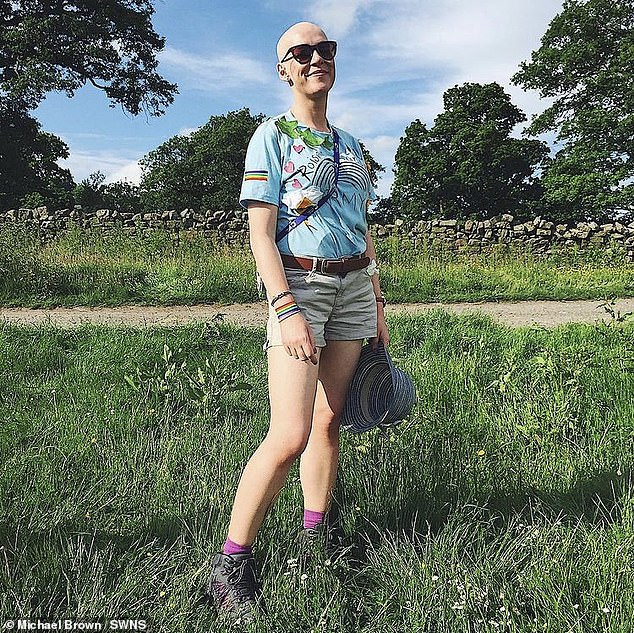 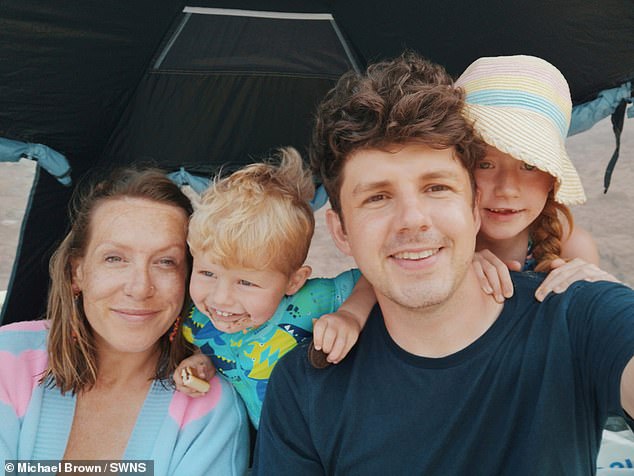 Since being given the all clear in February 2022, Roisin is awaiting marriage to Michael Brown, 37 and has become a mother of two after adopting a son (pictured)

Now a mum-of-two and awaiting her wedding to partner Michael Brown, 37, Roisin told how her daughter, born days before her diagnosis has never known a life before her mother’s cancer.

Roisin took to Facebook to celebrate her clear scan with a moving post showing three identical snaps of she and her daughter throughout the eight-year cancer journey.

Roisin said: ‘These past eight years have without a doubt been the most difficult years of my entire life, but also some of the best.

‘Dealing with your mental health is the hardest part – trying to believe you have a future when it feels like you don’t. 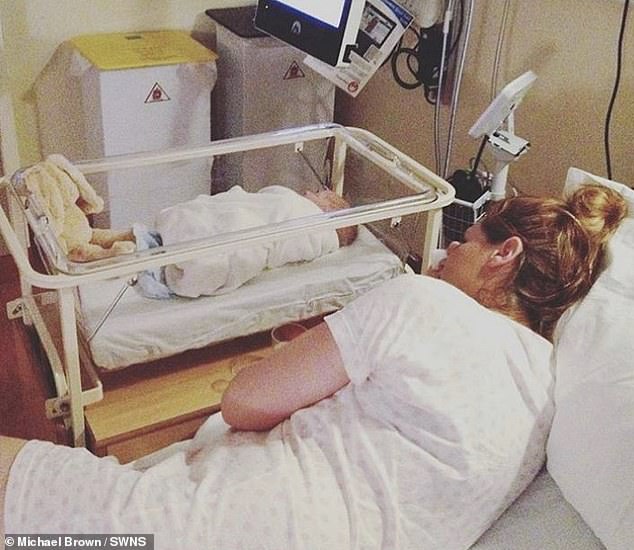 Roisin said trying to believe she has a future and dealing with her mental health was the ‘hardest part’ of her eight-year cancer battle. Pictured: Roisin in hospital with new born Ivy 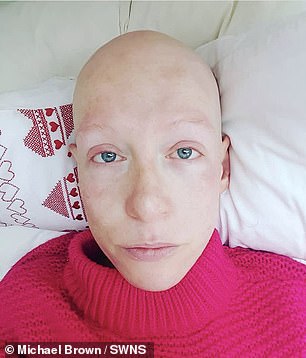 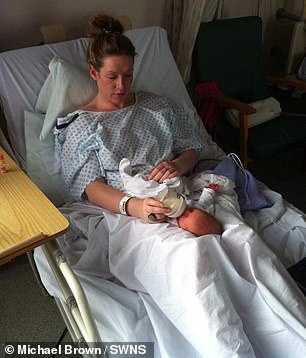 Roisin first noticed a lump in her left breast in May 2014 while moisturising her skin to avoid stretch marks. Pictured left: Roisin with Ivy in hospital

What are the symptoms of breast cancer?

According to the NHS, 1 in 8 women are diagnosed with breast cancer during their lifetime.

Women are advised to visit their GP if they experience:

The exact cause of breast cancer is not fully understood, however: age, family history, obesity, drinking alcohol and a previous benign breast lump could be a factor.

If cancer is detected at an early stage, it can be treated before it spreads to other parts of the body.

‘Cancer is all my daughter, and later my son, have ever known. But having a cancer diagnosis twice really makes you want to live your life.

‘We’re only here once and I have been given second and third chances.’

Roisin first noticed a lump in her left breast in May 2014 while moisturising to help to avoid stretch marks during her 34th week of pregnancy.

She visited a doctor to check out the olive-sized lump, where an ultrasound and biopsy revealed she had breast cancer.

She and now-fiancé Michael were given options and chose to induce an early birth of their daughter, who they named Ivy, before having a mastectomy.

Just six days later, on June 6, Roisin had the procedure followed by six months of chemo. She juggled the gruelling process alongside raising her baby daughter.

The year of her diagnosis she had a photo taken with baby Ivy – which would later become an emotional reminder of her lengthy cancer journey.

The new family were thrilled to get a clear scan in January 2015, and began the process of applying to adopt their second child.

They believed a second pregnancy would risk bringing the cancer back due to the hormones and in November 2017 they were finally approved to adopt.

They planned to begin the matching process in January of 2018, but at that point, things went downhill.

Roisin said: ‘Days before I would have been celebrating three years in remission, I found another lump.

‘I had been talking to someone and I just felt it, and my stomach lurched. 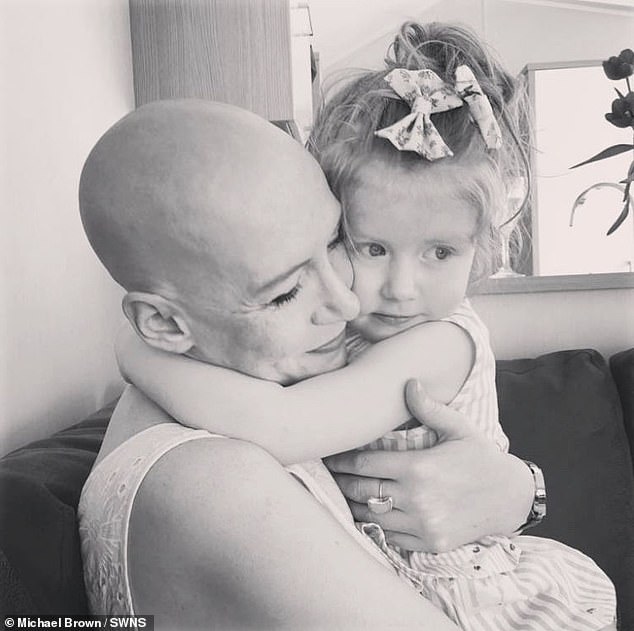 Roisin had a mastectomy just six days after giving birth, then juggled six months of chemo with raising her daughter (pictured in 2014) 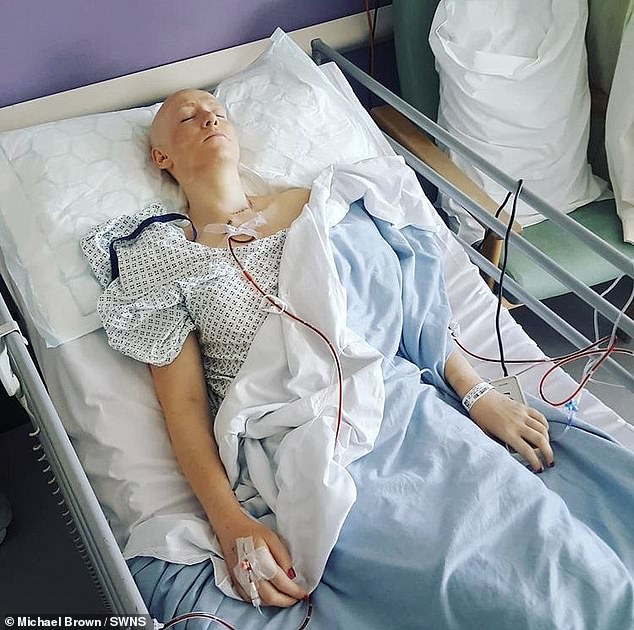 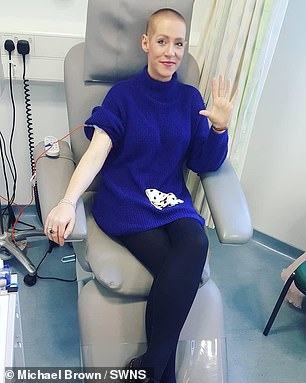 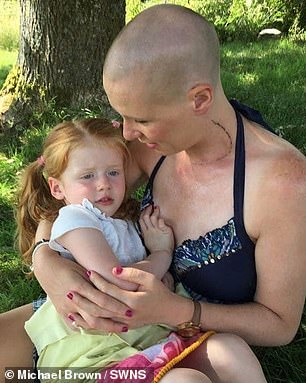 ‘I knew straight away the cancer had come back. When I went for a scan which confirmed it, couldn’t even look at Ivy.

‘I didn’t know what I was about to put her through – usually when you have a recurrence, it comes back in the later stages.’

A week later Roisin was back in the chemo chair and was horrified as doctors told her it had spread beyond the original area, although not to another organ.

They warned her she would likely have just three years to live, and there would be little chance of surgery. 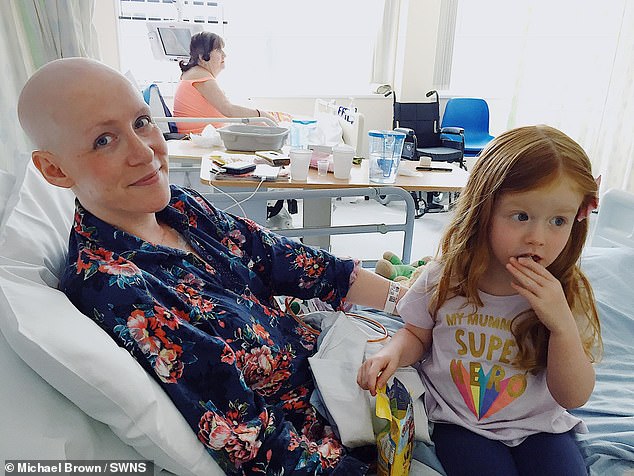 Roisin went to a different hospital for a second opinion, where doctors agreed to continue with aggressive chemo and radiotherapy. Pictured: Roisin and Ivy in 2018

She said: ‘I walked out without an ounce of hope I would live. I thought I was dying, and that was it.’

But after going to a different hospital for a second opinion, different doctors agreed to continue with aggressive chemo and radiotherapy to eradicate the cancer a second time.

By 2019, she had a clear scan once more and was able to adopt her son at nine months old – and he and Ivy quickly became the best of friends.

Three years later Roisin has proven the doctors wrong by outliving their three year prediction – which she celebrated with a third identical photo with Ivy, who is almost eight. 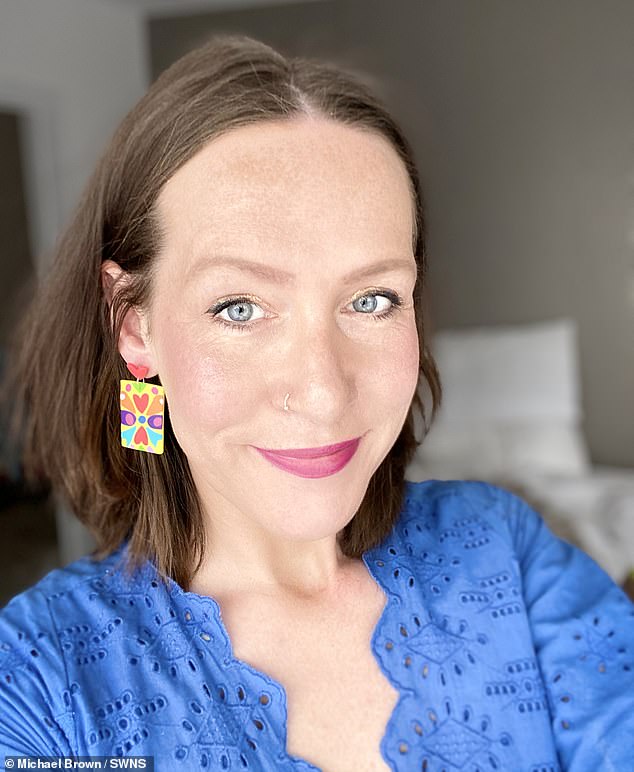 Roisin had a clear scan again by 2019 and was able to adopt her nine-months-old son, who became best of friends with Ivy 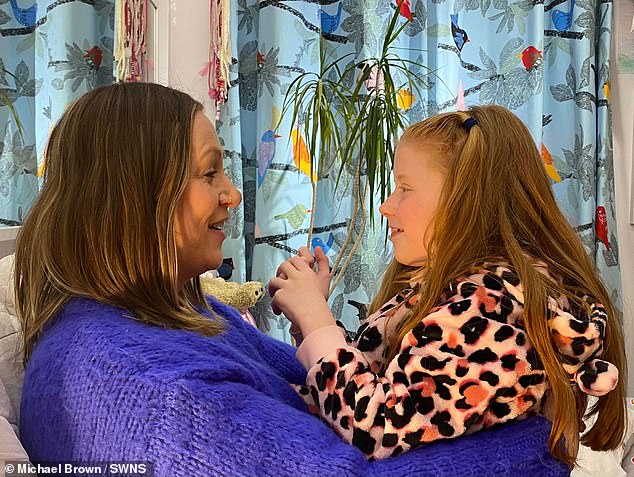 Roisin said at seven years old, Ivy shouldn’t know words like chemotherapy and what a CT and MRI scan are but she will be on chemo forever

While the first two photos from her cancer journey show her with no hair due to chemo, in this year’s photo she wears the biggest smile as she sports a full head of hair.

The trio of pictures serve as a reminder of how far she has come and the journey Ivy has been on alongside her from the very beginning.

She said: ‘Ivy knows words like chemotherapy, and she knows what CT and MRI scans are.

‘At seven years old, she shouldn’t know these things.

‘I will be on chemo forever but it’s just become our life now – it’s keeping me alive.

‘These past eight years have without a doubt been the most difficult years of my entire life, but also some of the best.’