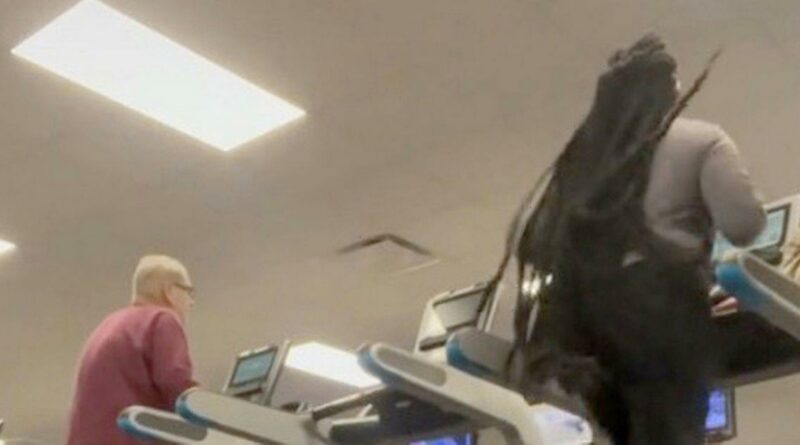 A woman confronted a gym-goer after realising he had made a joke about her long braided hair, saying it "could be used as a mop".

On TikTok, Christina Abiola claimed a pensioner made the comment when they were both doing exercises on the treadmill.

She shared a footage she took a day before the insult and wrote: "One day before this man said my hair could be used as a good mop!

"I didn't even add the dots until this minute but wow! No one can steal my joy, not today!"

The clip shows her lengthy locks bouncing up and down while she is running on the treadmill.

Christina later shared an audio clip of the confrontation – which followed after she asked her partner to have a chat with the elderly man.

"I’m not good with confrontation, but he wasn’t getting by free. He was nervous when Lamar pulled up to him!" she said.

Her husband can be heard saying: "I come to have a conversation with you today because you made a comment about my wife, about her hair."

And the OAP replies: "Oh that's her hair? I thought it was those extensions."

Lamar then explained that Christina could have taken the comment the wrong way, adding: "She feels very upset about it".

And the pensioner was quick to make a grovelling apology.

He responded: "I didn't mean to offend her, I just thought it looks nice. Yeah the mop comment – that was my first impression but I think it's nice."

Many viewers agreed with Christina, with one saying: "How does a mop equal to 'looking nice'?"

Another wrote: "It doesn't matter what you mean, it's what you said!"

"When my hair was long and straight, people would say the same, I think it's a reference to the length but not the style, not justifying, just a possibility," a viewer explained.