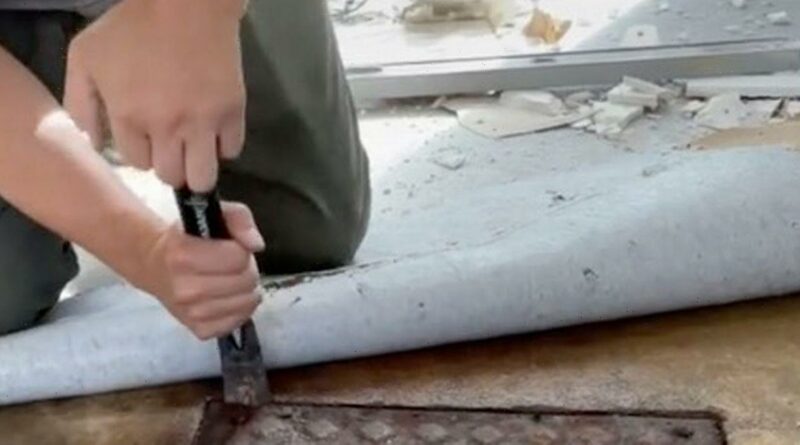 A woman was horrified after investigating a "fart" smell in her 500-year-old home and making a pretty grim discovery.

In the clip, TikTok user @candyrainsalon shows herself and her partner lifting up a carpet in their 16th-century mill.

"What have we found under the carpet in the house we are renovating?" she asks in the on-screen caption.

As the knackered grey carpet is lifted up, the couple – who claim to have not had a survey done on the property – come face to face with a secret manhole they didn't know existed.

Even worse, it is pretty damp and when they open it up they realise it is a "poo pipe", as the TikToker calls it.

"Oh my goodness!" she says as the news sinks in.

"We had poos just floating beneath us, accusing each other of farting every night," she jokes.

Since the video was uploaded on Wednesday (August 18) it has been watched more than 2 million times and people were amazed and a little grossed out.

One user joked: "Put some glass over it, put a couple of LED lights in it, and use it as a feature."

A second viewer commented: "Wow! As if somebody just covered it with carpet!"

"What the hell. I'd move," blasted a third user, with many others echoing the sentiment.

Someone else shared: "I discovered one in the passageway of my old house and called Environmental Health.

"Apparently, it's fine to have in your house and lots of old houses have them."

"This used to be allowed back in the day but with a total sealed lid you would never be allowed these days ever," another person said.

The couple's unique home was a water mill later converted into offices so it has a number of quirks, including three urinals in one of the bathrooms and glass dividing walls.

It's no easy task to renovate the old building and they have been sharing the whole experience on TikTok.