Home » Lifestyle » Woman reveals the realities of being a professional mermaid

My life as a professional mermaid: Woman, 19, reveals what it’s like to spend her working days underwater – from wearing seven-kilogram weights to holding her breath for two minutes

A 19-year-old woman has revealed what it’s like to be a full-time professional mermaid.

Madeleine Petty from Perth in Western Australia says she embarked on the unusual underwater career in October 2019, and can hold her breath for two minutes.

During performances, Ms Petty carries four kilograms of weights around her ankles and wears a three kilogram belt to help keep her below the surface.

‘If I don’t have weights I use all my energy to keep myself under. When I have weights I am able to glide through the water with grace,’ she told FEMAIL.

‘I am a previous ballet dancer so I always strive for an ethereal and effortless quality when I perform.’ 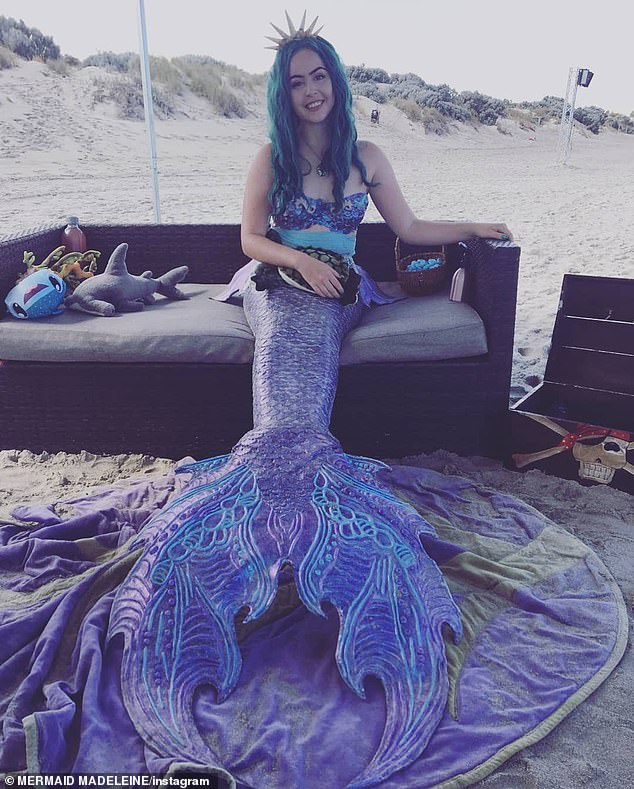 To become a mermaid Madeleine completed a course that involved free diving and swimming techniques with a monofin, which is a type of swimfin typically used in underwater sports.

After saving up, she finally bought a professional mermaid tail from Mermaid Kat Shop which is made from silicone.

It weighs 10 kilograms but is buoyant in the water.

Whenever she is wearing it on land for events she has to be wheeled around or even carried to wherever she needs to go.

‘I wanted to become a mermaid because I have always loved the ocean since I was little and really wanted to bring happiness to others through this role,’ she said.

‘I would have absolutely loved to have seen a real life mermaid when I was little so getting to bring that joy to children today is the most rewarding thing ever!’

Unfortunately she can’t actually see from inside the tank.

When it’s sunny she can only make out faint outlines of people but everything is ‘really blurry’ and salt water hurts her eyes.

Madeleine said it wasn’t easy, but she used relaxation methods to teach herself how to hold her breath for longer. 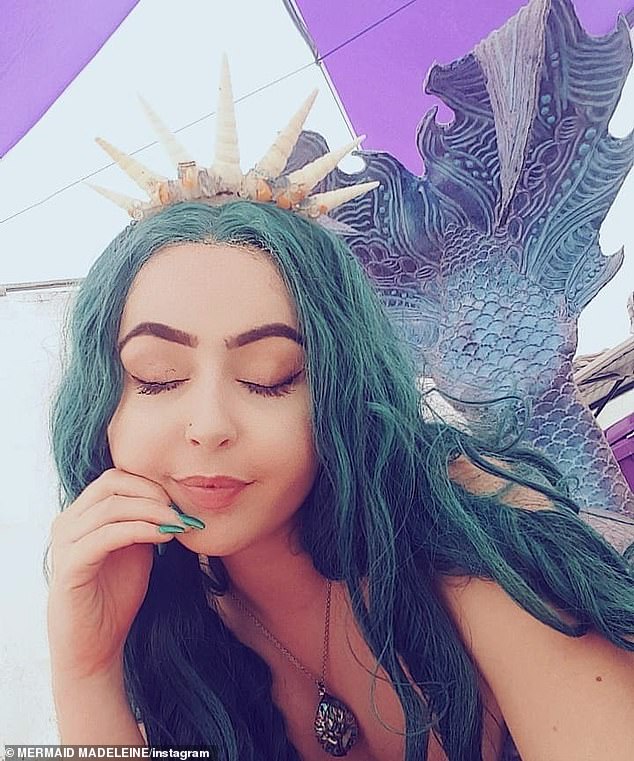 After saving up she finally purchased a professional mermaid tail from Mermaid Kat Shop which is made from silicone, weighs 10 kilos and is buoyant in the water

‘It was very tricky for me at first because previously being a ballet dancer I found it really hard to relax and lose tension,’ she said.

‘After lots of practice I’ve been able to get my breath hold up to two minutes in a meditative state, however it is completely different when you are swimming.’

Whileshe has already earned four figures, which will all go into the cost of a new tail, Madeleine said she doesn’t do it for the money. 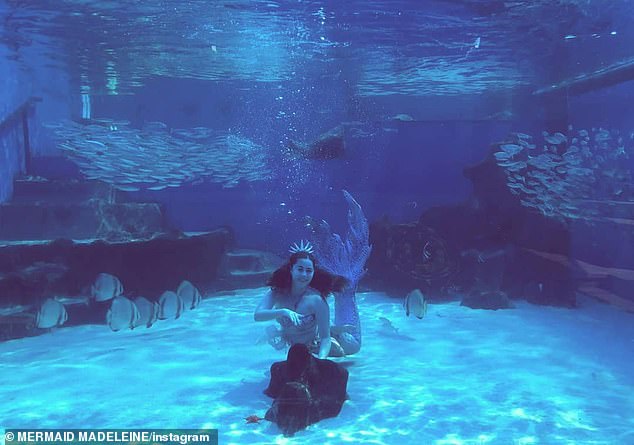 ‘I wanted to do it because I have always loved the ocean since I was little and really wanted to bring happiness to others through this role,’ she said 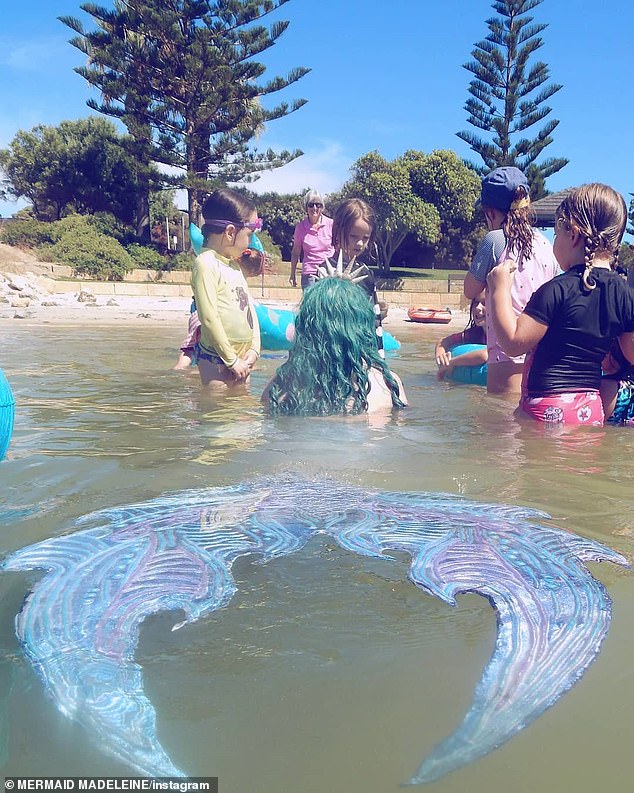 ‘You do this kind of job because you are passionate and you love it. Bringing so much happiness and magic into the lives of others is the most rewarding thing in the world to me,’ she said.

‘The interactions I have had with children have been so special and I will forever cherish those memories.’

She said mermaids had an important role as ambassadors for oceans and marine life – encouraging younger generations to protect ‘her home’. 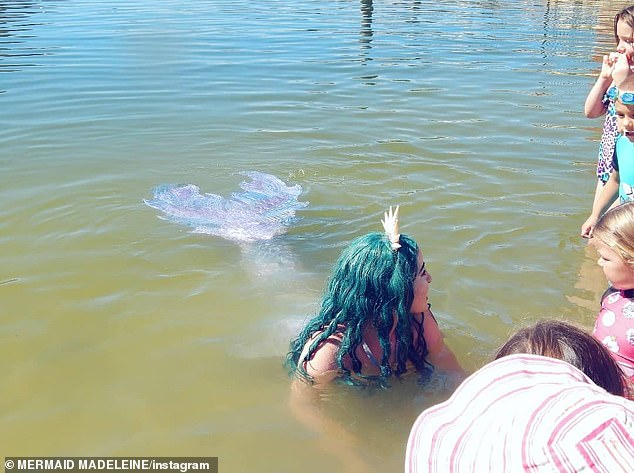 ‘You do this kind of job because you are passionate and you love it. Bringing so much happiness and magic into the lives of others is the most rewarding thing in the world to me,’ she said 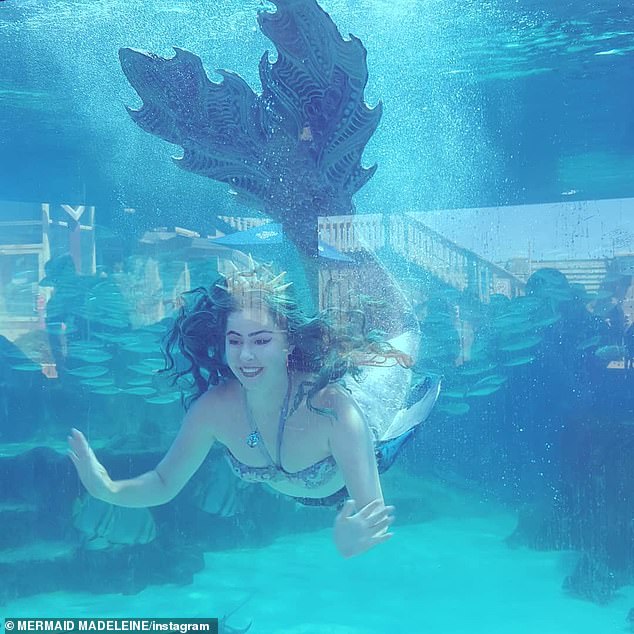 Being a mermaid involves many different tasks but first and foremost, it is to use the role as an ambassador for our oceans and marine life

Madeleine does appearances at children’s birthday parties, beach surprises, public appearances, corporate events and underwater performances at AQWA, The Aquarium of Western Australia, where she resides as a mermaid.

‘Not only do I do underwater shows for the public, I also have been able to do private shows and can even perform for weddings as AQWA is a great sea side location for wedding receptions,’ she said.

Madeleine said she has enjoyed a variety of different opportunities as a mermaid, attending charity events and even meeting the Perth Glory Soccer Team.

‘My favourite opportunity is being able to perform in the purpose built tank at AQWA with many different fish and baby eagle rays,’ the 19-year-old said.

‘I am a big believer in keeping the magic alive so after finishing shows I wear a hoodie and sunnies to hide my identity when I walk around with legs.’ 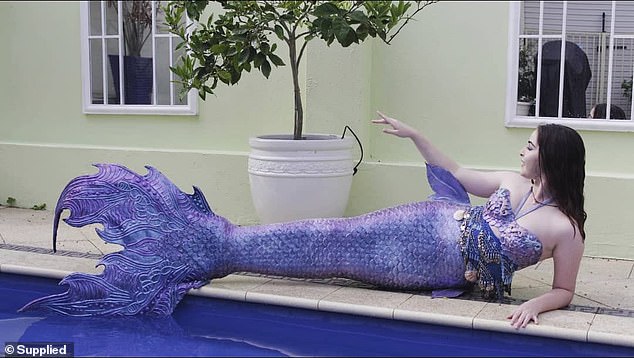