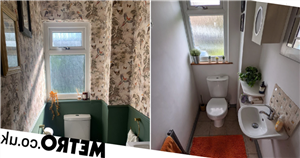 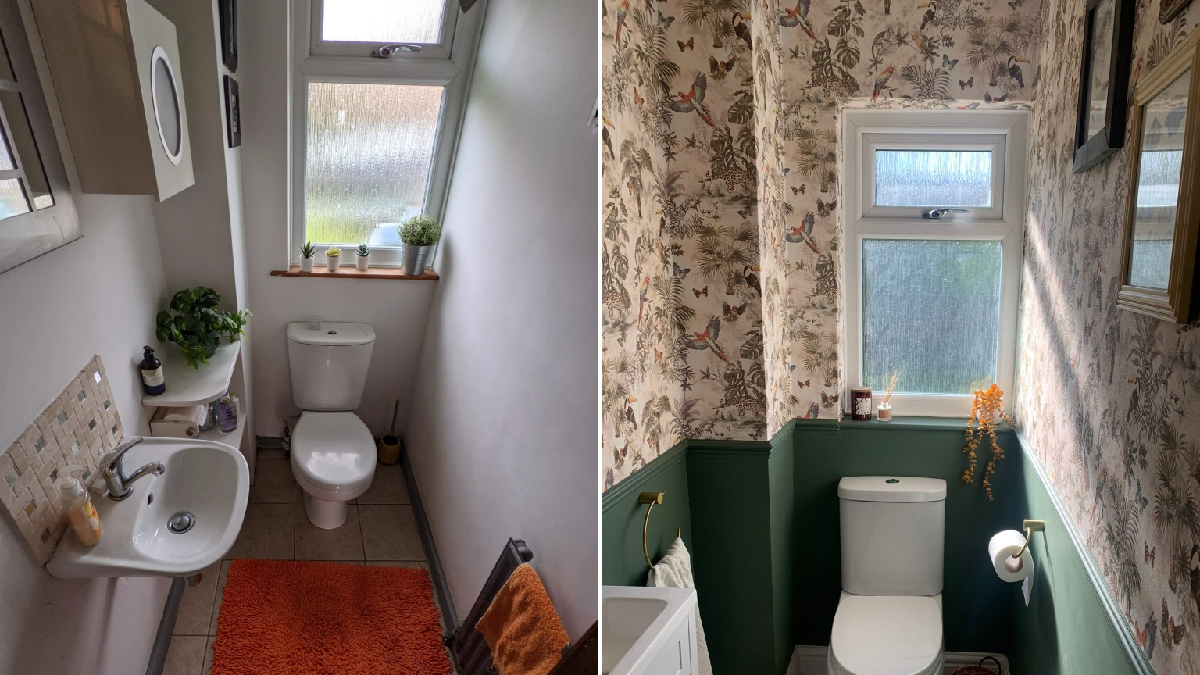 One woman took it upon herself to completely switch up her loo using a DIY approach.

Bonnie Bartlett, a teacher, wanted to go bolder with colour and design in her toilet room.

Since buying the property last year with her partner, she’s gradually been doing it up.

Before, the walls were white with basic tiling, but she wanted something more eye-catching.

She tells Metro.co.uk: ‘It’s really easy for a downstairs toilet to get left behind during a home renovation, but we thought it was a great spot to be a little bolder with our design choices.

‘As it’s a small space, we were able to be more daring with pattern and colour and I love the patterned wallpaper against the paint.

‘We broke up the sections by painting a dado rail in the same paint and creating a panelling effect.

‘We did everything ourselves including fitting the toilet and sink so we were able to save on costs there.

‘The finishing touches include the basket, picture frames and towel rail which were sourced from Facebook Marketplace and Dunelm.

‘I love the space we’ve created, it’s lifted what was a really mundane space and has given us confidence to try bolder looks elsewhere in the house too.’

In total, she spent £350 on renovating the room, looking for bargains along the way by buying second hand.

She says: ‘We tend to browse places like Facebook Marketplace and Hotukdeals quite a bit and have found some great bargains – the mirror was close to £50 from Argos, but we managed to get it for just £15.

‘Plus, as we haven’t had to rely on anyone else to help with decorating or fitting, we’ve definitely saved there too.

‘It was around £350 including the toilet, sink and vanity, wallpaper, accessories and paint – it was definitely worth doing everything ourselves to help save money.’

Once everything had been bought, the job took just a weekend to complete.

‘It was really handy that we were working on it ourselves as it meant we weren’t waiting around for tradespeople’s availability,’ she added.

‘It was a surprisingly quick job, although wallpapering around the window needed a little extra attention.

‘The wallpaper was probably the trickiest part due to the pattern and the area around the window – we nearly ran out as it was getting quite fiddly, but just managed to finish it off.’

Bonnie went for green as the rest of the house has various green hues, but they wanted a bolder wallpaper.

Bonnie adds: ‘We wanted to put our mark on our new house quite quickly but still on a budget, so DIY was the best option.

‘We both think quite creatively and logically about how we can achieve the looks we want, so it’s always fun taking on a new project.

‘Obviously larger spaces like the hallway, kitchen and bedroom have been longer projects, so being able to set our minds to the downstairs bathroom and achieve a finished result relatively quickly has been really rewarding.

‘It really wasn’t our style at all before, and now we’ll probably do as much as possible by ourselves.’