A savvy homeowner has revealed she uses a teabag to clean all of her chrome and glass – and the handy hack has been branded a ‘game changer.’

Tuesday Veal, from Greater Manchester, shared impressive before and after pictures of her glass microwave door to Facebook group, Mrs Hinch Cleaning Tips and simply penned: ‘Glass cleaner vs tea!’

And social media users were quick to take to the comments section, with many admitting they had raced to fill spray bottles up with the much-loved tipple to try it out for themselves.

‘It’s amazing I have been up all night cleaning anything I could get my hands on,’ enthused one, while a second penned: ‘Even my engagement ring! This is going to do a lot of harm to a lot of BIG business My mirrors and windows are looking good.’ 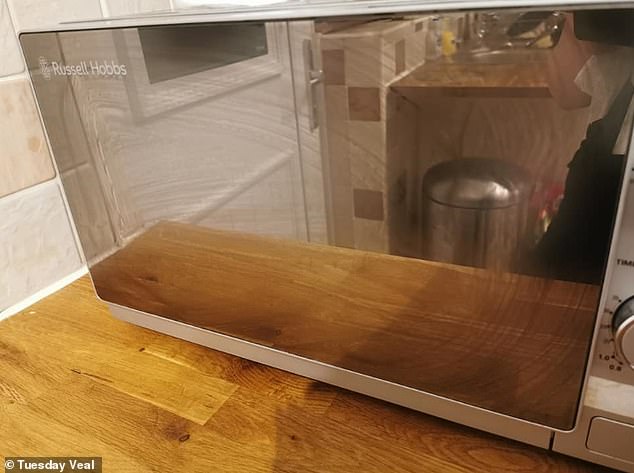 Tuesday Veal, from Greater Manchester, revealed her microwave was left gleaming after she cleaned it using a teabag. Pictured before, with smears on the glass 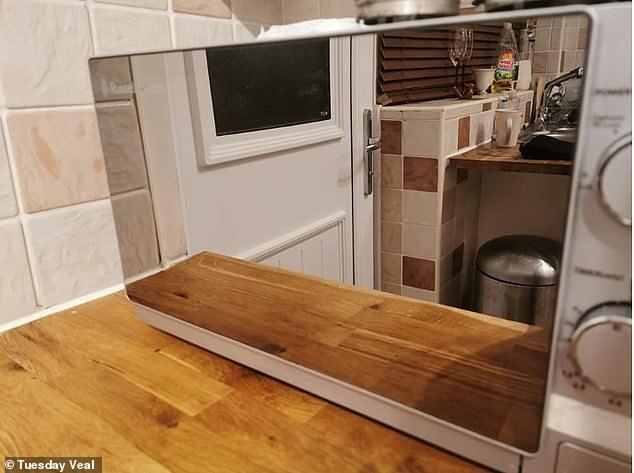 The savvy homeowner was left more than impressed after trying the handy hack for herself. Pictured, the microwave glass after using a teabag

The before snap of the microwave, which was cleaned using an everyday window product, shows smears all across the front of the glass door.

However, the second photo, taken after being cleaned with a teabag, shows the kitchen appliance gleaming.

Many keen to jump on the bandwagon were eager to hear the finer details of Tuesday’s tactics – and fortunately, she shared a further post explaining all.

‘One Yorkshire teabag in a mug of boiling water, left until the water was cold (I was cleaning my oven at the time, so I actually forgot about the tea) . Then I dipped the corner of Blitz kitchen roll into the tea and wiped it over the microwave,’ she said. 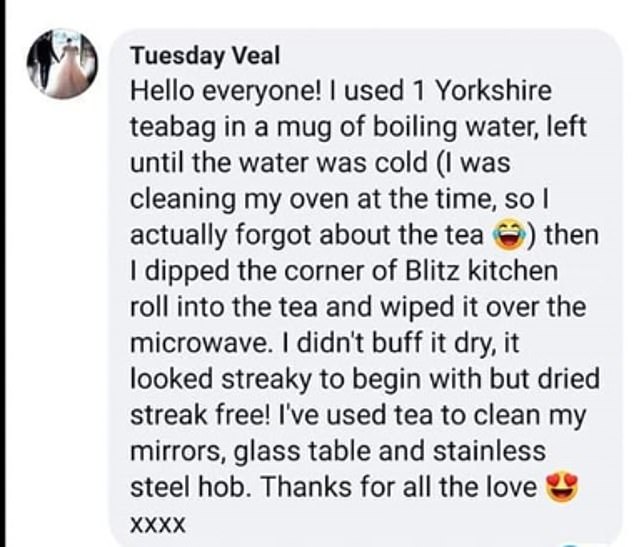 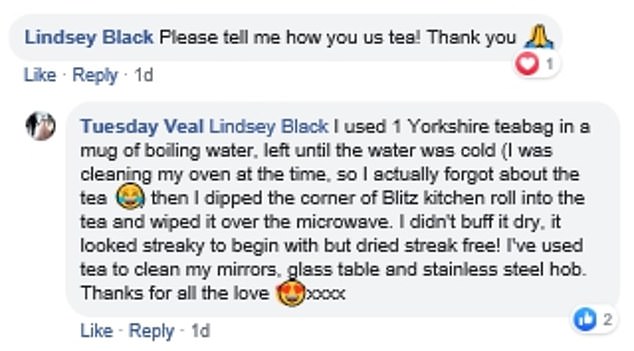 Tuesday went on to explain exactly how she achieved the gleaming new look and said she used one Yorkshire teabag in a mug of boiling water, left until the water was cold, before dipped the corner of a kitchen roll into the tea and getting to work (pictured)

‘I didn’t buff it dry, it looked streaky to begin with but dried streak free!

‘I’ve used tea to clean my mirrors, glass table and stainless steel hob. Thanks for all the love.’

Those who had already tried and tested the method were full of praise for the idea, while others were preparing to give it a whirl themselves.

‘It’s amazing did it yesterday,’ praised one, while a second wrote: ‘I’ve got a jug of tea brewing and an empty spray bottle ready to go crazy with.’

A third added: ‘Must try this,’ while a fourth commented: ‘I rubbed a used tea bag still damp on my mirrored microwave door and it came up lovely once I buffed it.’

A further joked: ‘What sort of witchcraft is this? Excellent result!’

While one branded the hack a ‘game changer,’ another admitted she was left with an ‘excellent result’ after trying it out for herself (pictured)