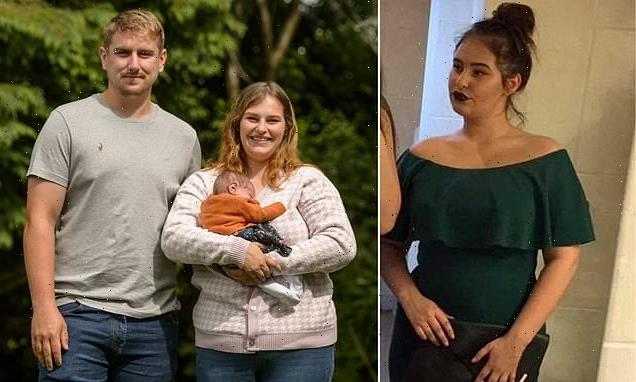 New mother, 25, claims she didn’t know she was pregnant until she went into LABOUR on a girls night out and thought the 1.5st she’d gained was ‘lockdown weight’

A woman went into labour with a surprise baby – after she started having contractions on a cocktail night out with the girls.

Support worker, Lavinia Stanton, 23, experienced ‘the shock of her life’ after welcoming little Willow into the world last month with her partner electrician Cameron Wroot, 25.

The mum-of-one from Halifax, West Yorkshire, left the restaurant at 10pm after experiencing cramps – which she later found out were contractions – and decided to visit her mum’s house nearby.

Lavinia’s own mother, hairdresser, Amanda Hardcastle, 42, waited an hour before calling 111 and was told by the caller to pop to hospital if her daughter’s pain continued to get worse. 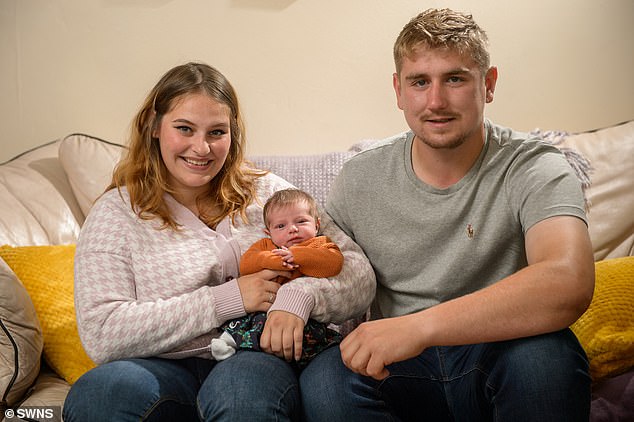 Support worker Lavinia Stanton, had baby Willow just hours after finding out she was pregnant, pictured with partner, Cameron Wroot, at home near Halifax, West York 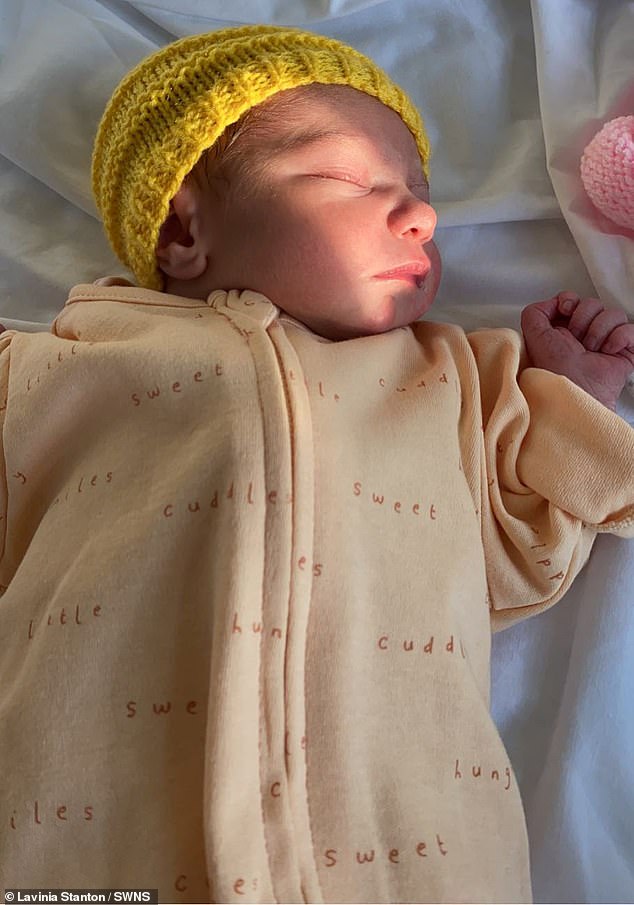 A shocked Lavinia was rushed to the labour ward with baby Willow born via c-section weighing 6lb 1oz at 8:54am. Pictured: Baby Willow sleeping shortly after birth 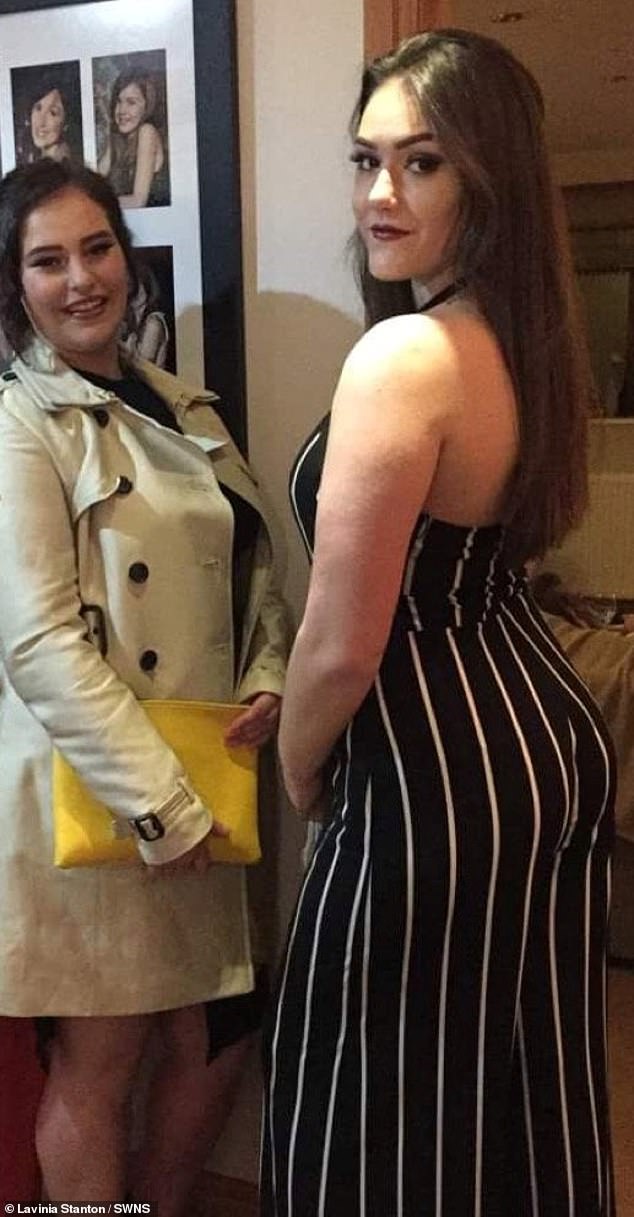 The pair visited her local A&E at 2am where she was asked to do a urine sample and within minutes doctors confirmed she was in labour.

A shocked Lavinia was rushed to the labour ward with baby Willow born via c-section weighing 6lb 1oz at 8:54am.

She said she had periods throughout the hidden pregnancy and had two negative pregnancy tests just weeks before her surprise bundle of joy arrived. 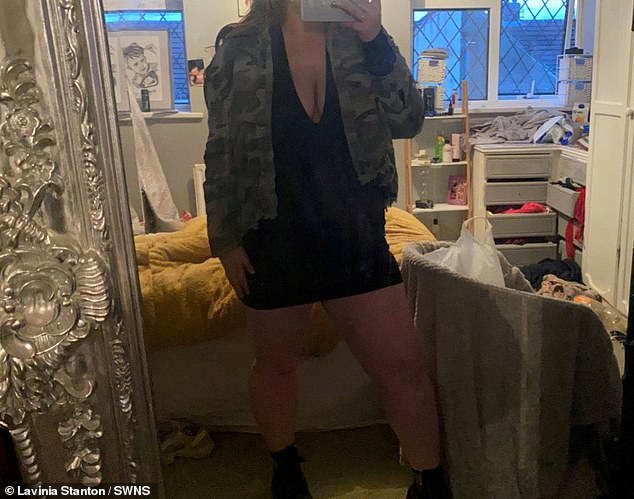 Lavinia and Cameron have spent the past few weeks getting their head around being first-time parents. Pictured during her pregnancy

Both she and Cameron have spent the past few weeks getting their head around being first-time parents.

Lavinia, from Halifax, west Yorks, who thought the few extra pounds she had put on was just ‘lockdown weight’, said: ‘I’m still in shock.

‘A few weeks have passed now and I’m slowly getting into the swing of things.

‘Sure I put on a bit of weight recently but thought that was just lockdown weight like everyone else.’ 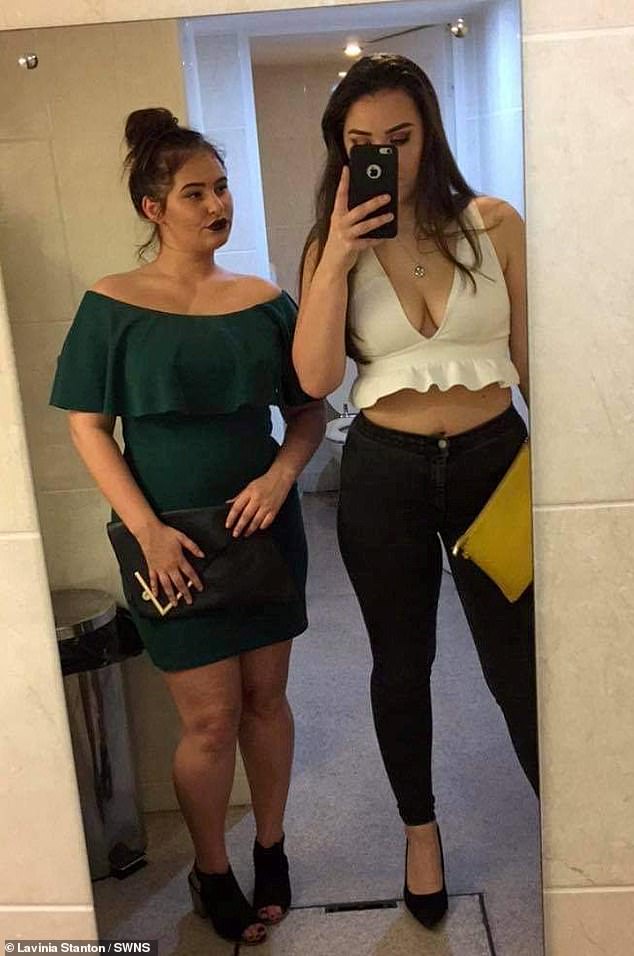 Lavinia thought she had put on a bit of weight but assumed that it was just lockdown weight like everyone else. Pictured during her pregnancy (left)

‘I went out to see my friends for dinner and a few drinks. With everything opening it was just seemed like a normal night.

‘When we were leaving it was a really bad pain so I visited my mum’s to have a lie down.

‘She said to leave it an hour before calling 111 to see if the pain passed but it was really quite painful. 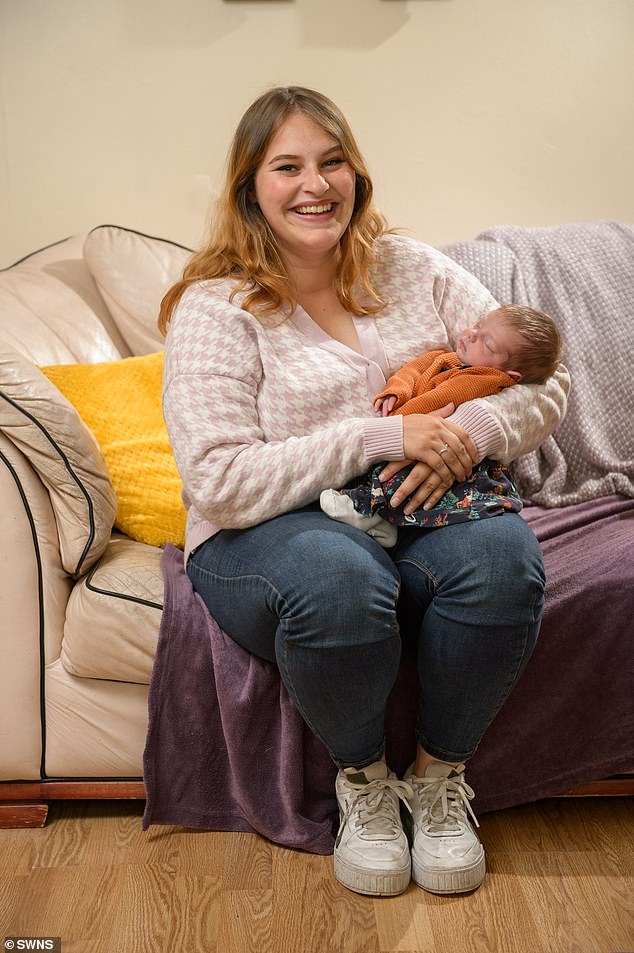 ‘Even when my mum was calling 111 she even said ‘it’s like she’s having contractions’ but that was just a passing comment.

‘The 111 caller couldn’t really diagnose it and suggested going to A&E if the pain didn’t go away.’

‘When I got there I thought they would say I had appendicitis or had some sort of infection.’

‘The doctors saw the pain I was in and looking back I think they sort of knew. 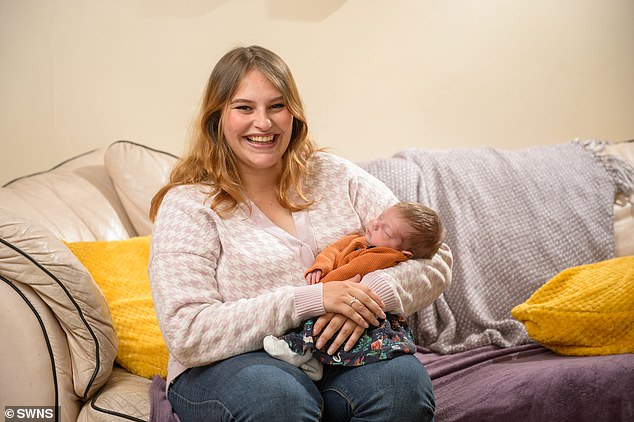 ‘I did a urine test and then they came back telling me I was being moved to a different ward and that I was in labour.

‘I think I was just silent and then came out with, “Are you joking?”.

‘I genuinely was not expecting to be told I was not only pregnant, but my baby was on the way.

‘I genuinely had no idea. Neither did anyone else. 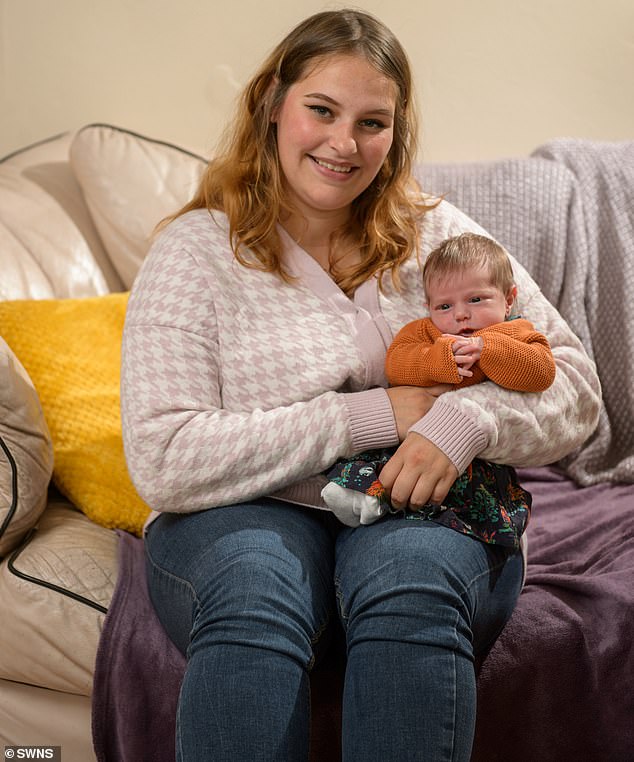 The support worker had periods throughout the hidden pregnancy and had two negative pregnancy tests just weeks before her surprise bundle of joy arrived. Pictured at 2.5 weeks old 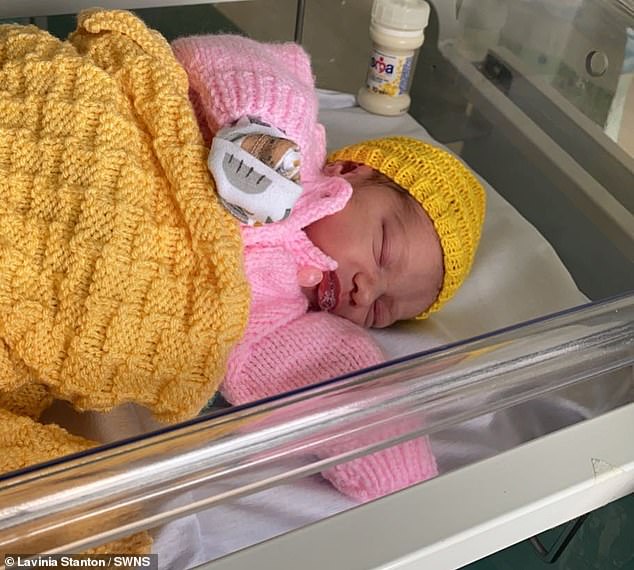 Lavinia took her second pregnancy test a month before she gave birth. She was getting bad stomach pains which would leave her unable to walk

‘I hadn’t done anything crazy during that time like bungee jump off a cliff but I was still working long hours throughout it.

‘I hadn’t experienced any symptoms of pregnancy.

‘No morning sickness, no kicking in the tummy, nothing.

‘I did two pregnancy tests a few weeks before but they came back negative.

‘My friend told me to take one when I had a really bad migraine and ended up being sick.

‘The second one was a month before I gave birth. I was getting really bad stomach pains which would leave me unable to walk for a minute or so.’

‘But again that came back negative.

‘I’d put on around a stone and a half but I put that down to lockdown weight. 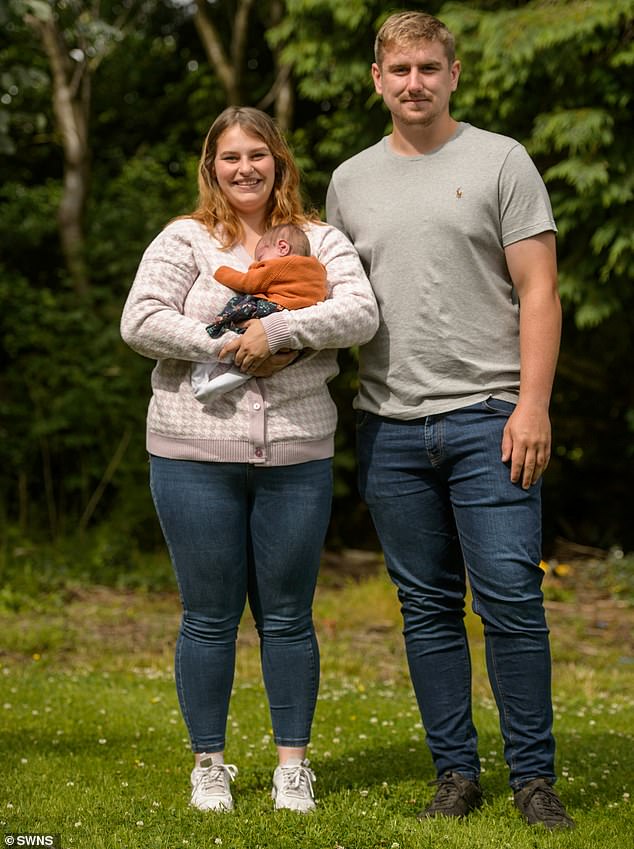 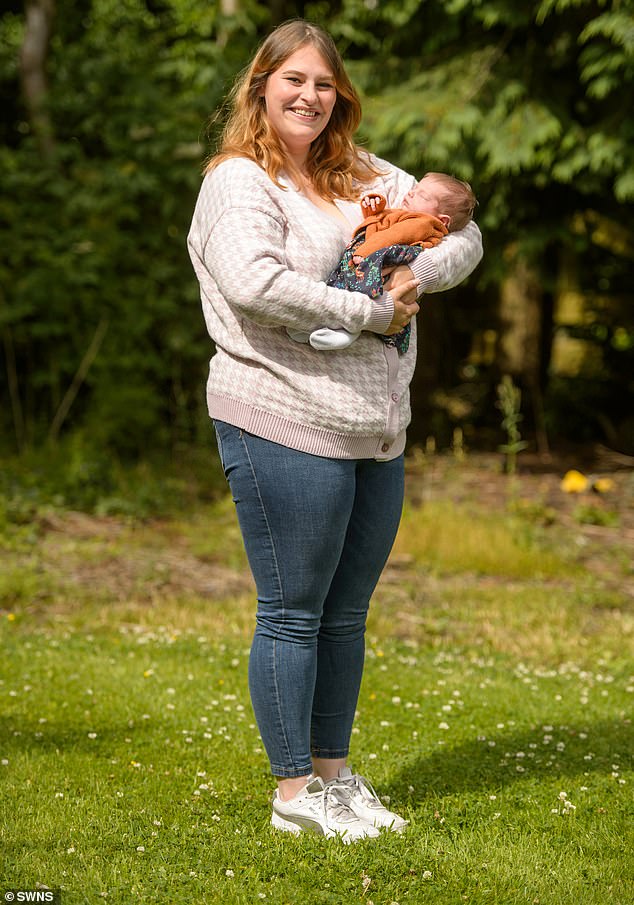 Four days before Lavinia gave birth her partner mentioned that she looked a little different, not knowing that she was actually 38 weeks pregnant

‘I didn’t look like I had a pregnant belly, just that I had gone up a dress size.’

‘I had pains in my stomach the week beforehand but it felt like a cramp.’

‘Even my partner didn’t clock. When he came to visit me in hospital we were speaking about it.’

‘He said that he thought I looked a bit different four days earlier. But I had Willow in me for 38 weeks!’

‘At the start of the pandemic I wouldn’t have thought I’d have a daughter near the end.’

‘But she’s here and Cameron and I are in love with her.’

How common are cryptic pregnancies?

One in 450 pregnant women in the UK don’t know they are going to have a baby until week 20 of their pregnancy (half-way through), and one in 2,500 women are oblivious to the fact until they go into labour.

It’s a phenomenon known as cryptic pregnancy – also referred to as ‘pregnancy denial’.

Cryptic pregnancies typically affect either young women, who have never experienced a pregnancy, or women who believe they’ve gone through the menopause and who choose not to use contraception.

Women with erratic menstrual cycles are also more likely to miss signs they are expecting. This is especially true among women with polycystic ovary syndrome (PCOS), where small cysts grow on the ovaries; the hormone imbalance often leads to irregular or non-existent periods.

Yet there are some women who will continue to have monthly bleeds throughout their pregnancy. In this case, a scan at the local GP may be the only method of confirmation.

Women may simply not expect to find they are pregnant if they are taking the Pill – but then those taking it religiously can still become pregnant.

Eight in 100 women can get pregnant while on the Pill – usually not because of problems with the Pill, but with the taker, either because they’ve missed the Pill, thrown up or had diarrhoea.