‘The water in the bath didn’t cover my whole belly’: Women confess the most RIDICULOUS things they cried about during pregnancy – including one who broke down over a mozzarella stick

A hilarious viral Facebook has seen hundreds of women revealing the most bizarre things they cried over during pregnancy.

Shared in a group called Midnight Confessions: Sex And Relationship Advice, the post asked women to share the funniest things they cried over when they were expecting a baby.

The bizarre answers included crying over dropping a pencil, getting emotional over a photograph being hung crooked on a wall and becoming upset when a food delivery took longer than expected. 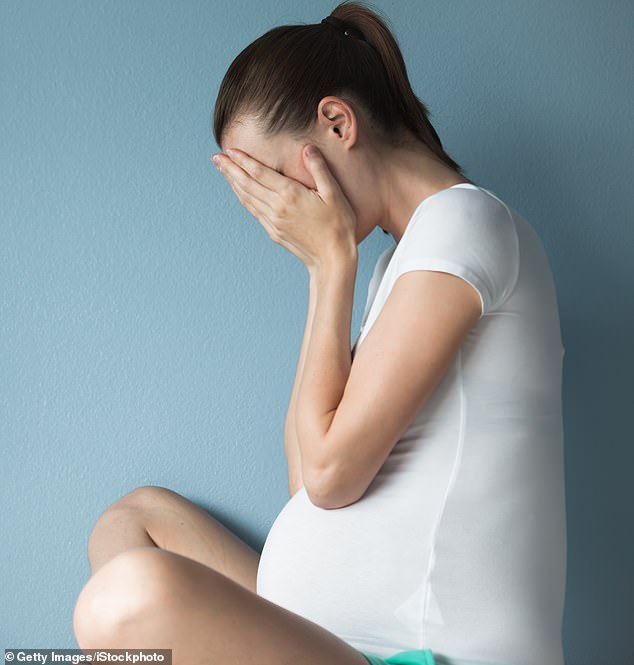 Funny: Hundreds of women have revealed the silliest thing they ever cried about during pregnancy in a viral Facebook post (stock image)

Since the post was shared on Wednesday, June 12, it has garnered more than 600 likes and over 2,000 comments.

Some of the ‘silly’ things women have found themselves crying over during their pregnancy included simply day-to-day situations.

One woman said walking up the stairs made her upset, as she wanted  to carry two things up the stairs and she knew she would have to leave one behind in order to be able to hold onto the railing for support.

She said: ‘Had to walk up the stairs knowing full well that I’d need to hold the railing; I bawled like a baby because I had ice cream and a box of cookies in each hand and I had to make two trips to have both.’

Another woman said she got upset over a mozzarella stick.

‘It was 99 cent mozzarella stick day (4 piece) at sonic a week ago,’ one woman said. ‘I told my husband I wanted 2… meaning 2 orders DUHHHHHH. This fool eats 2 on the way home and literally gives me 2 sticks. I’m still not over it yet.’

Similarly, another mother wrote: ‘My cousin drank some of my sunny d and I literally screamed at him that he’s taking juice away from the baby.

‘I cried all day over that. And my cousin never lets me forget it lol he’s a very patient man lol,’ she added.

‘I had a dream i was eating hot wings, woke up at 3am and told my son dad i wanted hot wings,’ another women said.

Another food-related response involved one woman crying because Chic-fil-A wasn’t open one day that she wanted to eat at the fast food chain.

She said: ‘I go up one morning after dreaming about milkshakes all night, go dressed and drove to chick-fil-A only to realize it was Sunday.

‘I cried in front of the driver through menu and called my husband at work. He laughed but he brought me a red velvet cake and a tub of ice cream home. I cried again because I was so happy,’ she added.

One hilarious comment saw a woman revealing an emotional experience she had with her husband while pregnant.

She said: ‘When my husband and I had our last child he was in the military. I was eight month [sic] pregnant he came home from duty that day and I was sweeping.

‘He asks me how my day was and I burst into tears. “I was only put on this earth to clean, cook, and make babies for you. You don’t love me!” He took the broom and ordered supper and a baby sitter for the kids.

‘Took me out shopping, and to dinner and a movie. On the way home I told him I was sorry for my emotions getting the better of me.

‘This man looks me straight in the face and says “it wasn’t you its the baby. You like me the baby don’t know me yet so she’s messing with your mind,”‘ she added.

Hysterical: Among the funniest answers was a response from one woman saying she cried when she was watching the Kentucky Derby, and one woman who cried over a crooked picture

Among the hundreds of responses were several from men recalling hilarious stories about their partners during pregnancy.

‘Bm called me one time balling cause she got sent outside to take a break cause she had an emotional break when she dropped her pencil at work,’ one man said.

Another man said his wife cooked a meal for their friends, but got emotional when it didn’t turn out as good as she had hoped.

One woman listed several different things she got upset about during pregnancy, including her water bottle getting lost in work, because she ‘couldn’t decide which Tylenol to get from the store’ and her husband laughed and walked away from her.

Another revealed that watching the Kentucky Derby made her upset because she was ‘so proud’ of the horses.

‘I cried once because a picture in the doctor’s office was slightly crooked,’ another woman hilariously revealed.

One mother said she was so ‘devastated’ she was turning 25 that she burst into tears,’ while another said she got upset because water in her bath wouldn’t cover her entire stomach.